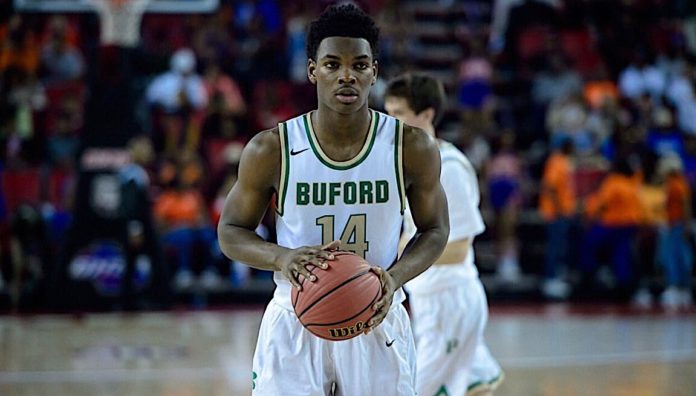 We took in Opening Day at the 44th Annual Kingdom of the Sun tournament held annually at Vanguard High School in Ocala.  An institution among high school basketball tournaments, not just in Florida but the country, the Kingdom year in and year out brings in some of the best talent from around the state as well as solid teams from other parts of the country.

Essentially two local teams brought a good crowd to the 10:00AM game to start the event.  The teams traded baskets early in the first until GHS scored three quick ones to up 12-6 midway thru the period to force a Wildwood time out.  The Wildcats got back on track but still trailed 16-11 after one quarter.  Gainesville stretched its margin in the second with a 12-3 over the last three minutes to lead 34-23 at the half.

Wildwood made a small dent in the margin during the third quarter but still was down by ten at 49-39 heading into the fourth.  A 5-0 run by Gainesville to start the period looked to be the Wildwood death knell.  At the four minute mark the score was 58-45 and the outcome look secured.  At that point Wildwood put together a 10-0 spurt to get to within 58-55 with 1:22 to play.  Wildwood had the ball and missed a three, so they fouled to stop the clock and get the ball back.  Gainesville missed the front end of the one-and-one, but retrieved the rebound.  Wildwood fouled again.  Once again, Gainesville missed the front end.  Once again, Gainesville retrieved the rebound.  This time after the Wildwood foul, Gainesville converted one of two free throws for a four point lead.  Wildwood would not be able to get a good look in time to make up the deficit and Gainesville moves on with a 59-55 win.

Gainesville was led by Dallas Tealer with 20 points while Christian Miller-Cardwell tossed in 12 points.

Buford is one of the better teams in Georgia’s 5A class while Winter Haven is considered a favorite to get to Lakeland out of their region.  Buford got out fast with two quick scored but Winter Haven did all it could to stay with them.  After one quarter, it was a four point game at 22-18 in favor of Buford.

With four minutes left in the first half, it was still a four point game at 30-26.  That’s when something bizarre happen to completely change the game.  Buford scored a transition basket and immediately afterward an intentional foul was called on Winter Haven.  Buford made both free throws and got the ball back.  On that possession, they drained a three.  So for all intents and purposes, Buford finished with a seven point possession!  That made it an eleven point game.  Winter Haven played the rest of the half in a funk and went into the locker room down fourteen at 44-30.

In the third quarter, Winter Haven played evenly with Buford but was still down thirteen at 62-49 with one period left to play.  At the four minute mark, Winter Haven was within ten at 68-58 but Buford then hit a three, and all of the fight went out of the Blue Devils.  Buford finished the game on a 15-6 run to win going away, 83-64.

Winter Haven was led by Keyshawn Bryant with 23 points.  Bryan Birdson added 12 points and both Dorian James and T.J. Anglin finished with 10 points.

Lakewood Ranch came in battle-tested, having already played three games against national competition, finishing 1-2, at the City of Palms.  Victory stayed right with them for the first four minutes as Lakewood Ranch led by just two at 12-10 with four minutes played.  A 15-4 run by Lakewood Ranch to finish out the first period made the scored 27-14 and pretty much left little doubt as to who would win this contest.  While a running clock was never truly on the horizon, the margin never did get below twenty until Lakewood Ranch put in their subs with just under three minutes to play.  Victory Christian kept at it but still fell short by eighteen, 75-57.

Lakewood Ranch placed five players in double figures.  Christian Shaneyfelt led the way with 18 points.  Jack Kelly had 15, Josh Young had 12 and both Damien Gordon and Ken Buckley had 11 points.

Rockledge came into the contest undefeated while WA is playing solid basketball thanks to its solid quartet of perimeter players.  It was also a chance to see Zack Scott and Elijah Weaver, two of the top guards in Florida’s 2018 Class go at it.

Westminster led midway thru the opening quarter 9-8 but Rockledge tied the game at 11 with two minutes left to play.  The score was tied at 13 heading into the second quarter.  Early in the second, Rockledge’s Zay Stevens hit a trio of shots from beyond the arc and gave Rockledge at 28-20 lead with four minutes to play in the half.  Westminster cut the margin a bit but half time Rockledge led by five at 32-27.

Rockledge started the third quarter on an 11-0 run over the first two minutes of play, forcing a Westminster time out.  That effectively put the game out of reach.  Rockledge led by fourteen going into the fourth quarter and ultimately won by twenty at 77-57.

Apopka fell behind 6-1 early and called a timeout at the six minute mark.  Coach Scott Williams must have uttered the magic words as Apopka outscored Mt. Carmel 12-4 to lead by three at 13-10 heading into the second.  Apopka led by just four at 21-17 midway thru the second period but finished the half strong, going on an 8-1 run to lead by double digits, 29-18, at the half.

Mt. Carmel began to mount a comeback after the break.  Still down ten heading into the fourth period.  Mt. Carmel put together a 13-6 run to make it a three point game at the five minute mark.  Apopka led by just two with under three minutes to play and things got very interesting.  With one minute to play and down one at 47-46, Mt. Carmel converted a three point play.  Apopka could only make one of two free throws to get within one with fifteen seconds to play.  Mt. Carmel was fouled but hit only one of two free throws, making the score 50-48 with ten seconds to play.  Sadly, Apopka turned the ball over with five seconds before they could get off a shot.  Mt. Carmel had finished a stirring comeback to win by two at 50-48.

Apopka was led by Nate Louis with 17 points while Rodney Lubin added 10 points.

Snyder started the game strong with a 7-0 run but North Marion got to within one at 9-8 with 3:30 left in the opening period.  Snyder would be on top by six at 18-12 heading into the second quarter.  It was all Bishop Snyder in the second quarter as they raced out to double digit lead early on a maintained it.  At the half, Bishop Snyder was up by fourteen at 34-20 and looked in complete control.

North Marion had its chances in the third to severely trim the deficit but Bishop Snyder had an answer each time.  Down eleven at 48-37 entering the fourth, North Marion started to put its superior speed to work.  At the four minute mark, they had cut the margin to five at 53-48 and had all the momentum on their side.  The Colts got it to within three on several occasions in the closing minutes of the fourth but could never score that bucket that would give them a lead.  Bishop Snyder would hold on to win by three at 61-58.

North Marion’s Kenuiel Gaines had 15 points while Jacarey Rollerson had 12 and Blake Bradley finished with 10 points.

While this game was intriguing simple from the names of the schools, it became apparent that the “original” Vanguard was superior to the “newbie” early on.  The host Knights led 20-5 after the first quarter and by 21 at 38-17.  A 15-0 run to start to third period kicked in the running clock and Vanguard of Ocala would breeze into the next round with a 63-36 win.

OCP is one of the top teams in the state despite a 4-4 record heading into the game.  Stranahan starts four sophomores and a junior but came in 7-0.  OCP struck first and led 16-9 after one quarter of play.  They would stretch that lead out and double up Stranahan at 33-16 heading into halftime.

Stranahan was able to keep pace with OCP in the third quarter, but that only meant they were down by sixteen at 51-35 with one quarter to play.  Things started getting a little chippy between the two teams in fourth which led to some selfish and sloppy play on both sides.  Stranahan would try valiantly but could never get the deficit under double digits.  OCP would ultimately win by twelve, 62-50.

Nassir Little paced OCP with 18 points, including a couple of slams that drove the youngsters in the crowd into a frenzy.  DeQuan Lockett and Renaldo Segu each added 14 points for OCP.

Stranahan was led by Inady Legiste with 14 points.  Elijah Reyes had 11 and Dave Harard finished with 10 points.