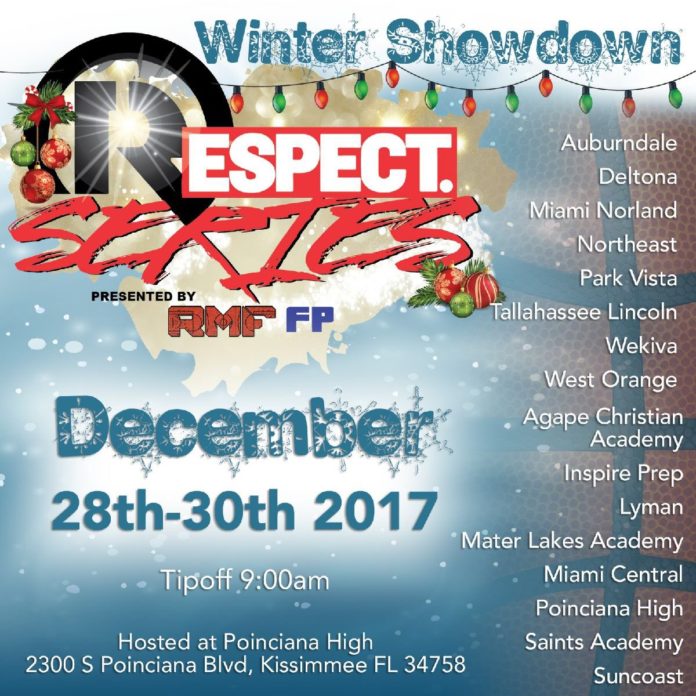 The 2017 Respect Series Winter Showdown is being held this week at Poinciana High School.  Two separate eight-team events in one location produce wall-to-wall basketball thanks to the combined efforts of Florida Prospects and RMF Magazine.

Inspires plays out of the SIAA and it is always interesting when an independent goes up against a member of the FHSAA.  It was Lyman that jumped out quickly to an 8-3 lead four minutes into the first.  Inspire became inspired and made a run to tie the score at ten after one quarter of play.  Lyman opened up the second quarter with an 11-3 spurt highlighted by a transition slam from Tyrese Porter to make it 21-13 midway thru the second.  Thanks to the jump shooting of Inspire’s Khalyl Simmons, six straight points brought them back to with two points.  That would be the margin at the half with the score 23-21 in favor of Lyman.

Just like the first and second quarters, Lyman got out to a multi-possession lead to begin the third.  This time, Inspire didn’t have an answer.  They were down by eleven heading into the fourth quarter and never really found a way to get stops on defense and put together successive scoring possession to close the gap.  Lyman would go on to win by ten, 63-53.

For Inspire, Simmons led the way with 19 points.  Teammate Jalil Melvin added 11 points to the cause.

Agape got to the venue just in time and with only seven players.  That was a foreshadowing of things to come.  Suncoast got out to a fast 8-0 lead and led by ten after one quarter of play, 19-9.  That gap would widen to over twenty at the half and Agape never seriously threatened.  The final score was 72-55 in favor of Suncoast.

The Chargers were led by Makye Boles with 15 points while Torrin Andrews added 11 points.

For Agape, Shamoi Clemence led all scorers with 25 points.

Lincoln grabbed a quick lead but Park Vista never let them get more than a bucket ahead.  Heading into the second quarter, Lincoln led by just one at 16-15.  Lincoln still led by one midway thru the second quarter when Vista went on an 8-0 run to take a three point lead.  However, Lincoln came right back with five quick points to reassume control and led by four at the half, 29-25.

It didn’t take long for Lincoln to go up by nine in the third.  A three from Park Vista made it 36-30 with just under four minutes to go in the period.  At that point, Lincoln erupted with a 10-2 run to make it a fourteen point lead, 46-32 with one quarter left to play.  With 3:30 left in the game, Lincoln was up eighteen at 54-36 and the game looked over.  Park Vista had other plans.  They turned Lincoln over and hit threes on their end.  With one minute left to play, the score was 60-54 and it was Lincoln who was treading water.  Sadly, with no shot clock, Lincoln could hold the ball and force Park Vista to foul.  Lincoln was able to connect from the free throw line and win by ten at 64-54.

Both teams were very sluggish to open the game.  Central scored the first six points of the contest within the first few minutes while holding All Saints scoreless.  The first quarter ended with Central up 6-2.  Things got a little bit better in the second and All Saints made up ground to close within two at 20-18 at the half.

The second half was a much better basketball game.  Both teams found their offensive rhythm and started hitting jump shots.  Central maintained their lead until the very end of the third quarter when All Saints tied the score at 32.  The fourth quarter was a back and forth affair and things got interesting very quickly.  With one minute to play, All Saints hit a three to take their first lead at 46-44.  Miami Central responded with a three of their own with forty seconds left to grab the lead back by one.  All Saints had possession but turned the ball over with 25 seconds to play.  Central was able to play keep away and hold on for a 47-46 win.

Miami Central was led by Keondre Jackson with 17 points while Alvin Walls paced All Saints with 13 points.

Both teams are known for being mentally tough and physical teams.  That was evident in the first quarter as Wekiva was able to slow down Northeast to lead by one at 11-10.  In the second, Northeast was able to speed up the game to their liking.  Their three point shots started to fall and they not only took the lead but extended it.  At the half they led by nine at 37-28.

A 9-4 run extended Northeast’s lead at the six minute mark and forced a Wekiva timeout.  At the midway point of the third, Northeast led 51-37 and looked in complete control.  That was far from the case as Wekiva flexed its muscles with a half-court trap that repeatedly turned Northeast over.  This produced a 16-5 Wekiva run to make it a three point 56-53 game heading into the final period.  However, Wekiva was a bit gassed after making its comeback and Northeast was able to hold onto their lead the entire fourth quarter to win by a score of 72-65.

Wekiva’s Jeremy Johnson led all scorers with 24 points and Roderick Perry complemented him with 14 points.

We were looking forward to seeing both teams as Poinciana has developed into a solid program in Central Florida while MLA is on the rise in South Florida.  The entire first quarter and half of the second quarter found MLA on top but only by a bucket or two at most.  MLA finished off the second quarter with a 13-7 run to take a one point lead to seven points at 36-29.

MLA maintained that lead for the entire third quarter and led by six at 55-49 heading into the final period.  That lead didn’t last long as Poinciana tied the score at 55 by the six minute mark.  MLA answered swiftly with a 6-0 run of their own to push their lead back to six.  Poinciana would get close on a couple of occasion the rest of the way but never was able to take a lead.  MLA would earn a difficult four point win by the score of 67-63.

Dominic Rivera led MLA with 20 points while Cyrus Largie had 17 and Ceasar Linarez finished with 10 points.

Norland seemed the fresher of the two teams at the start of the contest and out quickly to a lead.  The Vikings led by eight at 20-12 heading into the second quarter.  West Orange had a tough time establishing any kind of offense and Norland took advantage of that in the period to go up by ten at the half 33-23.

West Orange made the necessary adjustments at the half to get back into the game.  Their 1-3-1 half-court trap caused Norland some issues and by the midway point of the third were back within striking range at 40-34.  Thanks to a trio of threes from West Orange, the Warriors took their first lead at 43-42 with 2:30 left in the third.  West Orange was up by two at 46-44 to start the final quarter.  Norland eventually got itself back together and tied the score at 53 with four minutes to go.  The Vikings were unable to sustain their momentum and West Orange finished the game with a 10-3 run thanks to some timely foul shooting to win by the score of 63-56.

Norland was led by Omar Rolle with 24 points with Chris Spenkuch adding 12 points and Cameron Gatlin finishing with 10 points.