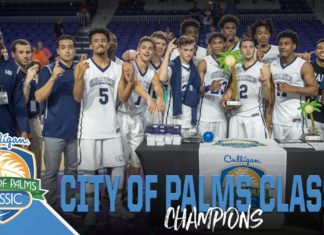 Our friends along media row will puff this matchup as being all about U-School’ Vernon Carey vs. East’s James Wiseman in the bid for #1 in the 2019 Class.  However, as both teams have showed this week, they are sooo much more than just those players.  What it will most likely come down to is can U-School score over, under, around, or through the tremendous length that is Memphis East.

A three from Ryan Boyce of Memphis East got the game started.  Trey Doomes put U-School on the board with two free throws.  A free throw by Antavion McCallum of East was answered by a Doomes free throw.  From there East went on an 8-0 run as Alex Lomax hit a three in transition, Boyce knocked down a three and McCallum scored inside to make it 12-3 in favor of East with just under five minutes to play.  U-School was undaunted, however as Drue Drinnon hit a free throw, Carey made a free throw, and Scottie Barnes threw down a pair of dunks on the break to make the score 12-9 with just over two minutes to play in the period.  East answered back with four straight points and after Doomes dunked home a baseline drive, the score after one period was 16-11 in favor of Memphis East.

Barnes knocked down a long two to open the quarter but a three from Derrin Merriweather increased East’s lead.  The teams traded two pointers, then U-School went on a 5-0 run as Drinnon hit a mid-range jumper and Barnes converted a three-point play to give the team its first lead at 22-21.  East took the lead right back with a mid-range jumper from Chandler Lawson and a three from Merriweather.  U-School answered that with seven consecutive points from Vernon Carey to lead by three at 26-29 with just over three minutes to play in the half.  McCallum put back a miss for East but Swinton Acosta answered for U-School.  Lawson hit two free throws for East put a pair of free throws by Drinnon kept U-School in front by three.  With time running down, Merriweather of East got the ball in the corner and launched a three.  It hit nothing but net and at the half its all tied at 33.

A pair of baskets by Barnes of U-School gave them a four-point lead to start the third but it didn’t take long for East to tie the game at 37.  That would simply be the start of the slugfest that would be most of the third quarter.  For every punch that U-School connected with, East responded with a haymaker of their own.  With 2:13 left in the quarter, Lomax of East hit two free throws to tie the game at 51.  That would be the last points East would score in the period as U-School finished with an 8-0 run.  Swinton Acosta hit a floater in the lane, Drinnon coverted a three-point play as well as a mid-range jumper and Doomes hit one of two free throws to make the score 59-51 heading into the fourth quarter.

Lomax scored for East to open the fourth.  However, U-School had an answer for every salvo East fired.  Things would get interesting with under a minute to go as Lomax hit a mid-range jumper to draw within three at 70-67.  After a U-School miss at the line, Memphis looked to tie with a three but it was off.  Carey grabbed the rebound and was fouled.  When he hit two free throws to make it a five-point game with 27 seconds to play, it was all but over.  U-School would win the first City of Palms by a Florida team not named Montverde Academy or Miami Senior since 1990 in a thriller by the score of 77-72.

U-School got big performances from its “Big Four” as Carey had 20 points, Doomes had 17, and both Barnes and Drinnon had 15 points.