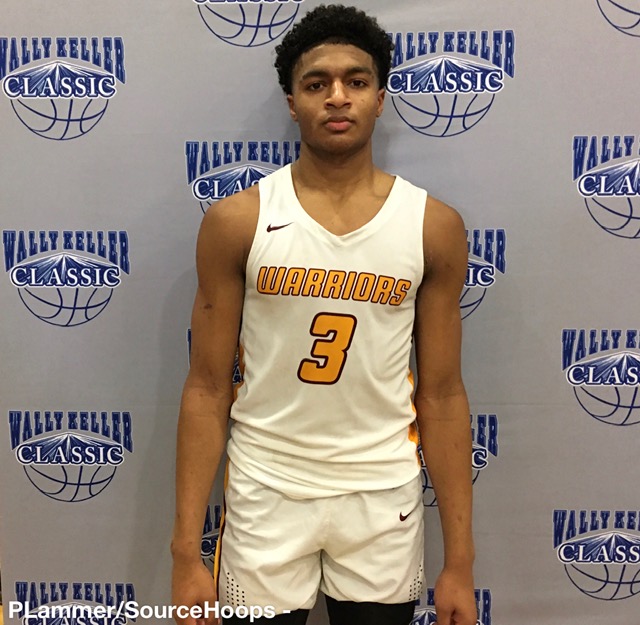 This contest featured two of the better juniors in the state in Riverdale’s 6’9 Tyrone Baker and 6’5 Dallan Coleman of West Nassau.  West Nassau led the entire first half but Riverdale was still in the game at the break, down just seven at 33-26.  The third period was all West Nassau as they outscored the Raiders 19-7 and cruised to a 67-46 win.

Tyrone Baker, Fort Myers Riverdale: His length and leap remind us a lot of Kai Jones, now at Texas.  What grabbed our attention was his high level of skill out on the perimeter.  Baker hit a pair of threes with confidence and good form.  He also proved to be a willing and capable passer from both the post and the perimeter.  Baker is swift up the floor in transition, excels at protecting the rim, and rebounds out of his area.  He is certainly a prospect that should see his recruiting grow exponentially this coming spring and summer.

Dallan Coleman, Callahan West Nassau: It was a tale of two halves for Coleman, considered a top 25-50 player nationally in the 2021 Class.  In the first half, Coleman pretty much limited himself to catch-and-shoot threes, seemingly “settling” for most of them.  While he did go 4-8 in that run, he certainly didn’t play like a high-major recruit.  He turned things completely around in the second half as he showed more aggression and an all-around game.  Coleman got downhill to the basket and finished thru contact, showed better shot selection and made an impact on the defensive end with good instincts and anticipation.  Strong and confident on both sides of the floor, when he plays as he did in the second half, Coleman makes a big and positive impact for his team.

Justin Hicks, Callahan West Nassau: Named MVP of the game for West Nassau (Coleman was named MVP of their game Friday night), the 6’3 junior proved to be a perfect complement to Coleman and worthy of the collegiate looks that he is getting.  He is quick and strong with the ball, fearlessly attacking the rim when seeing an opportunity.  Hicks showed a penchant for making shots both off the dribble and the catch on either side of the three point line.  A good athlete, Hicks has a nose for the ball and shows a lot of potential on the defensive end.

An anticipated battle of big men fizzled out as the South Miami guard duo of 5’10 junior Arturo Dean and 6’3 senior Nic Louis Jacques took over early and led South Miami to a comfortable 64-45 win.  Brandon Sanders, a 6’9 senior, was tasked with defending UCF signee 6’9 Jamille Reynolds.  The latter easily won the statistical battle (14 points, 6 rebounds, & 5 blocks) to the former’s 4 points, 2 rebounds and 1 block.  However, it was clear that Sanders’ mere presence at the defensive end made it difficult for Lakewood to score.  When Lakewood made their runs in the game, it usually came with Sanders on the bench.

Jamille Reynolds, St. Petersburg Lakewood: How good Reynolds becomes for UCF (and beyond) is all up to him.  He is a great combination of size, strength, and run/jump athleticism.  Reynolds has shown that he can post up and score, rebound in a crowd, and force offenses to change their plans to attack the basket.  That being said, he is still more potential than polished product at this stage of his development.  If Reynolds accepts the challenge of improving himself by matching the play of bigger and more physical players at the next level, he could get a paycheck for playing this game in the future.

Arturo Dean, South Miami: Dean is a dangerous guard with speed, handles, the creativity to get to the basket and score but is also a solid shooter from beyond the arc.  An offensive spark plug, Dean pushes the pace and puts pressure on the defense.  With quick hands and feet on defense, Dean is a ball hawk with the ability to swipe it from the dribbler as easily as jumping the passing lanes and disappearing to the other end for a score.

Nic Louis Jacques, South Miami: Jacques doesn’t just have a pretty jump shot; he has a SI Swimsuit/Victoria’s Secret Super Model jumper.  Great form, release, and rotation, make the shot appear that it is going in every time.  He was 6-11 on perimeter shots on Saturday.  Jacques has vastly improved his ability to score off the dribble both from mid-range and at the basket.  He’s a good athlete and showed solid defensive potential.

This game was originally scheduled to be Tampa Catholic vs. Stranahan, but Stranahan had to back out after over-scheduling.  Fortunately, Naples could fill in.  This was a fun and entertaining contest to watch.  Leading by just two after one quarter of play, TC opened up a thirteen point lead at the break.  To their credit, a much smaller Naples squad never quit, and their unique style of up-tempo basketball got them to a final score of respectability.  How many times does a high school team score 102 points in regulation but only win by nine?

Johnni Broome, Tampa Catholic: The 6’9 senior and Morehead State signee put in a dominating performance with 34 points and 13 rebounds and was simply too much for Naples to contain.  As usual, he showed off solid post moves and a soft touch around the basket.  Broome dominated his rebounding area on both sides of the floor.  He is more of a shot challenger/changer than shot blocker as he doesn’t have a lot of bounce off the floor but Broome is a solid athlete with good strength.

Tony Green, Naples: The 6’6 junior had a coming-out party at the Wally Keller this weekend.  A skilled wing with lots of upside, he showed he is a dangerous shooter off the catch from beyond the arc.  He handles the ball well and is a productive straight-line driver to the basket.  A “grab-and-go” rebounder, Green has long arms, is a good athlete, and has a lot of potential to be a multi-position defender.

Byntley Theork, Naples: The 5’10 junior didn’t start for Naples but got starter’s minutes and proved to be a very important piece to the team’s success.  He has a stocky build, but is strong and speedy with the ball.  A streaky shooter from deep, Theork makes just enough shots from distance that the defense must respect him.  He does a good job of pushing the pace and putting pressure on the defense to get back and defend the lane.

This was the best game of the day in the main gym and it wouldn’t surprise if these two teams met again in Lakeland.  It was a contrast of styles as Seminole relies on its defense to pressure opponents into turnovers and get easy shots.  Lakewood Ranch will run when the opportunity is there but is arguably more effective when they can execute in the half-court.  Lakewood Ranch led at the end of the first and second quarters but Seminole led by four after three.  Tied at fifty at the end of regulation, Seminole won the OT period 13-6.  O’Shea Baker, a 5’10 senior, scored 17 points and was named MVP for Seminole while 6’6 senior and Rollins College commit Christian Shaneyfelt earned that honor for Lakewood Ranch, scoring 16 points despite going down not once but twice with what looked like a knee injury.  Hopefully, he will make it back soon.