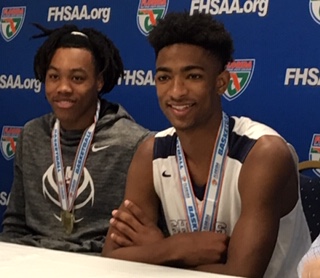 Davie University School senior forward Jace Howard committed to play for his father, Juwan Howard, and the University of Michigan on Monday.

The 6-foot-7 forward is ranked among the top 200 prospects in the 2020 class, according to the 247Sports composite index.

“Everything about Michigan felt right to me from the players, coaching staff, to the school itself,” Jace Howard (pictured, right) told me. “It was ultimately down to Michigan and Brown, [an Ivy League school in Rhode Island]. Both schools I feel like I really could’ve played at and I built a strong relationship with Brown’s head coach Mike Martin.”

Michigan’s 2020 recruiting class is ranked in the top 5 in the nation and No. 1 in the Big Ten.

Howard started his high school career at Miami Gulliver Prep. He helped lead University School to an FHSAA Class 5A state championship and a berth at GEICO Nationals last year as a junior. This season, the Sharks sit at 13-5 as they shoot for a third consecutive state championship. 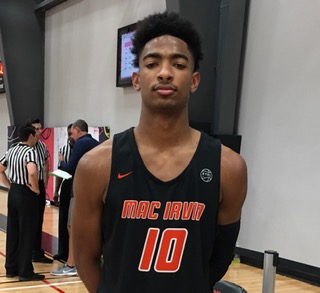 “I was his dad’s point guard back in high school,” Irvin said. “I played one year with Juwan in high school [at Chicago Vocational School]. He was close with our family. He is like a brother to us.”

Howard brings a lot to the table. He plays the game the right way, he brings energy and he can defend almost every position on the floor.

The Wolverines, and dad, can benefit greatly from those attributes.