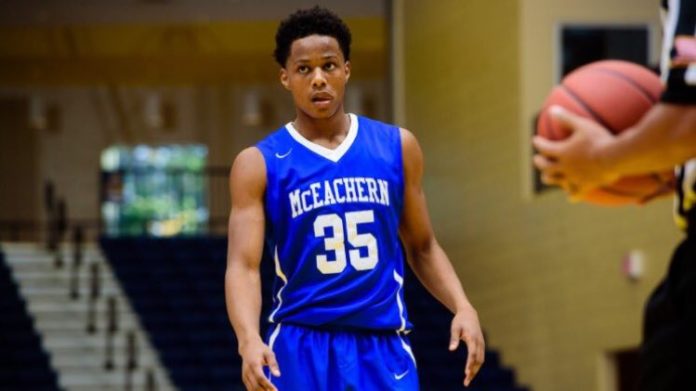 Both teams were impressive on Friday despite losing in the semis.  Simeon is old-school, big city tough and has a lot of interchangeable parts.  McEachern is on the rise and despite being loaded with underclassmen, were one of the favorites to make the final heading into the tournament.

Shariffe Cooper got McEachern on the board first with a three.  Simeon got one of two free throws from Kejuan Clemmons then another three from Cooper gave McEachern an early 6-1 lead.  After two free throws from Messiah Jones of Simeon, Isaac Okaro went to work for McEachern.  He outscored Simeon 8-2 over a three-minute span to give them a 14-5 lead with under three minutes to play in the first.  Simeon responded with a pair of baskets from Jalen Horton Tucker sandwiched around a transition basket from Xavier Pinson.  Simeon was now back within three at 14-11.  However, McEachern would close out the first with a 6-2 spurt, making the score 20-13 heading into the second quarter.

McEachern stretched their lead to double digits early in the period.  Simeon got back to within nine but then Cooper hit a three to make it 20-18.  A three-point play from Simeon’s Clements and a floater from Pinson got them back to within seven but Okoro answered with a three for McEachern.  After an exchange of baskets, Simeon closed out the half with a three from Horton Tucker and a steal and score from Pinson made it a five-point margin at the half, 35-30 in favor of McEachern.

A three from Okoro opened up the scoring in the third.  Simeon answered with a lob for two and then a three from Horton Tucker to get within three at 38-35.  McEachern held them off with a pair of baskets to get back up by seven.  Horton Tucker again came through for Simeon with a pair of free throws and then a driving layup.  A three from McEachern’s Devin Gordon stretched their lead to 45-39 with 1:25 left in the quarter.  Simeon could only manage three free throws the rest of the quarter as McEachern hit some free throws of their own to extend their margin to eight at 50-42 with one quarter left to play.

Simeon opened the fourth quarter with a 6-0 run as Tucker Horton hit a free throw and then had a steal and score.  Jones put back a miss and Pinson made one of two free throws to get within two at 50-48 with just over five minutes to play.  McEachern’s Cooper scored the next three points get their lead back to five.  Simeon continued to make it interesting with two free throws from Jones and a bucket inside by Tucker Horton to draw within one at 53-52 with just over two minutes to play.  Okoro hit two free throws for McEachern as Simeon had to foul to get the ball back.  Jones put back a miss for Simeon to get back within one at 55-54.  McEachern’s Devin Gordon was fouled with sixteen seconds left to make it a two-point ball game.  Simeon drove the to basket but the ball went out of bounds off McEachern with three seconds left.  After a couple of timeouts, Simeon finally got the ball inbounds but a drive to the basket fell short and McEachern earns the third place title at the COP with a 56-54 win.

McEachern was led by Isaac Okoro with 22 points while Sharife Cooper contributed 19 points.