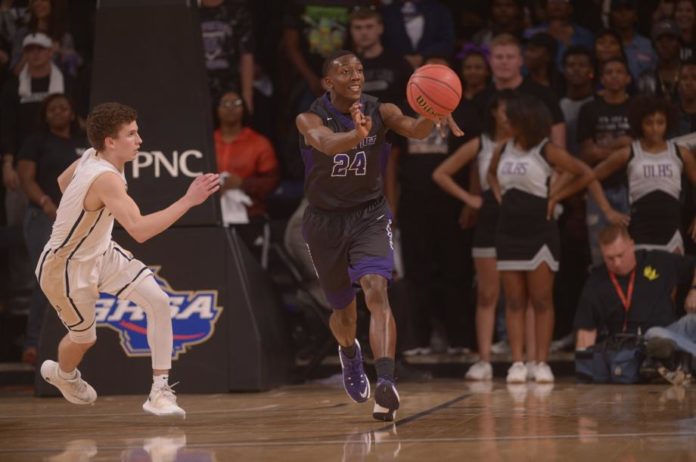 Two small school powers from southern states matched up in the Signature Series final.  While neither team has a nationally known player, they both are championship caliber teams.

Lee got on the board first with a transition basket from Jacorey Smith.  A three from Chandler Stewart got Corbiin on the board and was a foreshadowing of things to come.  Lee’s Zyrice Scott hit a three which was answered by Matthew Taylor of Corbin.  A three point play by Smith of Lee made the score 8-6 in favor of Upson.  Corbin then went on a 11-0 run, knocking down a trio of threes in the process to give Corbin a 17-8 advantage.  Tavias Fagan hit a three for Lee to break the drought.  Chandler Stewart scored on a drive for Corbin on the next possession.  Fagan hit one of two free throws to close at the first quarter to make it 19-12 heading into the second quarter.

Fagan put back a miss to get Lee on the scoreboard first in the second.  Alex Byrley put back a miss to answer for Corbin.  Lee then went on a 6-0 run to draw within one at 21-20.  Corbin answered with a free throw and then another three.  Lee answered with a three of their own to make it 25-23 with just over four minutes to play in the half.  A three from Corbin’s Andrew Taylor pushed the margin to five.  Lee answered with a putback but Corbin scored again.  Lee drew closer with a basket inside from Fagan but two free throws from Chase Sanders and a three from Stewart put the lead back to double digits at 38-27.  Lee scored inside but a late three by Corbin ended the half at 41-29 in favor of the Redhounds out of Kentucky.

Fagan of Lee scored to open the third period and after a putback by Travon Walker, Lee had the deficit below double digits.  Corbin answered with a long two from Matthew Taylor and after a bucket inside by Fagan, Corbin scored five straight points to go up thirteen at 48-35 with just over four minutes left in the quarter.  Lee scored four straight to get within nine but three free throws from Chase Sanders only increased the lead.  After and exchange of threes, Fagan of Lee converted a three point play to make the score 54-45 in favor of Corbin.  The Redhounds closed out the quarter with four unanswered points and led by thirteen going into the fourth quarter, 58-45.

A long two by Taylor of Corbin gave them a fifteen point lead a few seconds into the period.  At that point, Lee erupted.  They scored fourteen unanswered points to draw within one at 60-59 with 5:27 to play, forcing a Corbin time out.  Corbin’s Taylor scored out of the time out but that was answered by a Fagan mid-range jumper.  It looked like Corbin had regained control after connecting on three of four free throws to make the score 65-61 with four minutes to play.  A three from Scott of Lee brought them within two and then after a free throw from Corbin, Fagan tied the game at 66.  Lee took its first lead since early in the first quarter after a three from Fagan made the score 69-66.  Stewart of Corbin tied the game at 69 with a three of his own.  Walker put back a teammate’s miss for Lee with thirty seconds left but Taylor tied the score at 71 with a drive.  With fourteen seconds left, Lee worked the ball around.  On a drive, Smith found himself open under the hoop and laid the ball up with two seconds left.  Corbin called a time out but turned the ball over and Lee came back from a deep hole to win by a deuce, 73-71.