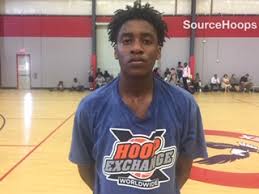 More from the Classes of 21 & 22 edition of the Hoop Exchange Live Invitational.

Bobby Crouch, Jacksonville The Bolles School: The 6’0 senior plays with a chip on his shoulder as he is tough and tenacious at both ends of the floor.  He pushes the pace in transition, is quick to the basket, and makes good decisions on the move.  Crouch also displayed a respectable perimeter shot out to the arc.

Justin Abson, Fort Lauderdale North Broward Prep: The 6’9 junior is a force in the post.  He has some basic but reliable post moves and can score from either block.  While not yet an explosive run/jump athlete, Abson is good enough and gets up and down the floor.  Defensively he is physical, challenges shots and controls his rebounding area.

Arturo Dean, South Miami: The 5’11 senior is extremely fast with the basketball and defenders have little success in staying in front of Dean when he decides to head to the basket.  He can score in a variety of ways as he has an accomplished floater in the lane as well as consistent range past the three-point line.  An active defender with quick feet and hands, he converts a lot of steals into scores.

Jeremy Foumana, Kissimmee Central Point Christian: A recent arrival, the 6’9 junior has a good frame, is strong and athletic, and very active in the lane.  Saturday he scored well on either side of the rim, got out in transition, and chased rebounds out of his area.  Now that he is in the U.S., it should be interesting to see how his recruitment forms and evolves once college coaches get word of his potential and production.

Jordan Johnson, Fort Lauderdale University School: The 6’4 senior was one of the bigger surprises of the day.  We were impressed with his ability to score from all three levels.  Johnson was adamant about pushing the pace and forcing the defense to adapt.  A very athletic guard, he uses his physical gifts well as both a rebounder and on-ball defender.

Ernest Udeh, Orlando Dr. Phillips: Another player that we only got to see during the four vs. four segment, the 6’9 junior continues to improve, especially as a scorer around the basket.  Udeh plays hard, runs the floor, and has the length and quickness to defend out on the perimeter when necessary.  He actively challenges shots in the lane and doesn’t mind playing physically in the post.

Manok Lual, Jacksonville Bishop Snyder: The 6’9 junior is quite thin and very much a perimeter player.  While his shot and ball skills still require sharpening, Lual converts one- and two-dribble drives consistently and will knock down perimeter shots if given time and space.  He is best when running the floor and beating the defense to the basket.  A long defender and rebounder, Lual can be disruptive at that end of the floor.

Jayven Millien, Sarasota Riverview: The 6’7 senior was impressive during the four-on-four session, connecting on open perimeter shots both in front of and behind the arc as well as converting around the basket in traffic.  Millien is long and athletic and is fast up and down the floor in transition.  His best basketball is arguably ahead of him at the collegiate level.