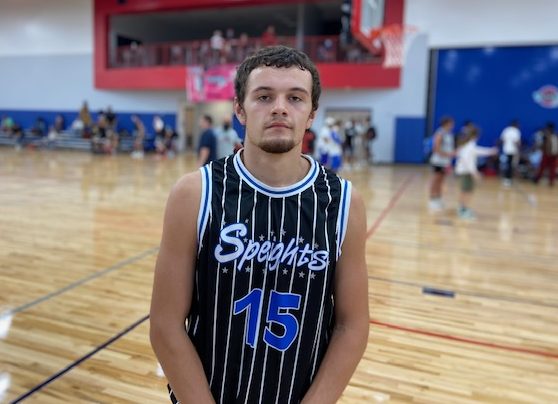 More from this past weekend’s Tampa Live! Event presented by SOH Elite.

Marcus Allen, Miami LAB: The 6’5 freshman is considered one of the better 2024 players in South Florida and didn’t disappoint on Sunday.  Allen already has a good combination of size, skills, and athleticism.  He’s quick to get out in transition and finish above the rim.  Allen has a fundamentally sound perimeter shot and while it wasn’t consistent in the game we took in, we can see that it will become more of a weapon as time marches forward.  He combines a lot of upside with an already-productive game.

Clarence Burts, Miami LAB: The 6’3 freshman played a variety of roles for LAB on Sunday.  At times he could be found running the offense as a point guard while at others he was a secondary ball-handler and scorer that made the most of his opportunities.  Burts seemed to hit big shots when the team needed him most and he also put forth a serious effort on the defensive end.  He has good size and the ball-handling/passing skills to be a big point guard down the road.

Edgerrin James, E1T1 2023: A 6’0 sophomore out of Orlando Olympia, we were impressed not only with James’ speed and quickness with the basketball, but also his ability to weave thru traffic and make good decisions on the move.  James is very effective at getting into the lane and scoring in a crowd.  In the future, we hope to see more in the way of perimeter shooting as he didn’t take one in the game we watched.  Defensively he is disruptive as he has active hands, quick feet, and good anticipation when it comes to passes coming his way.

Marvel Allen, E1T1 2023: The 6’4 sophomore from Calvary Christian in Fort Lauderdale personifies toughness when he steps on the court.  He’s arguably the best two-way guard in that class, as he is an aggressive driver and effective scorer while also taking no prisoners on the defensive end.  His perimeter shot continues to improve but he understands that he is most effective when heading to the basket.  Allen is better than expected when it comes to setting up his teammates for scores and has a high basketball IQ.  A varsity player since his eighth grade year, Allen is one of the more well-known recruits in Florida’s 2023 Class.

Khamaury McMillan, SOH Elite 2021: The 6’1 senior out of Miramar was a solid contributor to last season’s state title run.  A very good athlete with speed and quickness, McMillan is disruptive as a penetrator and distributor of the basketball.  He collapses the defense and makes good decisions on the move.  His perimeter shot dropped early on but as the game went on the results weren’t as positive.  Defensively, McMillan makes life difficult for opponents.  He is difficult to get by thanks to his foot speed and effort and tough to pass over or around with his length and active hands.

Dean Gabrelcik, Team Speights 2021: The 6’5 senior out of Tarpon Springs East Lake has had a very good summer and continued his solid play this weekend.  Arguably one of the better shooters in the state, Gabrelcik went 4-5 from behind the arc in the team’s first game of the day.  Not just a catch-and-shoot threat, Gabrelcik can put the ball on the deck and either pull up or get all the way to the rim and finish in traffic.  His recruiting is ramping up and it will be interesting to see his stock rise.

Aubin Gateretse, Miami Hoop School 2021: The 6’9 Belgium import has an interesting backstory as well as game.  Supposedly, he grew up on a rural farm in Belgium, far away from the prying eyes of the basketball world.  He played hoops in his native country and word of mouth spread his reputation.  He’s now at Triple Threat Prep in South Florida, as he has already graduated high school but is the age of a high school senior in America.  On the basketball front, he has good post moves and scoring touch around the basket, rebounds well, is an above-average athlete and shows some promise of being able to take his game out to the perimeter. Definitely a player to watch.

Pat Presendeau, Palm Beach Flames: The 6’4 junior from John I Leonard in Lake Worth was tough to contain in the last game of the day.  His ability to “get downhill” and score at the basket was virtually unstoppable for the opponent.  Presendeau was especially effective in the open floor where his speed gave him an advantage.  We didn’t see much in the way of a jump shot in our limited viewing, but if that aspect of his game comes around, his recruitment will become intriguing to say the least.