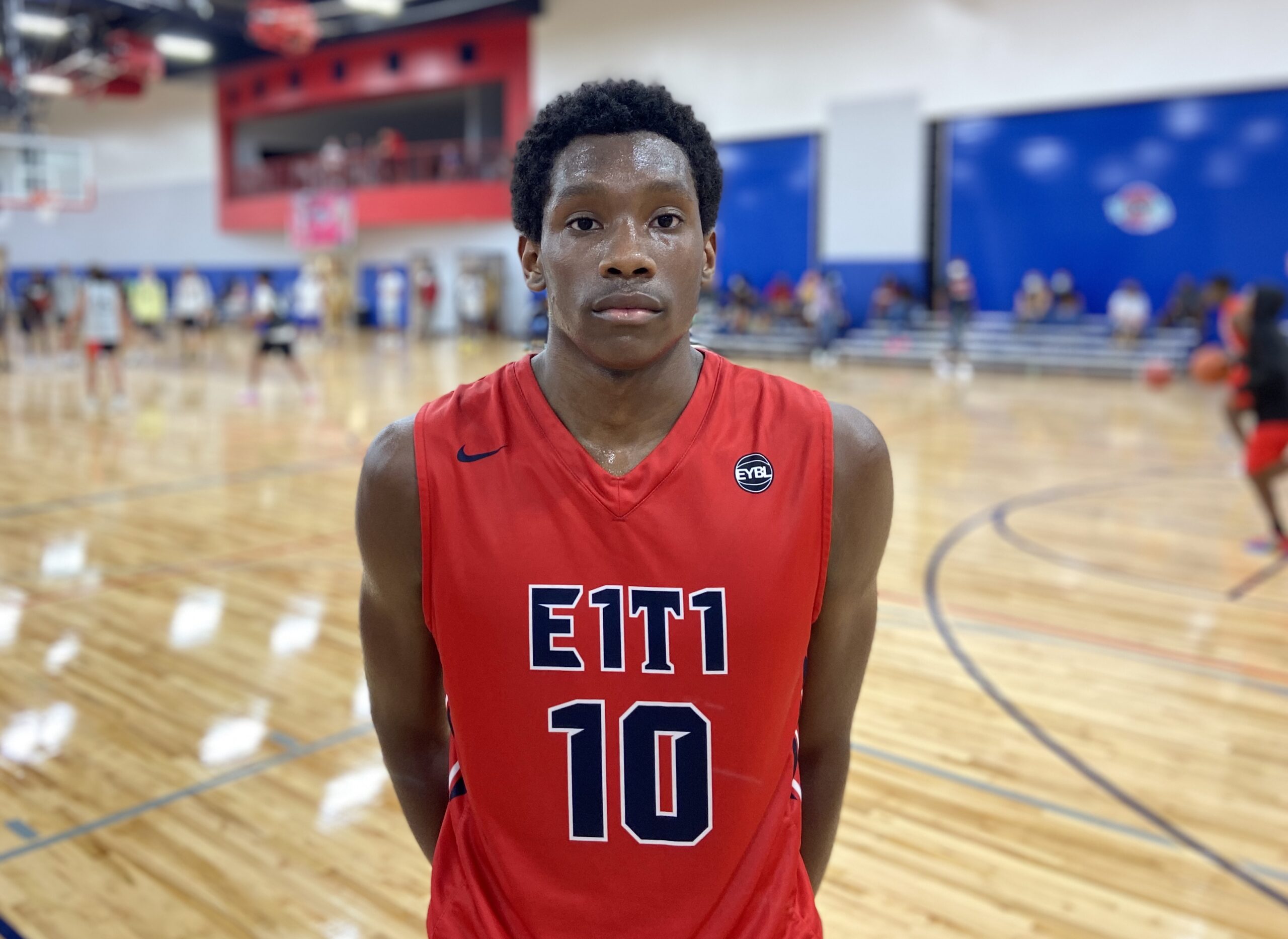 We took in the first day of The Battle for the South event held at The Big House in Tavares.  Before we get into some player evals, we must give props to Team Speights for winning the Platinum bracket under some difficult circumstances.  A one-point loss in pool play placed them third in the pool, forcing the team to play four games on Sunday if they were to claim the title.  They did just that, defeating four quality opponents along the way: a six-point win over Shabazz Elite; a three-point win over Florida Rams; a seven-point victory over E1T1 2022 and, in the final, a 63-61 win over Team Florida, the team that defeated Speights by that one point in pool play.  That is a tough gauntlet to get through, but the Speights crew did it and certainly should be recognized as one of the better teams of the“pandemic-adjusted” summer.

Joe Poyser, CFL Rising Stars: The 6’4 senior from Wildwood may not have put up a lot of points but certainly was productive in a host of other stat sheet categories.  He was active on the boards at both ends, made blocks coming over from the weak side and proved to be a versatile defender.  Poyser is more of an opportunistic scorer at this point, getting most of his points in transition, offensive stick-backs, and cuts to the rim.

Rodney Bryant, Raptors Elite: A 6’0 senior at Mount Dora Christian Academy, Bryant is well-built and is both fast and quick with the basketball.  He connected on several perimeter pull-ups on both sides of the arc and frequently broke down the defense on drives to the basket where he showed an ability to finish in traffic on either side of the rim.  Always looking to push the pace, Bryant was a big part of the Raptors making it to Sunday’s semi-finals.

Osmar Garcia, Shahbaz Elite: The 6’7 sophomore from Miami Riviera Prep was solid in the game we took in on Saturday.  He has a solid body, soft hands, quick feet, and a variety of post moves.  Garcia scored well from fifteen feet and in, alternating high-post drives to the basket, face-up jumpers, and strong moves to the basket from either side of the lane.  A rugged rebounder and physical interior defender, Garcia continues to improve his athleticism, which will make him a more versatile performer at both ends of the floor.

Will Searl, Q6 All-Stars Elite: A 6’2 senior at Orlando Boone, Searl had solid outings in the two games we watched on Saturday.  He is fundamentally sound and seems to see the game one play ahead of everyone else on the floor.  Searl understands how to create openings and take advantage of them, whether it be to drive to the basket and score and knock down shots with range to the arc.  He is “old school” in terms of the way he approaches the game, but Searl definitely fits with the modern-day way basketball is being played in the 21st century.

Lamine Niang, Team Florida: A 6’7 junior out of Central Point Christian Academy in Kissimmee, Niang shows a lot of potential.  Long, athletic and energetic, Niang is active on the boards at both ends of the floor.  He routinely kept offensive rebounds alive until he could grab the ball and get it back into the hoop.  Niang also showed that he can reliably make shots out to fifteen feet.  Granted, there is some skill work to be done as well as getting used to the style of play in the states, but Niang is upside personified.

A.J. Brown, E1T1 2022: We’ve seen the 6’4 junior out of Orlando Christian Prep several times, but this was the first time we noticed a “Mamba Mentality” from him.  Brown was relentless and fearless in leading the team back from a double-digit deficit to a one-point win over Team Florida Saturday afternoon.  Whether he manufactured points with drives to the basket or perimeter jump shots, took advantage of the defense by beating it down the floor in transition, or getting opportunistic points thru offensive rebound baskets, Brown was not to be denied during crunch time.  Rather from the floor or the free throw line, Brown was determined to get points.

Kameron Johnson, Florida Rams: A 6’8 senior at Miami Doral Academy, Johnson has a well-developed body and knows how to use it in the lane.  He has a good touch around the basket and mid-post areas, commands his rebounding area, and is a decent passer out of the post.  Johnson is a solid athlete that runs the floor, challenges opponents around the basket on the defensive end, and does not shy away from the physical aspects of the game.