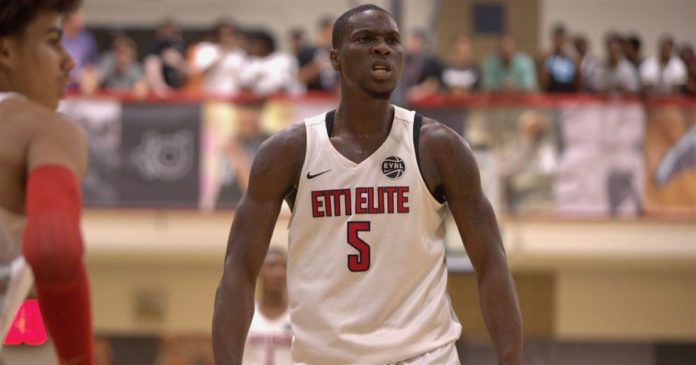 These teams mirror each other.  Both are filled with quality athletes, feature and dynamic big man as well as a strong running mate on the perimeter.  The teams are deep and like to play fast.  This could be the most entertaining game of the day!

Antwaan Jones put back a miss on Oakridge’s first possession.  It then became a game of Emmitt Williams vs. Jaylen Hoard.  Hoard scored six straight points for Wesleyan while Williams scored five consecutive for Oakridge to make it a 7-6 ball game in favor of Oakridge with just under four minutes to play.  A bucket inside from Wesleyan’s Shawn Walker and another from Khyre Thompson gave Weleyan a 10-7 lead.  Both team’s would score two more baskets each before the end of the period to make the score 14-11 in favor of Wesleyan.

Thompson opened the second quarter scoring with a pair of free throws for Weleyan.  Kaleb Coleman of Oakridge scored consecutive baskets for Oakridge to get them within one.  After a bucket inside from Hoard, Damon Harge hit a three for Oakridge to tie the score at 18 with 4:12 left to play in the period.  Wesleyan hit a free throw but Oakridge then took the lead with a putback by Williams.  Oakridge would increase its lead to 24-19 after a pair of vicious slams from Williams.  Wesleyan finally stopped the bleeding with a bucket inside by Keyshaun Langley to make the halftime score 24-21 in favor of Oakrdige.

Rob Perry hit a three to open the second half for Oakridge.  Hoard answered with a free throw for Wesleyan but Oakridge countered with two more threes from Perry along with a pair of transition baskets to jump out to a fifteen point lead at 37-22 with just under five minutes to play in the third.  Wesleyan Christian responded with a run of their own as Hoard hit two free throws, Shawn Walker hit a three as did Keyshaun Langley.  Another bucket by Wesleyan brought Wesleyan within five at 37-32.  Perry hit another three to push the margin back to eight.  Wesleyan hit a pair of free throws while Oakridge hit one to make the score 41-34 with one quarter left to play.

DeAndre Wilkins put back a miss for Wesleyan but a three from Marcus Taylor only increased Oakridge’s lead.  Wesleyan then hit a pair of threes, one by Keyshaun Langley and one by Aaron Wiggins to draw within four at 46-42.  Kaleb Coleman put back an Oakridge miss but Wesleyan kept coming.  A putback by Wiggins and a three from Walker made it a one point game, 48-47 with three minutes to play.  Oakridge responded with a putback dunk from Williams then after a turnover by Wesleyan, Oakridge decided to let some air out of the ball.  Wesleyan was not forced to foul.  Oakridge made the most of their opportunities and while Wesleyan was able to score, they couldn’t make it past Oakridge.  The Pioneers go on to win the game by the score of 56-52.

Emmitt Williams with 21 points as well as 12 rebounds.  Rob Perry added 16 points, all in the second half.