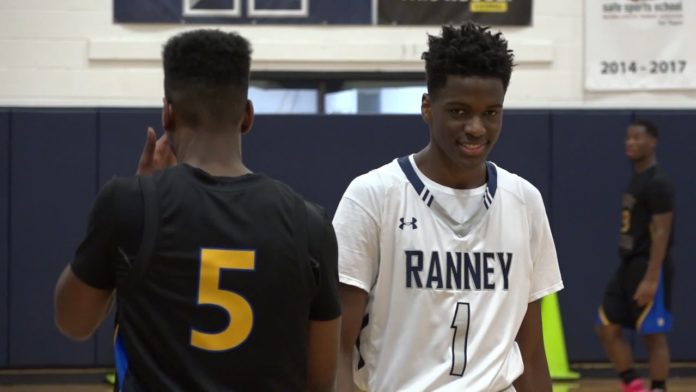 Both teams looked more than solid in their respective wins on Friday.  Mountain Brook shot lights out and if they do that again it will be difficult for Ranney School to keep up. Bryan Antoine and Scottie Lewis of Ranney School will need to be at their best.  This game features three of the top ten Class of 2019 players in the country in Antoine, Lewis, and Mountain Brook’s Trendon Watford.  Both teams have a lot of underclassmen and could return to the CoP in 2018.

Lior Berman scored first for Mountain Brook but Ranney answered with a three from Alex Klatsky and a steal and slam by Bryan Antoine.  After a couple of turnovers by Mountain Brook, Scottie Lewis answered with a drive to make it 7-2 in favor of Ranney.  A three from Britton Johnson of Mountain Brook got them to within two.  However, the “Brook” dried up while Ranney rained on them. A three by Klatsky and another by Antoine gave Ranney a 13-5 lead after one quarter of play.

Mountain Brook finally scored on an offensive put back by Trendon Watford.  Ranney kept coming with a three from Klatsky and five free throws from Antoine to make the score 21-7 in favor of Ranney with just over four minutes left in the half.  Berman scored for Mountain Brook but a pair of threes from Klatsky only increased Ranney’s lead.  Watford finally got Mountain Brook to put together back-to-back buckets to show some life.  Still, Ranney outscored Mountain Brook 5-2 over the last two minutes to lead 32-15 at the half.

In the final period, Lewis of Ranney school scored first.  Sean Elmore of Mountain Brook knocked down a three on their next possession.  Antoine hit a free throw then Elmore and Ben Garrett each hit a three make the score 52-41 with 5:22 to play.  Three free throws by Garrett and another three from Elmore made it a five point ball game at 52-47 and Mountain Brook looked like the team that we saw yesterday.  Antoine hit four free throws to push Ranney’s lead back to nine.  A bit later with the score 58-50, Watford scored six straight points to get Mountain Brook to within two at 58-56 with 1:22 left to play.  Antoine hit two free throws for Ranney to make it a two possession game.  Two things then started to happen, both bad for Ranney.  They turned the ball over and they fouled Mountain Brook, putting them on the line.  With 33 seconds left, Mountain Brook had tied the score at 60.  Antoine hit was fouled streaking to the basket and the officials called it intentional. He hit one of two free throws and Ranney got the ball back.  They turned it over.  Mountain Brook missed a shot but Ranney turned the ball over after the rebound. The ball ended up in Watford’s hands under the basket with two seconds left and he scored.  A quick timeout by Ranney was followed by one by Mountain Brook.  Clearly, Ranney would need help from a higher power to pull this one out.  That must be Bryan Antoine’s nickname, because he caught the ball near mid-court, took one dribble and launched a shot from about forty feet.  It dropped thru the net just as the buzzer sounded.  Ranney wins an incredible game 64-62!

Antoine tallied 36 points for Ranney School.  Klatsky added 21 behind 6-10 shooting from deep and Scottie Lewis added 7.  Those were the only players to score for Ranney.