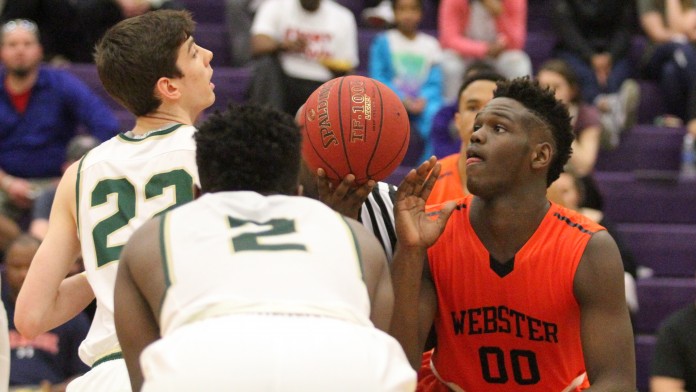 Canterbury, the “local’ representative, kind of expected to be here.  Webster Groves, a top ten team in the pre-season did not.  However, when senior guard Courtney Ramey went down with a wrist injury in the pre-season, it became difficult for Webster Groves to make things happen on either end against the vaunted competition that takes place annually at the COP.

Canterbury tied the score with a Jeanlouis put back but Gordon answered inside for Webster Groves.  A free throw from Fernandez brought Canterbury to within one but a transition basket from Dallas King and a three from Wright extended Webster Groves lead to 37-31.  Canterbury got back to within two after a Jeanlouis score inside and a drive by Cedano.  However that would be the last points of the quarter for Canterbury.  Webster Groves finished off the period with an 8-0 run, highlighted by a driving dunk from Gordon.  With one quarter to play, Webster Groves was up ten at 45-35.

Canterbury quickly got back to within five after a three from Cedeno and a floater from Byson Royal.  Gordon then scored four straight points for Webster Groves to push the margin back to nine at 49-40.  A three from Cedano got Canterbury back on the board but then they suffered another drought as Webster Groves scores seven consecutive points to lead by thirteen, 56-43 with just over two minutes to play.  Canterbury was unable to mount a serious comeback and Webster Groves would go on to win by the score of 60-51.

Canterbury was paced by Berrick Jeanlouis with 20 points while Alan Cedeno contributed 11 points.