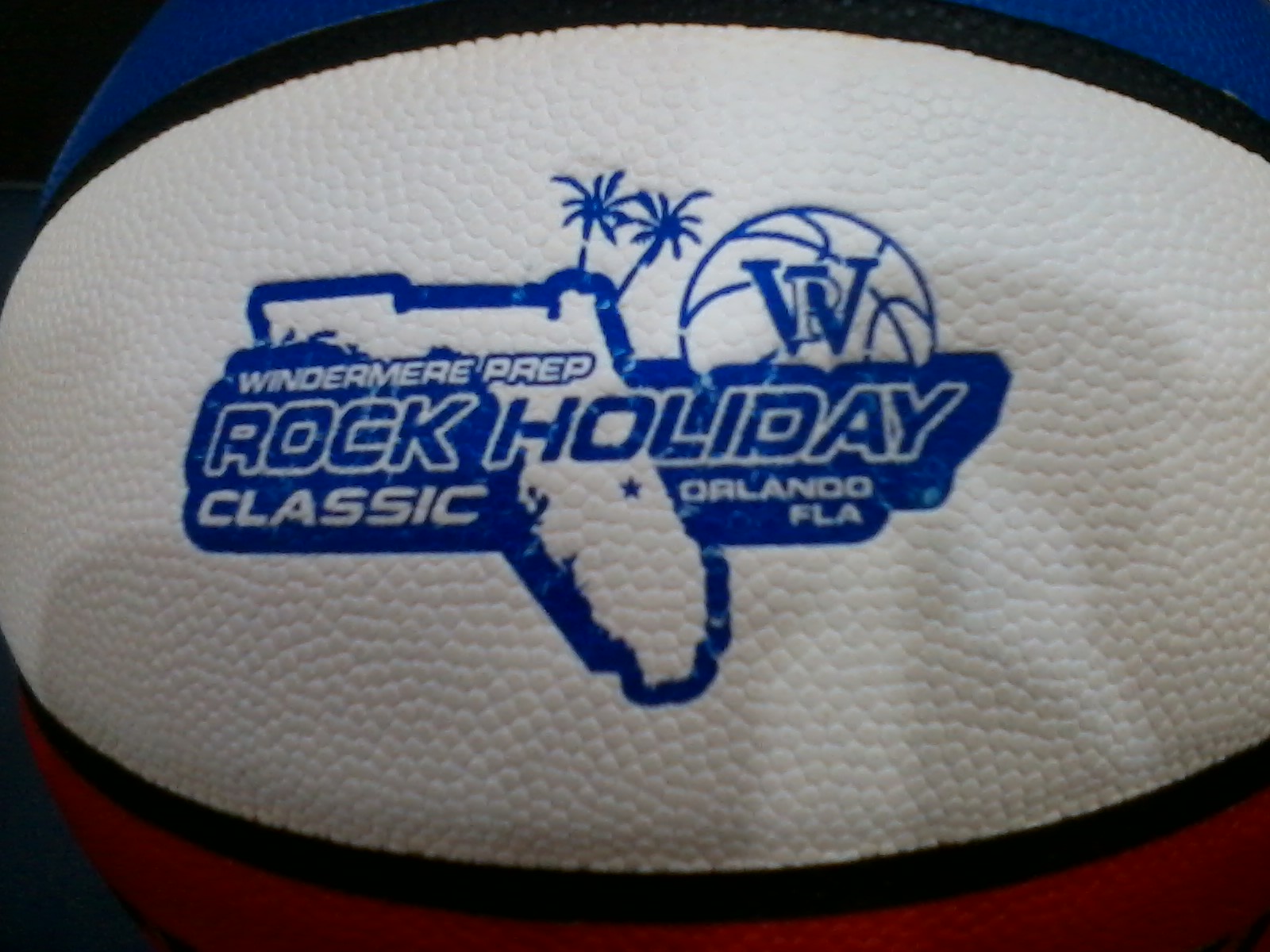 We took in Day One of The Rock Holiday Classic at Windermere Prep today.  Normally a tournament consisting of eight teams, this year’s event was reduced by COVID to a six teams and three days of three showcase games per day.  Before we get into game action, we must give props to The Rock basketball for providing retro-ABA red,white,and blue basketballs for the event.  Now we just need appearances by Dr. J, Special K, and the A-Train to give us those groovy, feel-good 1970s vibes!

The Trojans of Evans have been one of the more pleasant surprises of the season, posting an 8-3 record coming into the contest.  Berkeley Prep was undefeated at 9-0.  Evans got out of the gate quickly and led 10-7 after the first four minutes of play.  At that point, the Trojans went on an 11-3 run, upping their margin to eleven at 21-10, forcing a BP timeout with one minute left in the period.  Trailing 21-12 heading into the second quarter, Berkeley started to find its rhythm.  They chopped the deficit to seven midway thru the period and were down only five, 28-23, at the half.

A 6-0 run by Berkeley Prep to start the third quarter gave the Buccaneers their first lead, 29-28, with just over five minutes left in the period, forcing an Evans timeout.  The magic words must have been spoken, because the Trojans regained the lead and led by four, 33-29, with 2:30 to go.  Berkeley Prep got to within one, 35-34, heading into the final period of play.  In that final period, the score was tied at 37-37 with 6:47 to play when Evans went on a 7-0 spurt over the next two minutes to lead 44-37.  That was enough to hold Berkeley Prep at bay for the remainder of the contest.  Evans would ultimately win by nine, 53-44.

Mt. Pisgah is near Alpharetta, north of Atlanta, and came in with a record of 7-2 while Providence had seven wins versus just one loss.  The first quarter was a slow-paced affair as neither offense could get into gear.  Mount Pisgah led just 7-5 after one period of play.  Providence grabbed a four-point lead with under two minutes to play but Pisgah tied the contest just before the half-time horn to make the score 16-16.

Mt. Pisgah jumped ahead by six quickly at the start of the third quarter and midway thru that period were up 24-18.  Providence wasn’t able to mount much offense, scoring just six total points in the quarter and found themselves down nine, 31-22, with eight minutes of game action left.  Pisgah got their advantage to double-digits with just under five minutes to play at 35-25, and Providence was forced to call a timeout.  Providence got to within five at 37-32 with just under two minutes to play, but could not draw any closer.  Mt. Pisgah was able to run clock and extend their lead from the free throw line to take a 43-36 victory.

For Providence, only 6’9 senior and Furman signee James Repass could get into double-figures and he finished with 12 points.

Christ Church brought a 7-0 record to Central Florida while Windermere Prep came in at 5-3, having played a very challenging early schedule.  Christ Church led just 7-5 midway thru the first period but closed out the quarter with a 9-5 run to lead 16-10.  The second quarter remained a close contest but Windermere Prep could never get over the hump to take a lead.  At the break, Christ Church still had a six-point advantage, 25-19.

Both teams looked a bit stuck in the mud in the third period.  That six-point lead continued to hold for Christ Church at the four minute mark, 31-25.  At that point, Windermere Prep got unstuck, putting together an 8-2 run, highlighted by a Jayden Williams three to beat the period-ending horn to tie the score at 33-33.  The final period continued to be tight and with 13.5 seconds to play, Christ Church had a 42-40 lead and Windermere Prep had the ball coming out of a timeout.  The play worked to perfection, with 6’11 senior Elijah Hulsewe converting a layup before the horn to send the game into overtime.

Christ Church scored first in the OT period.  With twenty seconds left, Williams connected on a three to give Windermere Prep a rare lead at 45-44.  However, it didn’t last long.  Christ Church converted a three-point play with eleven seconds left to go up by two.  Out of time-outs, Windermere had enough time to get a good look, but the Lakers three-point attempt to win was off-line and Christ Church held on to a 47-45 victory.