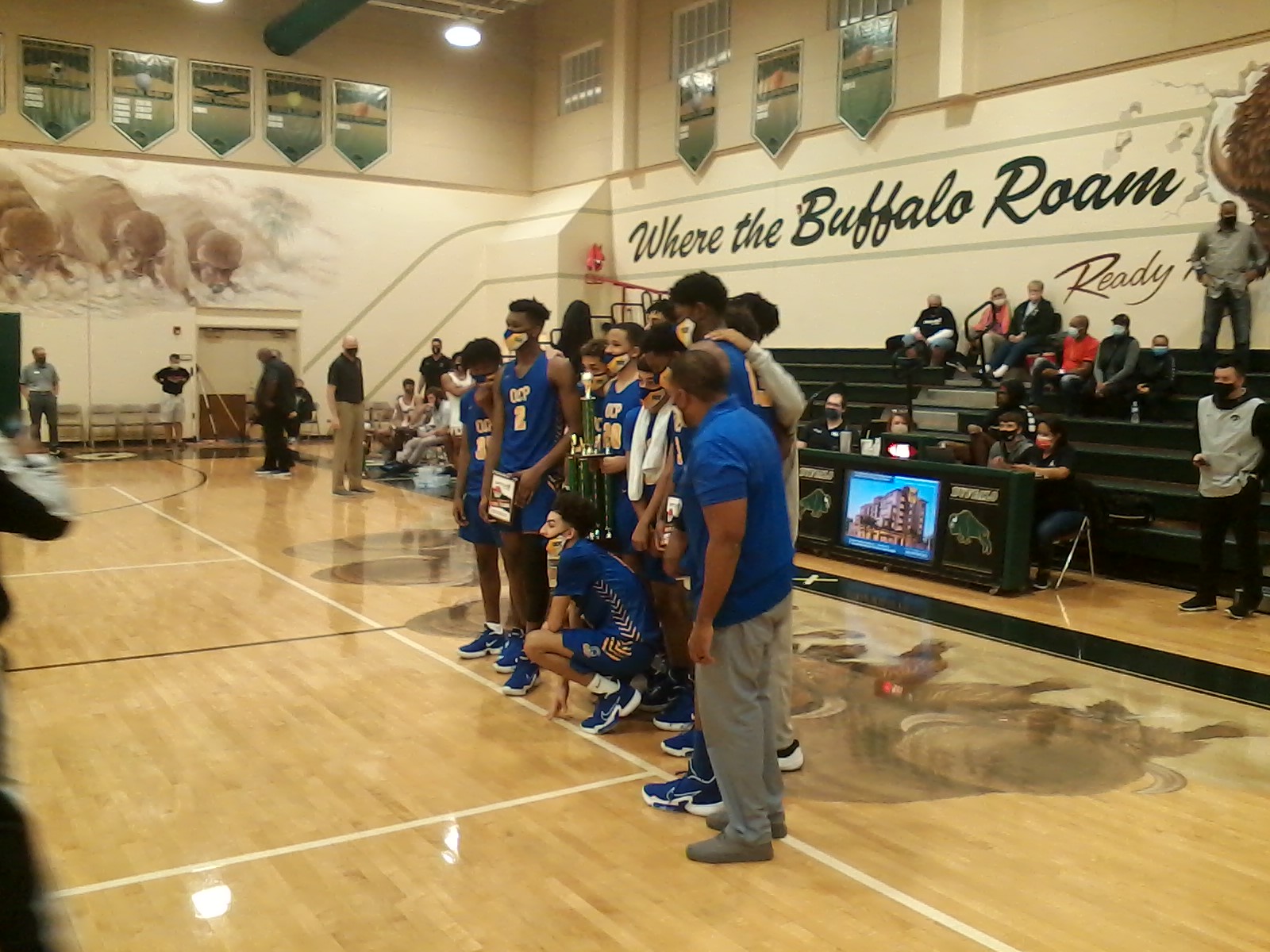 We headed up Florida’s Turnpike to take in the final day at The Battle at the Villages.  Before getting into the games, we MUST give a major props to the tournament committee for adjusting on the fly as COVID took its toll on the original field.  Six of the original seven “invited” teams had to drop in the last month (two in the past week) due to COVID-related issues.  The organizers were able to put together a more-than-respectable event, getting some high-quality teams and individual talent on short notice.

The Villages came in short-handed, with senior starters Nasir Mann and Anthony Rizzo out with injuries.  The Buffalo certainly didn’t expect to be in this game.  Gaither was one of the teams that “came to the rescue” to fill out the bracket at the last minute.

In a bit of a surprise, Gaither got out of the gate very quickly, scoring  the first five points of the contest on its way to leading 9-4 after four minutes to play.  From there, things went downhill fast for The Villages, as Gaither forced turnovers and converted steals into scores.  After one quarter of play, the Cowboys of Gaither were in complete control and led by a score of 18-7.  Things changed quickly in the second period for the host team.  Derek McCray, a 6’0 senior came off the bench locked and loaded.  He drilled a pair of threes and that gave The Villages an offensive rhythm.   In less than two minutes, the Buffalo had drawn to within four at 21-17.  Gaither righted the ship and led 29-22 with four minutes left in the half.  The Villages responded as McCray continued to knock down deep threes.  After a disastrous first quarter, The Villages fought all the way to tie the game at 36-36 at the break.

The Villages opened the third quarter with a 7-2 run to lead 43-38 before two minutes had passed.  Gaither gathered itself together and got back to within one at 46-45 midway thru the period.  The back-and-forth continued for the remainder of the third and when it was over Gaither held a 52-51 lead.  Gaither grabbed the lead rather quickly in the final period, outscoring the Buffalo 7-3 to lead 60-55 with four minutes remaining.  They lead by seven with one minute to play at 64-57, but The Villages unleashed a press and made things interesting.  A couple of steals and scores got The Villages to within three, 66-63, with twenty seconds remaining.  The Villages got possession for a game-tying shot but couldn’t get it off in time.  Gaither headed home to Tampa with a 66-63 win.

Gaither was paced by 6’2 senior Kiael Kelly with 17 points.  He was named to the all-tournament team.  Jordan Oladokan, a 6’1 senior, added 15 points while 6’3 freshman Marc Fransburg contributed 11 points.

For The Villages, McCray finished with 15 points, all in the second quarter.  Quin Kennedy, a 5’6 freshman, added 11 points while 5’11 freshman Von Issac scored 10 points and made the all-tourney team.

A pair of teams from North Florida hooked up in the Consolation Championship.  Both teams played well at the start and the first quarter featured several lead changes.  After eight minutes of play, Columbia held a 15-12 advantage.  The second quarter slowed down considerably as both teams’ defenses stiffened.  Columbia was able to maintain its advantage and went into the break up five at 25-20.

Columbia opened up a ten-point lead midway thru the third at 32-22.  West Nassau called a timeout and responded with a 6-0 run to get within four with a minute left in the third.  Columbia would lead by three at 36-33 going into the final period.  In the fourth, both teams changed defensive strategy.  Columbia threw a Diamond-and-One at 6’5 senior and Georgia Tech signee Dallan Coleman while Nassau extended to a full court press.  Both teams handled the new wrinkle and Columbia kept its three point lead until forty-five seconds remained in the game.  Behind 54-51, Coleman connected on a pair of free throws to draw within one.  West Nassau had to foul to get the ball back, and Columbia missed the front-end of the one and one.  West Nassau had a chance to win, but turned the ball over with one second left.  They fouled Columbia before any time ticked off.  Columbia hit the first free throw but intentionally missed the second. Surprisingly, West Nassau was granted a timeout with 0.7 seconds left.  A  play drawn up, but West Nassau couldn’t complete the comeback.  Columbia held on for a 55-53 win.

Columbia was led by 6’4 senior Charleston Ponds with 25 points.  He was named to the all-tournament team.

Coleman was also named to the all-tourney team and scored 24 points in the game.  Simeon Womack, a 6’2 senior, contributed 16 points, 12 in the final quarter, for West Nassau.

A pair of schools situated twenty minutes apart in Duval County matched up in the third-place game.  Impact built an early five-point lead but Paxon was able to cut that to one point, 15-14, going into the second quarter.  At the five-minute mark of the second period, the score was tied at 19-19.  That’s when Paxon started to find the range on their perimeter shots against a taller Impact team.  Paxon finished the quarter on a 15-5 run to lead by ten at the break, 34-24.

Impact stayed within that margin for much of the third quarter.  With 3:30 left in the third, Paxon’s lead was eleven at 41-30.  That’s when Paxon connected on back-to-back threes, upping their margin to seventeen at 47-40 with three minutes left in the quarter.  The score would be 56-37 heading into the final period.  Paxon had a seventeen-point margin with four minutes to play and spread the floor to run some clock.  It almost backfired.  Impact converted some turnovers into scores and got to within ten with just over one minute to play.  However, not enough time was left and Paxon won “The Battle of Duval” by the score of 68-55.

Another “backyard brawl” held at The Battle at the Villages, this one featuring two of Central Florida’s top private school powers.  Lake Highland Prep hit a three on the opening possession of the contest.  OCP responded by peeling off thirteen straight points to build a ten-point lead with three minutes left in the opening period, forcing a time out.  It didn’t help as the margin stood at ten, 17-7, at the start of the second quarter.  OCP held Lake Highland to just two points in the first four minutes of the period while scoring nine points of their own.  By halftime, OCP had added another ten points to their advantage to lead by twenty, 32-12, at the break.

Halftime was of no help to Lake Highland as OCP continued to be suffocating on the defensive end.  By the end of the third quarter, OCP led 49-22 and there was a real concern a running clock might kick in in the final period. Fortunately, that didn’t happen but Lake Highland never really threatened to significantly close the gap.  The Warriors of OCP won in dominating fashion, 64-34.

For Lake Highland Prep, 5’10 junior Jared Berry led the way with 13 points.  He was named to the all-tourney team as was teammate 6’7 senior Miles Stewart.