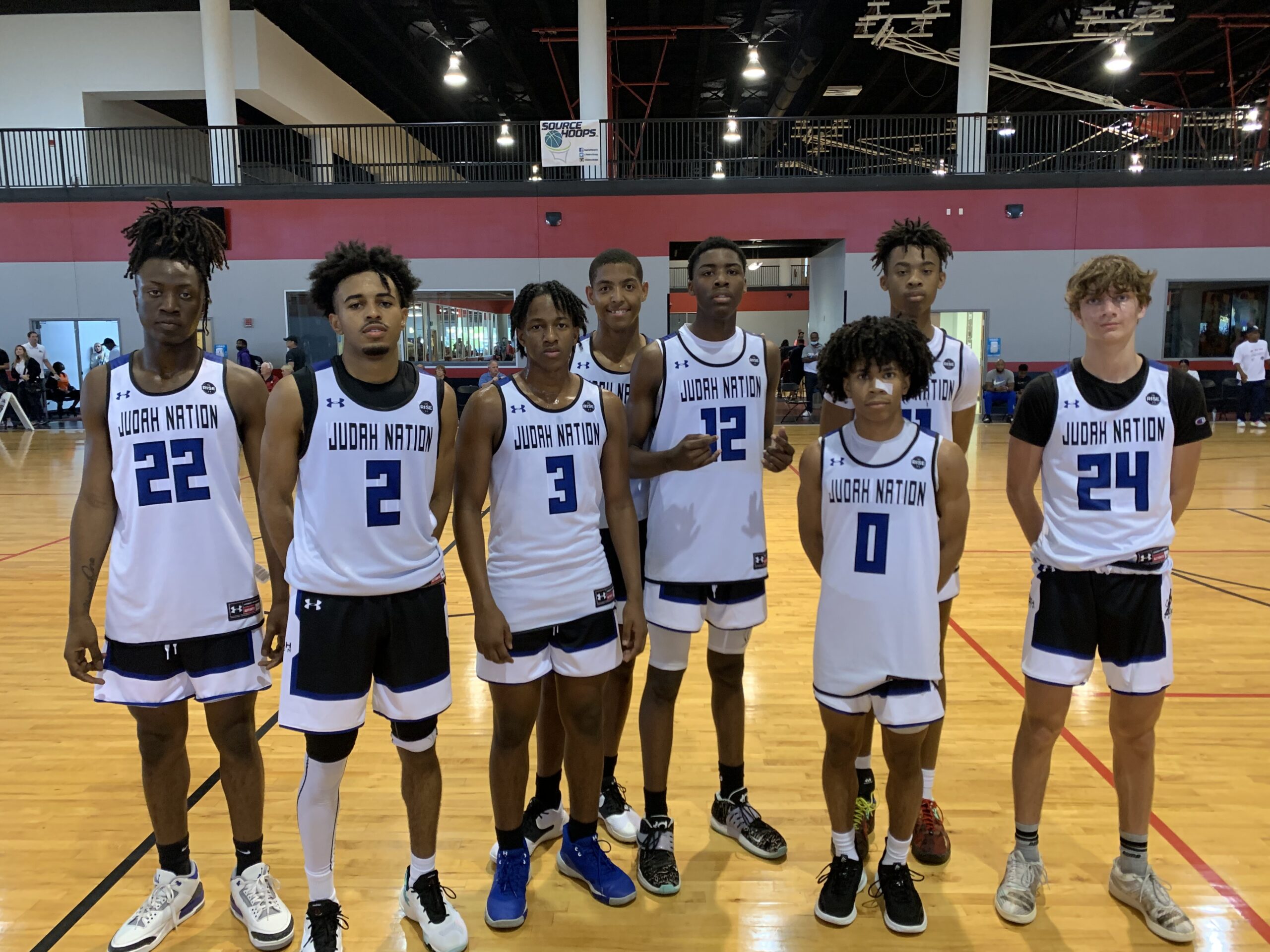 Let’s check in on some of the higher profile 16U teams that took part in the Travel Team Jamboree.

This EYBL group may not have much in the way of size inside but has a ton of speed, quickness, and athleticism.  Karter Knox, a 6’5 wing out of Tampa Catholic, has multiple scoring tools at his disposal. He knocks down threes, is quick to run the floor and finish in transition, and can put the ball on the deck, get to the hoop and score in a crowd.  Marcus Allen, a 6’6 wing from Miami Norland, is much the same.  He scores best inside the arc, pulling up for mid-range jumpers or getting all the way into the paint.  He is quite active when it comes to putting back teammates’ missed shots and is a solid defender.  Issac Celiscar, a 6’6 wing from Winter Haven, plays hard every possession, has the ability to facilitate, is a grab and go rebounder, and makes a bunch of plays on both ends of the court.  Tyler Johnson, a 6’5 forward out of Orlando Oak Ridge, may be the closest thing this group has to a “big”.  He plays bigger than his size with his length and athletic ability, grabbing rebounds among bigger players, sprinting the floor, and scoring from eighteen feet and in.  Daniel McGregor, a 6’0 point guard from Clearwater Calvary Christian, is not only a dynamic ball-handler and distributor but a floor general that pushes the pace, makes good decisions with the ball on the move and has an accurate perimeter shot.  Jaimie Phillips, a 6’4 man without a position, has a high basketball IQ, the skills to play the perimeter, the physique to play inside, and knows how to take advantage of a mismatch.  Elijah Elliott, a 6’4 guard from Orlando Oak Ridge, is a combo guard that is most effective in the open floor when he can slash to the basket.  His length and activity make him a good on-ball defender.  Julien Clark, 6’1, and Kellan Lewis, 6’0, both from Orlando Lake Highland Prep, are versatile players in the backcourt, capable of scoring or distributing as well as giving max effort on the defensive end.

This group is primarily out of the central part of the state and plays as an independent, but a very talented one.  Lorenzo Cason, a 6’1 guard from Lakeland Victory Christian, was one of the better scorers in the state this past high school season.  He scores from all three levels and makes it look easy.  Isaiah Brown, a 6’3 guard from Orlando Christian Prep, has a solid stroke to the arc, some wiggle to his dribble in getting by defenders to score at the basket, and the ability to be disruptive on the defensive end.  Kameron Wright, a 6’4 wing from Gainesville The Rock School, is a high-flying athlete that makes a lot of “WOW” plays in transition but also has a reliable three-point shot and a knack for putting back offensive rebounds.  Jesse Nimmo, a 6’5 wing from Haines City, stretches the defense with his perimeter shot but will burn defenders that play too close or close out improperly with a quick burst to the bucket and score.  Zion Mitchell, a 6’2 guard from Oviedo The Master’s Academy, can be found playing either guard spot during a game.  He has good passing instincts, an accurate shot from deep, and makes good pass vs. shot decisions when driving to the basket.  Anthony Wilcox, a 6’2 guard from Lakeland, fits the team’s mold of lengthy athletes with skill.  Wilcox is at his best when he can attack the basket.  He also uses his length, speed, and quickness well on defense.  Mark Amoukei, a 6’6 forward from Orlando Christian Prep, is an athletic rebounder and interior defender.  He gets most of his points on opportunity shots around the rim.  Luka Lazavevic, a 6’8 forward from Admiral Farragut in St. Petersburg, brings size, interior defense, rebounding, and some basic post moves to the court.

Another independent group that relies more on speed than size, Judah Nation 16U was impressive on Saturday.  Ta’Veon Jones, a 5’7 blur from Orlando Central Florida Christian Academy, pushes the pace, excels at finding open teammates for shots after breaking down the defense, and is a dangerous outside shooter.  Mike Drayton, a 6’3 wing from Victory Rock Prep in Bradenton, impressed with his athleticism, ability to stroke the ball from beyond the arc, and activity on the defensive end.  Cam Simpson, a 6’6 wing from Central Florida Christian, is the tallest player on the team but he is a knock-down three-point shooter with great range.  Simpson is improving as a guy that can make plays off the dribble.  Austin White, a 6’3 guard from Tampa Plant, is another three-point threat.  Just when you think he is limited to that, he scores on a drive or grabs a rebound and pushes the ball down the floor for points.  Jordan Buchanan, a 6’5 wing from Pensacola Washington, is an ultra-athletic wing that must be accounted for in transition.  He is a high riser that finishes above the rim as well as an active rebounder and versatile defender.  Taylor Thompson, a 6’0 guard from Jacksonville Impact Christian, R.J. Feliz, a 6’1 guard from Lake Wales, and Ethan Johnson, a 6’2 guard from Seminole, Georgia all bring great energy and an attack mentality to both ends of the floor.

This group will play on the Adidas circuit.  Ameer Ramadan, a 5’11 guard from Orlando Christian Prep, controls the basketball, gets and keeps his teammates involved, and is a very accurate shooter from deep.  Chris Arias, a 6’5 guard from Providence in Jacksonville, will be found playing either guard spot for the team.  He has great size and court vision as a point guard and transitions to a confident perimeter scorer when not running the offense.  Chandler Watts, a 6’4 wing now at Orlando Dr. Phillips, is a strong-framed slasher that finishes well at the rim in a crowd.  His perimeter shot is improving and his athletic ability allows him to grab rebounds over bigger opponents.  Fredy Sylla, a 6’6 wing from Potter’s House Christian Academy in Jacksonville, is a smooth athlete that contributes on the glass, is active on the defensive end, and scores well in the paint.  Misael Cruz, a 6’6 forward from Central Pointe Christian in Kissimmee, shoots the ball well from the perimeter and rebounds well at both ends of the court.  Calvin Liptrot, a 6’3 wing from Orlando Jones, is a reliable shooter out to the three-point line, a strong driver and finisher, and active defender that comes up with a lot of steals and loose balls.  Cheo James, a 6’1 guard from Orlando Boone, contributes at both guard spots.  Joseph Valeria, a 6’6 forward from North Florida Educational in Jacksonville works the glass and covers a lot of ground defensively when he takes the floor.