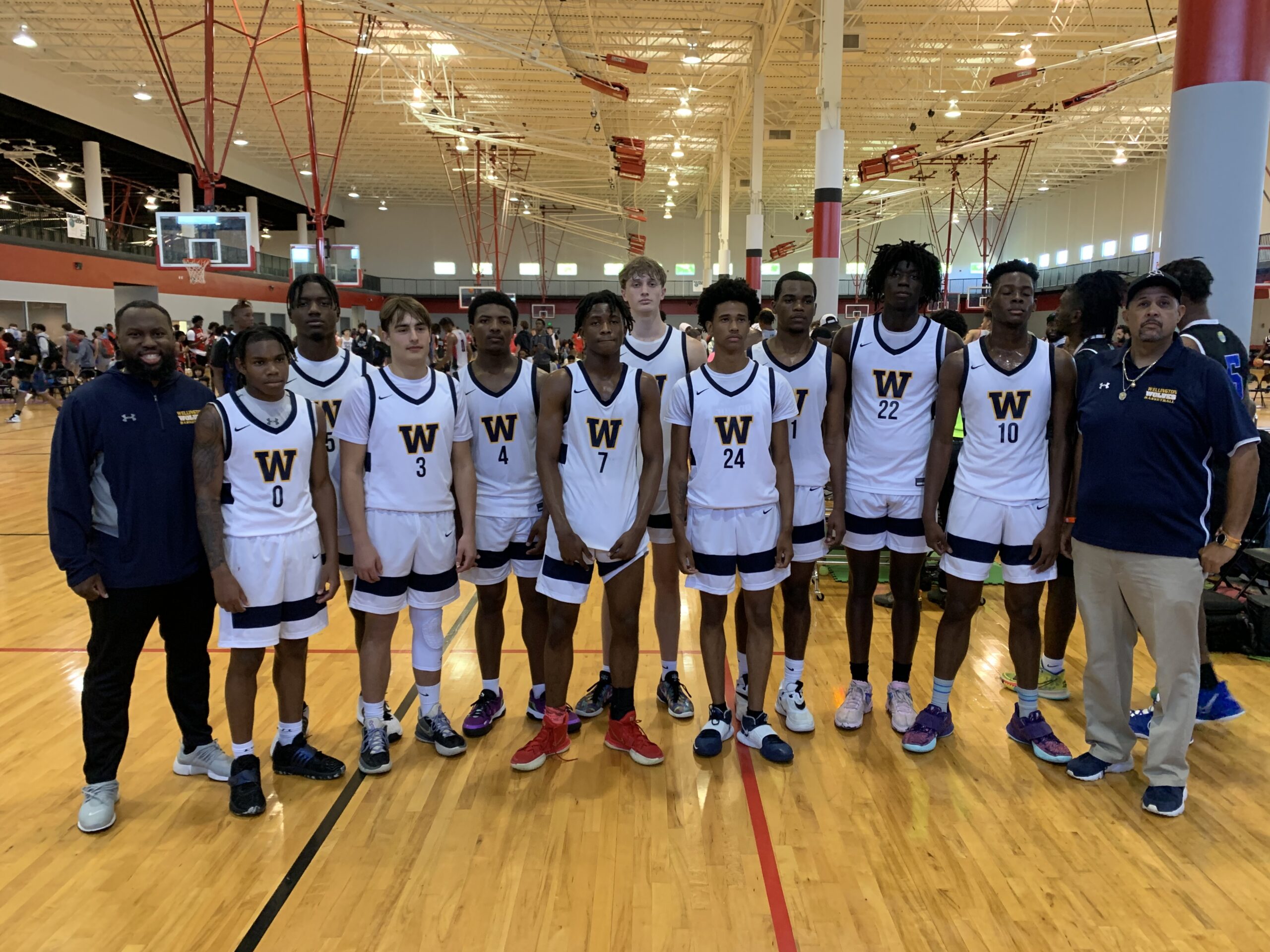 There is a South Florida Flair to this report from the Travel Team Jamboree!

This program is like a calm oasis in the chaotic sea that can sometimes be travel team basketball, especially at the start of the season.  The Wolves looked in mid-season form during their four games over the weekend.  We could spend an entire article on the play of Calvin “Bo Bo” Sirmans, a 5’7 guard from Lake Worth, from this past weekend.  Suffice it to say that he was the Player of the Weekend for many observers.  He was just too smart, too skilled, and too good to be contained.  It would not surprise if more than one so-called “high profile” program asks Sirmans to join them.  However, he wasn’t the only Wolf to eat.  Matt James, a 6’8 forward out of Jupiter Christian, was incredibly active on both ends of the floor.  He dunked home lobs and put back missed shots by teammates on the offensive end and patrolled the paint on defense, getting more than his fair share of blocked shots.  Andrew Sinewy, a 6’5 wing from Boca Raton St. Andrew’s, scored from the perimeter and was active on the glass.  Reggie Reinhardt, a 5’11 guard from Wellington, is an active guard that does a little bit of everything.  He can handle the ball, initiate the offense and score when called upon.  Shawn Cinneus, a 6’4 wing from Wellington, runs the open floor, scores on the break, and outrebounds bigger opponents.  Eric Perez, a 6’1 guard from Wellington, Jordan Price, a 5’10 guard from Wellington, and Brian Wright, a 5’10 guard from Pope John Paul II in Boca Raton, up the tempo when in the game off the bench.

If you thought Florida Pro was a “one hit wonder” because of their success with the Thompson Twins last spring, you are sadly mistaken.  No doubt this squad will get people to sit up and take notice this coming spring and summer.  Anthony Edourds, 6’5 wing from Hallandale, has length and athleticism.  He is quick to rebounds, sprints the floor in transition, and finishes well above the rim.  Carl Parrish, a 6’2 guard from Miami Norland, pushes the pace, gets to the rim in the half-court, and generally makes good shot vs. pass decisions while moving at full speed.  Koree Cotton, a 6’5 wing from Miami Southridge, is an energetic scorer with range to the arc.  A long and athletic lefty, he has a quick first step, scores well in traffic, and actively pursues rebounds on both ends of the court.  Ryan Richardson, a 6’3 guard from Miami Country Day, stretches the defense with his outside shot but is a good rebounder and passer.  Stone Bureau, a 6’0 point guard from Riviera Beach Suncoast, brings toughness and savvy to his role on the floor.  He is difficult to keep out of the lane, finds teammates for easy baskets and draws a lot of fouls.  Johnny Papadaukas, a 6’9 forward from Cardinal Gibbons in Fort Lauderdale, is a presence inside at both ends.  He can post up and score and is a good passer out of both the high and low post area.  Papadaukas challenges shots on the defensive end and controls his rebounding area.  Marko Myrtidas, a 6’1 guard from St. Thomas Aquinas in Fort Lauderdale, provides an offensive spark off the bench.  Michael Bradley, a 6’0 guard from Miami Mater Lakes, shoots the ball well off the catch and is improving as a guy that can score off the bounce.  Max Turner, a 6’5 forward from Weston Cypress Bay, does all the little things that coaches love and knows how to win.

A solid group primarily from Palm Beach County, B4L had a successful weekend at the Jamboree.  Kyle McNeal, a 6’4 guard from Palm Beach Gardens Dwyer, plays both the point and off-guard spots at a high level.  He is very quick to the basket, has a respectable mid-range game, and has the explosiveness off the floor to embarrass defenders at the rim.  Blake Wilson, a 6’5 wing from Dwyer, is another athlete with length.  He impressed this weekend with his ability to make shots out to the arc, make an impact on the offensive glass, and guard on the perimeter.  Juan Rodriguez, a 6’7 forward from Jupiter has an inside/outside aspect to his game.  He can score from the perimeter or post-up in the paint, runs the floor well, and controls his rebounding area.  Kamari Hilton, a 6’1 guard from Stuart Martin County, and Jajae Moncrief, a 6’1 guard from Palm Beach Gardens Benjamin School, are quick, active ball-hawks on defense and effective attacking the basket on drives.  Aiden Singleton, a 6’0 point guard from Fort Pierce John Carroll, does a good job of creating opportunities for teammates, has active hands and feet on the defensive end, and keeps the defense honest with his ability to score from the perimeter.  Jack Chamberlain, a 6’5 forward from Palm Beach Gardens, brings strength and toughness off the bench.

Relatively new to the scene, the Sharks have players from all over South Florida, not just Palm Beach County.  Tareeq Anderson, a 6’7 forward from Jupiter Christian, was one of the bigger surprises over the weekend.  Thin, long, and bouncy, he owned the lane on both sides of the floor.  He plays hard and despite his lack of heft he doesn’t mind playing physical inside.  Sergio Hayes, a 5’10 point guard from Palm Beach Central was solid with his point guard play.  Hayes looked to get others the ball but when the opportunity presented itself he showed he can make shots.  Malachi Hippolite, a 6’0 guard from South Miami, had a lot of success from beyond the three-point line this weekend.  Anthony Coby, a 6’3 guard from Lake Worth, not only scored from deep with consistency but surprised a bit with his ability to score off the bounce.  Lemarco Wilson, 6’2 from Royal Palm Beach and Kirk Daniels, 6’3 from North Miami, are sparks off bench.  C.J. Beaumont, a 6’7 wing from Palm Beach Gardens Dwyer, helps out on the interior.

A long-time staple on the circuit, observers can always count on players in the SFL Elite program to put forth maximum effort on every possession.  Jamai Tejada, a 6’0 point guard from Miami Northwestern, has a high basketball IQ, get his teammates easy shot opportunities, and makes shots out to the arc.  Brandon Johnson, a 6’4 wing from Lauderdale Lakes Boyd Anderson, plays with a great deal of energy, relentlessly attacks the basket, and scores well in a crowd.  Freddy Acosta, a 6’3 wing from Miami Northwestern, makes a living on the offensive glass, scores well on drives, and is a high-level athlete.  Thyeim Williams, a 6’1 guard from Hollywood Macarthur, is a bundle of energy at both ends of the floors, causing havoc on the defensive end and getting to a lot of 50/50 balls.  Armon Forrest, a 5’10 guard from Pompano Beach Ely, plays like what you would expect from an Ely Tiger: tough, unselfish, and committed on the defensive end.  Cedric Jean-Louis, a 6’6 forward from Boyd Anderson, provides additional size off the bench.