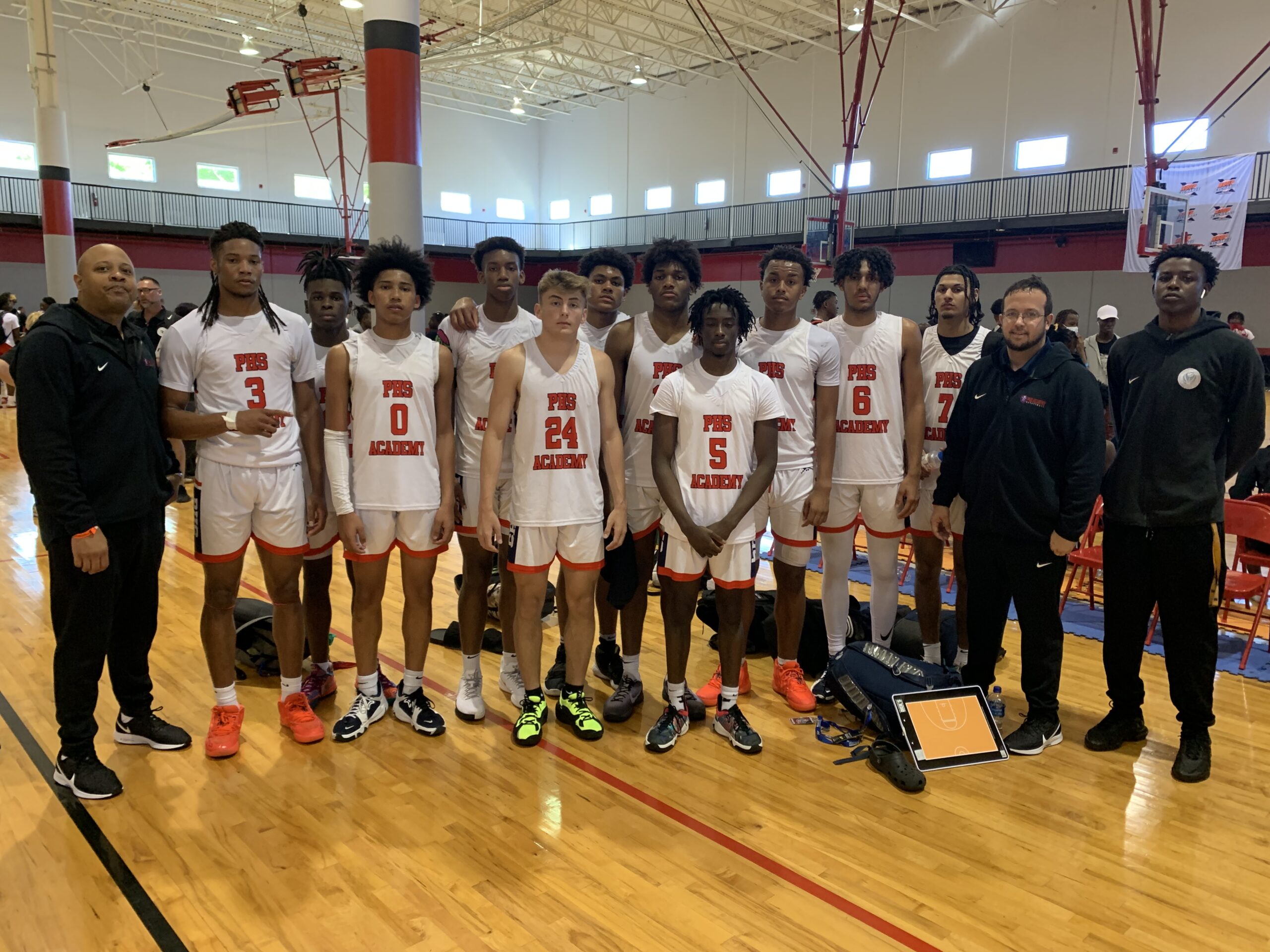 More from a LOADED 17U division at the Travel Team Jamboree.

Judah Nation continues its rise as one of the better independent programs in Florida.  The group has some quality players at all positions that college coaches from all levels will want to get a look at.  Eddrin Bronson, a 6’2 guard from Tampa Catholic, played up with the group last year and continues to be a key cog to their success.  He’s a dangerous scorer with great range on his shot.  George Kimball, a 6’1 guard from Tampa Berkeley Prep, is an athletic point guard that delivers assists as well as scores at a high level. Dallas Jones, a 6’5 wing from The Rock School in Gainesville, has a feathery touch from the perimeter but a strong frame and solid handles that get him to the basket where he finishes well in a crowd.  Blaise Wallace, a 6’6 forward from Tallahassee Maclay School, continues to display loads of versatility.  He’s an improved perimeter shooter and passer while continuing to be an energetic rebounder and defender.  Wallace pursues offensive rebounds with a vengeance.  Gavin Aydelotte, a 6’10 big from The Benjamin School in Palm Beach Gardens, has a good frame, moves well up and down the floor, controls his rebounding area, and connects on shots to the arc, a modern day stretch four if you will.  Thad Burns, a 6’2 guard from Tallahassee Florida State University School, is a bundle of energy on both ends of the floor.  He shoots the ball well from the perimeter and aggressively guards the basketball.  Dylan Diaz, a 6’2 guard from Lake Minneola, contributes at both guard spots with his shooting, ball-handling and passing skills.  Jake Esterling is a 6’3 shooter deluxe from Tallahassee Chiles that stretches the defense with his perimeter shooting.  Harris Jackson fills in at multiple positions off the bench.

A quality group mostly from the Tampa Bay area impressed on Saturday at the Jamboree.  Trent Lincoln, 6’3 out of Tampa Wharton, was very effective in his ability to get to the basket off the dribble, where he either scored or got to the foul line.  Karmello Branch, a 6’5 wing from Tampa Catholic, worked the offensive glass, stretched the defense with his shot, and got out in transition for scores.  Brandon Naythanogjay 6’6 out of Clearwater American Collegiate brought toughness off the bench and worked the glass for rebounds.  Idell Walton, a 6’7 unsigned senior from Tampa SLAM Academy, uses his strength and athleticism to corral rebounds, score around the basket, and challenge shots on the defensive end.  Ahmad Cidi-Jailoh 5’10 from American Collegiate is a defensive presence on the perimeter.  Justin Kruszewski 6’0 out of East Lake has a reliable perimeter shot past the three-point line and is a sneaky offensive rebounder.  Jayden Hosein 6’3 from St. Pete is an unsigned senior that provides a punch on both ends of the floor off the bench.  Issac Broxey, a 6’2 wing from Lake City Columbia, is athletic, plays big for his size, and covers a lot of ground quickly on the defensive end.  Lamarian McFarlane 6’6 from American Collegiate brings physical tenacity and toughness off the bench.  Max Simms 6’5 from Tampa Jesuit has a nice three-point shot but will take it strong to the rim if overplayed.  Chandler Davis 6’6 from Tampa Wharton is also a perimeter threat for the team.

Another group with players from the Bay area, Team Speights has had a lot of success over the years and that doesn’t seem likely to change in 2022.  Andre Wright, a 5’11 unsigned senior, is a classic pass-first, but not pass-only, point guard.  He’s also very disruptive on the defensive end with his speed, quickness, and ability to anticipate the direction of the basketball.  Henry Hurst, a 6’2 guard from Tarpon Springs East Lake, has the body of a football player but has a soft touch on his jumper out to the arc and makes good pass vs. shot decisions when driving to the basket.  Javier Maize, a 6’5 unsigned senior out of Speights Academy in Tampa was very impressive with a high basketball IQ, consistent shot out to the three-point line, and passing skills.  Kamrin Orlol, a 6’3 guard from Admiral Farragut in St. Pete, made several shots from the perimeter on Saturday.  Greg Maxwell, a 6’2 guard from Trinity Catholic in Ocala, is fast with the ball, puts pressure on the defense with his penetration, and is a surprisingly effective offensive rebounder for a player his size.  Anthony Chanceller, a 6’6 wing from Barron Collier in Naples was versatile in his ability to score the basketball.  He hit a couple of threes, knocked down a few mid-range jumpers off both the catch and the dribble, and finished a couple of straight line drives at the hoop.  Isaiah Jones, a 6’7 forward from Speights Academy, has a solid frame, is a good leaper, and does most of his damage around the basket at both ends of the floor.  Chamberlain Campbell, a 6’3 guard from St. Peter Lakewood, surprised with his athleticism.  He had a couple of blocks, completed a lob for a dunk and scored an old-fashioned three-point play in a crowd.

This group, mostly out of Polk County, may be undersized but plays with a tenacity that will make them successful this spring and summer.  The parts are interchangeable.  Seth Matthews from Lake Alfred Discovery at 6’5 and Marshall O’Hearn at 6’3 from Sebring are the only players over 6’0 on the roster right now.  Matthews is called upon to hold down the interior and does a decent job.  O’Hearn is a reliable shooter from deep that isn’t scared to attack the basket when given the opportunity.  Jaden Excell, a 5’9 guard from Lake Wales and Derajah Hardy, a 5’9 guard from Lakeland, are very effective scorers, whether in transition or attacking set defenses off the dribble.  Players such as 5’8 Karl Knighton from Flagler Beach Palm Coast, 6’0 Jay Leonard from Frostproof, 6’0 Lax Manclava from Discovery, 5’10 Terrel Redding from Winter Haven, 6’0 Donovan Dangerfield from Apopka, and Joshia Hardy from Riverview Sumner are all quick, aggressive with the ball to the basket, and play in-your-face on-ball defense.