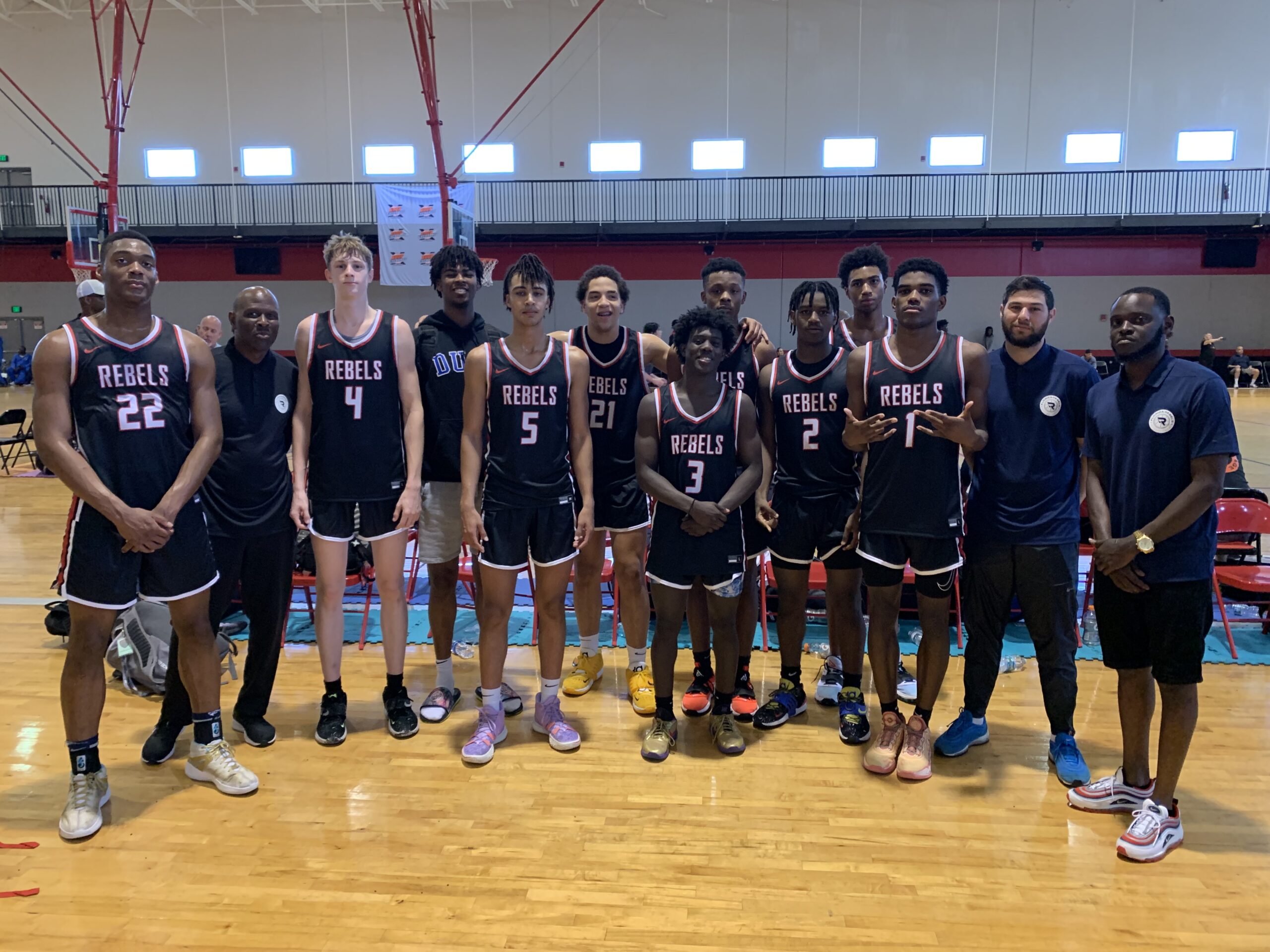 The Big House in Tavares was packed full with quality teams ranging from 13U to 17U at the Travel Team Jamboree put on in partnership by Source Hoops and The Hoop Exchange.  There is A LOT of ground to cover over the next several days, so let’s dive right into it with a look at some of the higher profile teams that participated.

Formerly know as Each One Teach One, the Florida Rebels is arguably the flagship program from the Sunshine State in Nike’s EYBL.  Despite playing without Sean Stewart, a 6’8 Duke commit from Windermere, the Rebels had little issue in exerting their will and flexing their muscles in their second contest of the day.  Edgerrin “Jizzle” James, a 6’2 guard from Orlando Olympia, was a high-level scorer this past high school season, but surrounded by this much talent he seems content to showcase his abilities as a set-up man and opportunistic scorer.  Jason Jackson, a 6’3 guard from Sarasota Riverview is an electrifying athlete on the wing.  He thrives in transition and is exceptionally hard to stop when heading to the basket.  Tristan Gross, a 6’5 combo guard out of St. Pete, scores well from the perimeter on either side of the arc but will get to the basket if overplayed for his shot too aggressively.  Jordan Burkes, a 6’7 wing out of Kissimmee Central Point Christian, is long, athletic and lethal both on the break and when playing the point of the team’s extended pressure defense.  Burkes is a good rebounder, finisher, and surprisingly solid ball-handler.  Sam Walters, a 6’8 forward from The Villages, has an inside/outside skill set that makes him a versatile offensive performer.  He will surprise opponents with his athleticism and ability to knock down shots away from the paint.  Cameron James, an athletic and strong 6’5 wing, is a highlight reel waiting to happen with either a big dunk or big block.  Creed Williamson, a 6’8 big from Arkansas, provides toughness and rim protection on the defensive end and a post presence on offense.  Cole Owens provides solid support inside while Dontrel Jenkins gives a boost to the backcourt.  The Florida Rebels certainly won’t be the biggest team in the EYBL put they are more than happy to sacrifice size for speed.

The premier Adidas program in the state, Southeast Elite looks like it has another solid group to compete nationally.  Mikel Brown, a 5’11 freshman playing up a couple of levels, is completely healed from the broken hand that kept him from fully participating in Orlando Christian Prep’s Class 2A championship run this season.  Brown will have to get used to the physical play of the circuit but his skills and basketball IQ are certainly at that level.  Isaac Tapia, a 6’3 wing from North Florida Educational in Jacksonville is phenomenal in the open court, quickly gets going downhill to the hoop and is a consistent finisher with either hand around the basket.  Eduardo Placer, a 6’4 guard out of Windermere Prep, is a savvy player that can knock down shots from deep, attack and score at the basket, and post up smaller guards to score in the paint.  Jaylen Robinson, a 6’6 sophomore from Jacksonville Providence is a strong, sturdy, and athletic wing that flourishes in transition, attacks the offensive glass, and is a challenging defender.  Carson Cooper, an unsigned senior out of IMG Academy, is 6’11 with good post skills.  While he will rarely be the most athletic big on the floor, Cooper knows how to use his body, positioning, and knowledge of the game to make up for it.  Mason Lee, a 6’4 wing from Jacksonville Providence, is an accurate shooter from long range with a quick release.  He will also head to the hoop with the ball if overplayed too much for the shot.  Karmani Gregory is an unsigned senior from Bradenton Southeast.  A 6’3 combo guard, he scores the ball well but is also alert to find open teammates for scoring opportunities and quickly get them the basketball.  Melian Martinez, a 6’10 unsigned senior out of North Florida Educational, actively rebounds at both ends of the court and challenges and changes shots in the paint.

The lone Florida representative in the Under Armor Association, Team Breakdown always brings a unique flair to the hardwood.  This year’s team features a lot of size and scoring punch from the perimeter.  Kris Parker, a 6’6 junior from Crossroad Academy in Quincy, has the skill set to play either guard spot.  A long athlete with a reliable perimeter shot, Parker scores in a variety of ways.  Greg Spates, a 6’6 junior from Coral Springs, is a solid ball-handler and looks to get the ball to other teammates that have better shot opportunities.  Parker and Spates combine to make a lengthy and aggressive defensive backcourt.  Jasai Miles is a 6’6 wing out of Miam Country Day that is a dangerous three-point shooter but also has the athleticism and speed to get past defenders and posterize opponents at the rim.  Braylen Jackson, a 6’5 wing from Oldsmar Christian, is fascinating in his ability to find ways to put the ball in the basket.  The lefty has good range on his shot but it is uncanny how he can finish thru contact in a crowd at the basket.  Nicola Moretti, a 6’0 unsigned senior from DME Academy in Daytona is more in the traditional point guard role but is a stellar outside shooter.  He makes good pass vs. shot decisions when driving to the basket.  Dominic Betancourt, a 6’8 junior from Tampa King, provides an interior presence at both ends of the court.  He rebounds his area, runs the floor, sets a solid screen and scores around the rim.  Owen Oqueno, a 6’8 senior from Kissimmee Central Pointe Christian is a skilled big that can step away from the lane and make shots, is active on ball-screens, and is a good passer.  Cole Gingelski, a 6’10 junior at Tampa Alonso, didn’t play this weekend but he is another body that will help inside.

Arguably the top independent (non-shoe affiliated) program in the state this travel season, 1 Family has the talent to play with anyone.  Though 6’8 junior Dylan James didn’t play this weekend, he is a tough matchup with his skillset and athleticism.  Too quick for bigs out on the perimeter and too big for smaller opponents around the basket, James should get a lot of positive reviews this spring and summer.  Sam Alexis, a 6’8 unsigned senior out of Apopka, is young for his grade and is looking to take a prep year to gain strength and continue to improve his skills.  Alexis runs the floor well, cleans up offensive rebounds with authority, can step out and make perimeter shots, and give opponents second thoughts about trying to score around the basket.  Josh Hayes, a 6’9 junior from The Rock School in Gainesville, provides another athletic presence on the inside.  Harvey Wilson, a 6’7 junior from Lakeland Santa Fe Catholic, will get a chance to display his developing inside/outside game with the team.  Jaylen Smith, a 5’11 guard at Orlando Edgewater, is a dynamic scorer from all three levels.  Joel Harrison, a 6’0 guard out of Carrollwood Day in Tampa, is quick with the ball, loves to push the pace, is an opportunistic scorer and a guy that really digs in when guarding the basketball.  Isaiah Sutherland, a 6’5 wing from Orlando Christian Prep, impacts off the bench with his outside shooting ability and penchant for grabbing and converting missed shots on the offensive end.  Matt Vaughn, a 6’1 product of Winter Haven, brings great energy off the bench and plays with a no-holds-barred approach at both ends of the floor.

The Ballers should live up to their “Showtime” moniker with this group.  Chris Mubiru, a 6’5 wing from Orlando West Oaks Academy, was very good on Saturday.  He unleashed a very accurate three point shot that we didn’t see much of during the high school season, proved to be an alert passer to open cutters in the lane, and a very active pursuer of rebounds and loose balls.  Moses Horne, a 6’2 guard from The Rock School in Gainesville, was solid in his ability to run the team, push the pace, and score from either side of the arc when given the opportunity.  Alex Doyle, a 6’7 unsigned senior from DME Academy out of Daytona was very much a revelation on Saturday.  He crashed and converted on the offensive glass, knocked down shots from deep, finished above the rim on the break and passed the ball well.  Marvin Blumfield, a 6’8 unsigned senior also from DME, has a solid body, good athleticism, and plays hard on both ends of the court.  Grace Aluma, a 6’0 senior at West Oaks, is a strongly-built point guard that pushes the pace and guards the basketball with a great deal of intensity.  Emil Fleu, a 6’7 junior from Orlando Downey Christian, is long, athletic, active on the glass and covers a lot of ground quickly on the defensive end.  Ibrahim Traore, a 6’8 sophomore and 6’8 junior Kaleel Stillman, bring size off the bench.  Nylan Rehm from Ocala Forest and Tyrell Smith from Riverview Sumner are quality reserves in the backcourt.