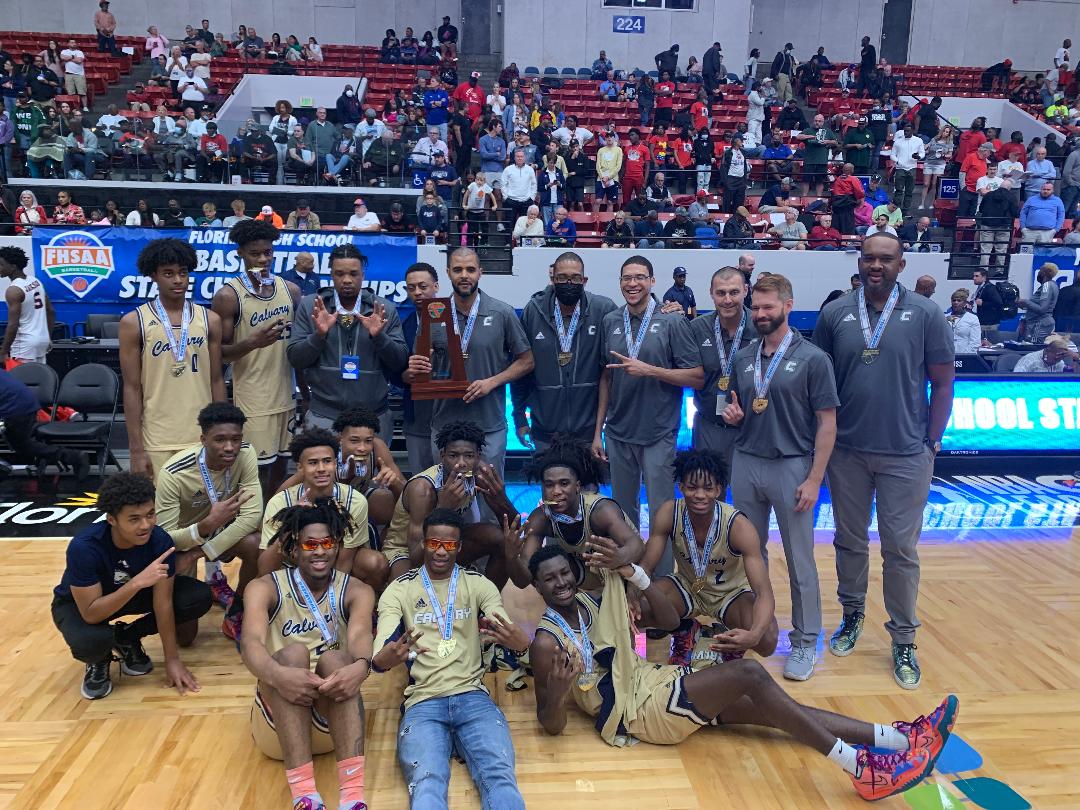 Fort Lauderdale Calvary Christian surprised no one with their success this year.  After winning the Class 3A state title in 2021 with an all-underclassmen line-up, there was little doubt that big things were ahead for them in 2022.  Adding 6’8 FAU signee Brenan Lorient certainly aided the cause.  They finished fifth at the loaded City of Palms Classic, losing only to Milton out of Georgia.  The Eagles also took Montverde to overtime before losing on a buzzer beater.  Along the way, they defeated both Orlando Christian Prep and Orlando Dr. Phillips, the two other nationally-ranked Florida teams.  Having a starting five that goes 6’4, 6’5, 6’8, 6’8, 6’9 and all but one of them high-major D-I players certainly helps but getting a group that talented to play together as Calvary is arguably harder than coaching a team with just one or two college-bound talents.  The Eagles’ season isn’t over yet, as they are the top seed in the State Champions Invitational, an event put on by the same group that puts on the GEICO Nationals. Currently ranked third in Max Preps rankings of public high schools, the Eagles have soared high all season.

Ponte Vedra was on few, if anybody’s, radars at the start of this season.  However, by the time the playoffs rolled around, it was clear that this group of talented players running a Princeton-style passing game could beat teams bigger and more athletic than the Sharks were.  They lost only three times in the regular season, came from six points down late in the semi-final to win by three points and then lost a tough four-point decision to Martin County in the state title game.  It was an impressive run by a group of guys that have been together for a long time.

Wouldn’t it be great if Florida held a Tournament of Champions for all its classification winners?  If that had taken place this season, below is our seeding for the bracket.

#2 Seed: Miami Christopher Columbus – A VERY difficult in choice between the Explorers and Orlando Christian Prep.  However, winning a loaded Class 7A tournament and knocking off an Orlando Dr. Phillips team looking to repeat with three high-major D-I signees gives them the nod.

#4 Seed: Stuart Martin County – The Tigers took care of unfinished business this season.  Last year, the squad was undefeated until losing in the regional final.  This time around, they invoked the spirit of the Don Wallen-era to bring a championship back to one of the more passionate basketball fan bases in the state.

#5 Seed:  Tallahassee Florida State University School – Some thought that FSU School would take a step back after Jaylin Martin left to go to Overtime Elite.  The Seminoles just used that for motivation.  They took on a more challenging schedule, finally got past Jacksonville and Orlando area teams in a top-heavy region and won by three points in the semis and one point in the title game.

#6 Seed: Fort Lauderdale Stranahan – Their run to the Class 6A title was a bit of a surprise.  However, those that watched them play were impressed.  The Mighty Dragons didn’t have any “stars” per se, but they were a tough out every night.  Their ability to play defense and control tempo wore teams out.

#7 Seed: Starke Bradford– A lack of size and depth puts them here but there is little question they would give any of the above a tough game.

Below is an early look at a team and player to watch in each classification heading into 2022-2023.  These are the teams and players that we think will have a breakout season