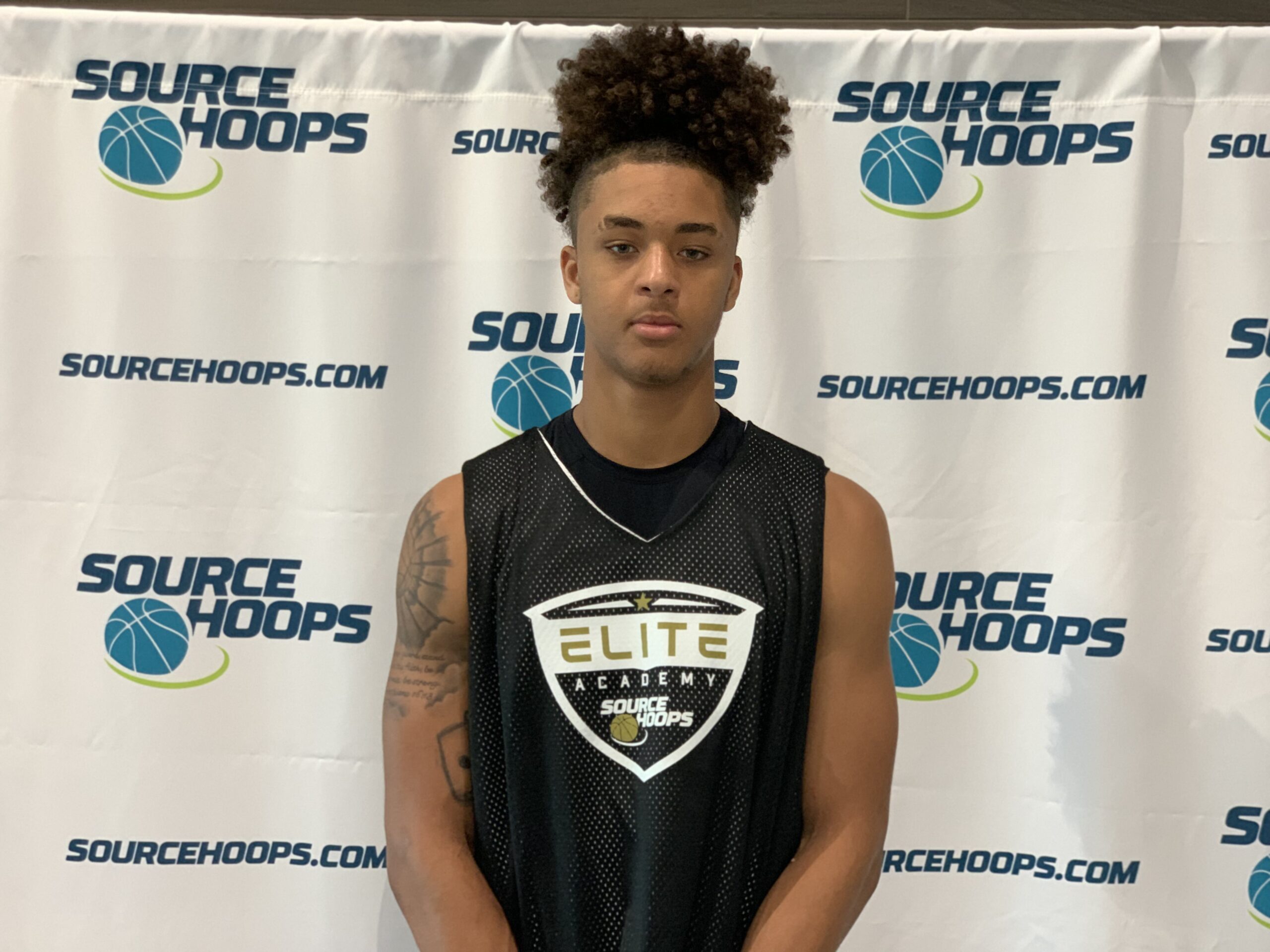 More from our Academic Elite Academy that took place this past Saturday at The First Academy Fieldhouse in Orlando.

Bryce Simmons, Orlando West Oaks Academy: A 6’1 junior, Simmons is a strong guard with a good burst to the bucket.  He gets to the rim quickly and uses his strength and solid frame to score in traffic.  Simmons also proved to be a reliable perimeter shooter on either side of the arc.  Not surprisingly, he is an alert and aggressive defender.

Dominic Betancourt, Oldsmar Christian: A 6’8 senior, Betancourt has progressed tremendously since we saw him play for Tampa King in the FHSAA playoffs back in March.  He has improved scoring tools around the basket and now sports a reliable perimeter shot.  An active rebounder at both ends of the floor, Betancourt came away with a great many offensive rebounds and cashed in the majority of his putback opportunities.  A good athlete, he surprised with his ability to block shots and protect the basket.

Misael Cruz, Kissimmee Central Point Christian: A 6’6 junior, Cruz has always been known for his outside shooting prowess.  On Sunday, he did a good job of putting the ball in the floor and driving for scores, not simply settling for jumpers.  Cruz also showed more in the way a being a playmaker, getting the ball to open teammates for shots when his path to the hoop was cut off.  He has improved his strength and athleticism and is now a more effective rebounder at both ends of the court.

Kervin Knaggs, Auburndale: A 6’1 senior, Knaggs is a strong guard that overpowers opponents to get to the rim, then uses that strength to finish through contact in traffic.  He has become a respectable perimeter shooter out to the three-point line and if overplayed for the drive will knock down those open looks.  Knaggs is capable of running the offense and looks to get teammates involved whenever possible.  He makes life difficult on the defensive end with active hands and feet.

Ibrahima Traore, Orlando West Oaks Academy: A 6’9 junior, Traore has improved a great deal over the summer and still displays a tremendous amount of upside.  His body has filled out some and has gotten stronger.  The result is now Traore is a much better finisher in traffic.  He is a high-level athlete that runs the floor, rebounds and both ends, and rejects shots.  An improving perimeter shooter, Traore is still at his best when he can put back offensive rebounds, throw down lobs at the rim, or beat the defense down the floor and score in transition.

Eric Mejia, Kissimmee Central Point Christian: A 6’4 junior, Mejia is a dynamic scorer that will blow by defenders or make shots over them.  He plays at a fast pace and is aggressive at both ends of the court.  There are times where Mejia needs to pull in the reigns a bit and play more under control, but that will come with experience.  With his size and exceptional scoring ability, his recruiting level could rise quite a bit.

Isaiah Dorceus, Orlando West Oaks Academy: A 6’0 junior, Dorceus is a super-active and aggressive guard.  On Sunday he was non-stop in his attack on the defense and in assaulting the rim.  While a somewhat streaky outside shooter, Dorceus makes enough to be respected.  That simply opens up driving lanes that allow him to quickly get to the basket.  Dorceus is also an active defender both on and off the ball.  He is quick to loose balls, rebounds well for his size, and anticipates the passing lanes well.

Cameron Simpson, Orlando Oak Ridge: A 6’6 junior, Simpson’s range is the moment he is in the gym.  He has a quick release and needs little room or time to get off his shot that falls with a great deal of consistency.  On Sunday, he surprised a bit by being more willing to attack the basket off the dribble.  Simpson had some success with it and hopefully will balance out his offensive arsenal in the future.  He has a long wingspan and uses it well to corral rebounds and clog the passing lanes.

Gavin Dunn, Orlando West Oaks Academy: A 6’4 junior, Dunn is the type of player that the baseline highlight reel gang loves.  He explodes off the floor, is a forceful finisher, and has no fear of contact when going up to score at the basket.  Dunn makes enough perimeter shots to keep the defense honest.  He channels the same energy on offense to the defensive end where he does whatever he can to disrupt the offense.