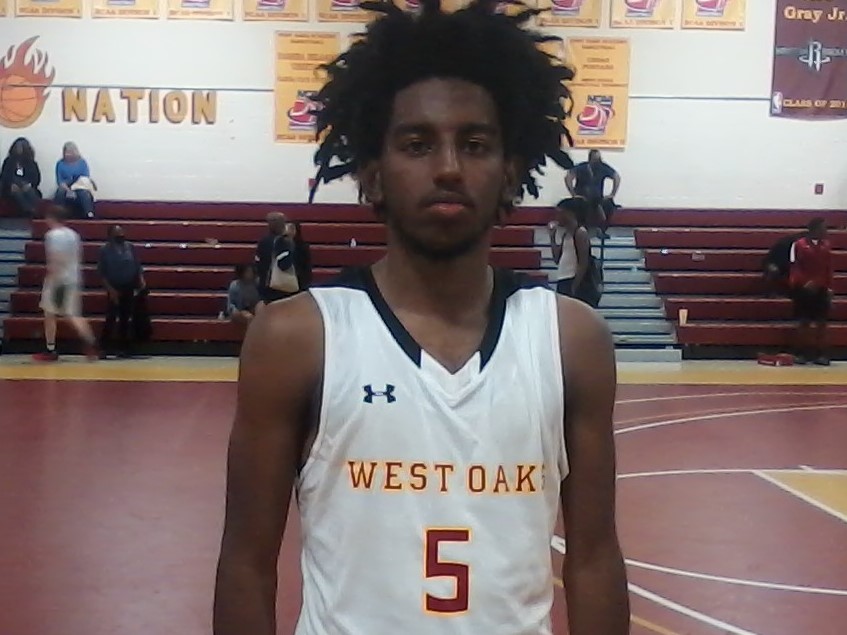 While some teams in the Sunshine Independent Athletic Association (SIAA) have already played games against teams outside of the league, last night was the first night of conference play.  We headed a short stretch down the road from the Source Hoops Hacienda to take in the matchup between Potter’s House Christian Academy out of Jacksonville and the West Oaks Academy Flames from Orlando.  Both teams have a bevy a college prospects for all different levels.

It was a surprising start to the game as the visiting Lions jumped out to a 9-0 lead in the first four minutes of the contest.  West Oaks struggled to find quality shots and its perimeter jumpers simply weren’t falling.  At that point, things began to change as (1) Potter’s House 6’7 senior and swiss army knife Elijah Mahi picked up his second foul and (2) West Oaks’ aggressiveness in attacking the basket got them into the bonus very early in the first half.  It took a while, but over the next six plus minutes, West Oaks tied the score with a 12-3 run.  With four minutes left in the first half, Potter’s House re-established its lead at 21-17 but West Oaks tied the score at 25-25 with 1:30 left.  Once again, Potter’s House grabbed back the lead.  West Oaks had a chance to tie the game at half-time but made only one of two free throws with six seconds left in the period.  After eighteen minutes of play, Potter’s House led by a scant 29-28 margin.

Much like the first half, Potter’s House jumped ahead early on.  At the ten minute mark, their lead was five at 42-37.  The Flames ran off five straight points to tie the game at the under nine minute media timeout.  Out of the break, West Oaks knocked in back-to-back three-point shots to take their first lead of the contest.  With just under four minutes left to play, the Flames held a 56-51 advantage and looked to be in control.  Potter’s House had another run left in them and with two minutes left trailed by just one at 58-57, plenty of time with a thirty-second shot clock.  However, a three from R.J. Moore and a transition dunk by Deshawn Jean-Charles pushed the score to 63-57 and Potter’s House was now forced to foul.  West Oaks would hold off the Lions from the free throw line and win by the score of 67-62.

West Oaks was led by 6’1 senior Maurice Odum with 16 points while, Jean-Charles tallied 14 points, twelve of those in the second half.  Faehim Meran, a 6’4 senior, added 12 points.

Odum struggled with his shot in the first half of the contest but knocked down twelve of his sixteen in the second stanza.  He made a couple of threes and also connected on some floaters in the lane.  Odum gets a lot accomplished outside of the scoring column.  He is a hounding defender on the ball, takes away passing lanes, and is a very sneaky offensive rebounder when it comes to snagging missed perimeter shots that bounce long off the rim.

Mahi’s scoring numbers (nine points) weren’t impressive, but observers can tell he means a lot to the Lions.  He essentially runs the offense as a point forward.  Mahi was 2-4 on perimeter shots (he was fouled on one miss and made both free throws) and had some success when deciding to take the ball strong to the basket.  He has good handles and court vision for a guy his size.

Of all the players in last night’s contest, it is Richardson that has the greatest potential.  His size and athleticism are things that can’t be taught.  He runs the floor, finishes above the rim, and protects the basket.  His first bucket, a long drop-step finishing thru contact and the “and one” free throw shows some promise as a scorer in the half-court.  The rest of his points came on put-back slams and transition baskets.  Patience will pay off in the future for any college that lands him.