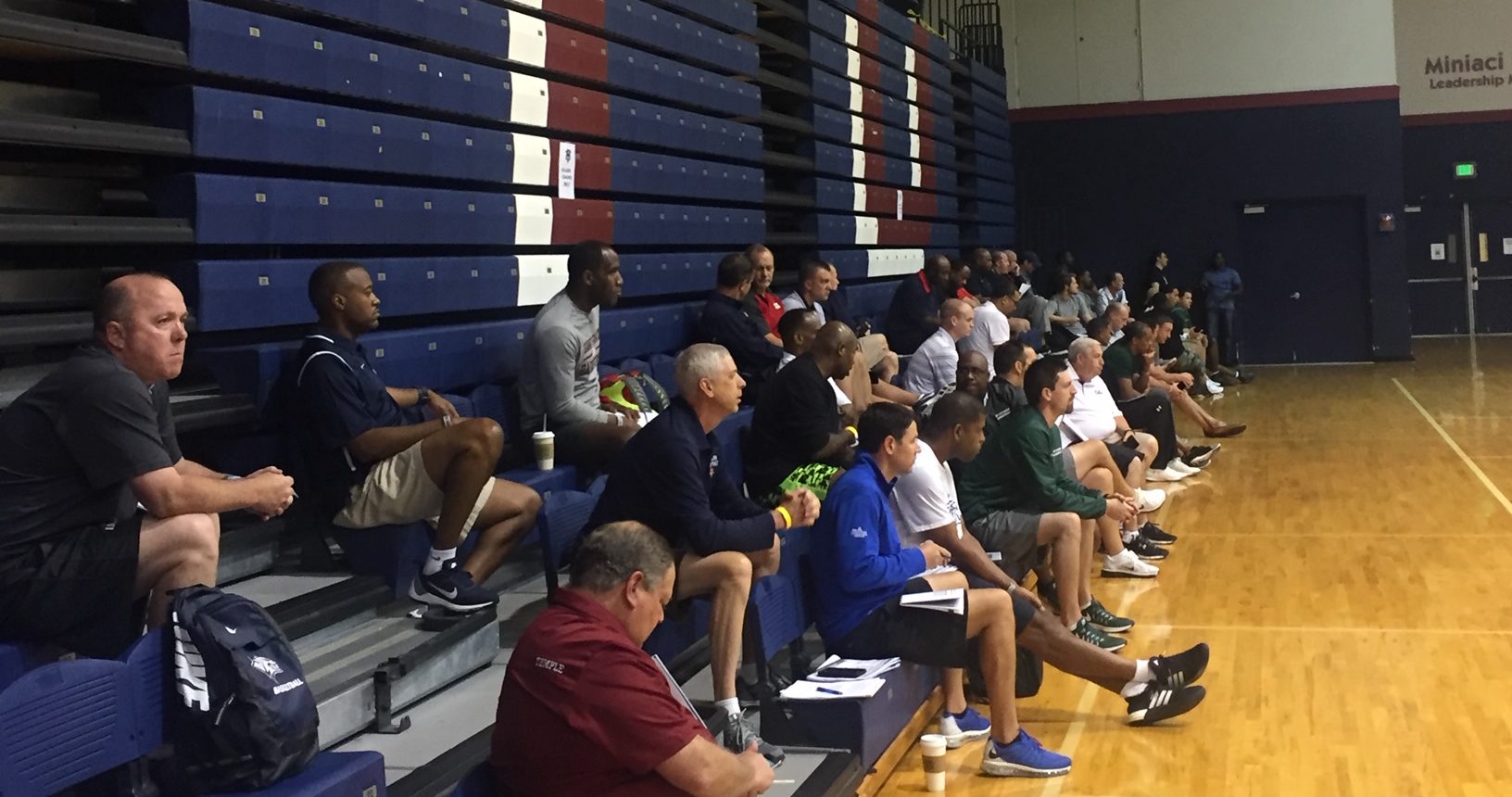 The All-American Jamboree, put on by Hoop Exchange, was held this past weekend at The Big House in Tavares.  The event brings in top-flight junior college, post-grad, and independent high school programs from around the country to compete against teams from outside of their natural region.  As a result, hundreds of college coaches from all levels attend to find recruits.

We focused our limited time on the teams from the Sunshine Independent Athletic Association high school programs and highlight just a few of the many talented players in attendance.

Braylin Garcia, Kissimmee Life Christian Academy: The 6’8 junior may be a little rough around the edges in terms of skill but he is highly productive.  He is very active on the interior in terms of offensive rebounding, cutting to the basket, flashing into the lane and taking the ball strong to the basket on one and two-dribble drives.  Garcia has good length, bounce, and plays with a high energy level.  While he didn’t attempt any perimeter shots in the contest we watched, his form and results from the free throw line suggest that isn’t an issue.

Maurice Odum, Orlando West Oaks Academy: The 6’1 senior is the next in a long line of standout guards for the Flames.  While not freakishly athletic or strongly built, he is still quite fast and quick with the ball.  He pushes the pace and forces the defense to make decisions.  Odum has good court vision and generally makes the right read when driving to the basket.  He takes good care of the ball and finds open teammates for shots if his path to the basket is cut off.  A respectable perimeter shooter, he will get more consistent in time.  Defensively he is very solid with active hands, quick feet, and excellent anticipation.

Zainudeen “Mo” Sabiu, Orlando West Oaks Academy: The 6’8 junior played little last year or this past off-season as he was recovering from injury, but he looked very healthy and ready to go this past weekend.  Athletic and strong, Sabiu knows what he is and doesn’t stray from his role.  Offensively, his job is to set screens, roll hard to the rim and catch lobs, pursue offensive rebounds with abandon and post up strong on occasion.  Defensively, he is able to actively switch out on smaller ball-handlers or trap the dribbler, challenge all comers into the lane, deny the post, grab missed shots and quickly outlet the ball to start the break.  Sabiu is fast up and down the court and plays hard every possession.

Markwan Adams, Bradenton Victory Rock Prep: The 5’11 junior is a Windy City transplant and looked very comfortable in his new surroundings.  He proved to be a proficient perimeter shooter, connecting on shots from behind the arc as well as coming off-ball screens in the mid-range area.  Quite quick and possessing a tight handle, there were several times when Adams manufactured points off the dribble.  We also liked the fact that he was more than willing to be patient and get the ball into the post.  Adams pushed the pace at every opportunity but didn’t force the issue.  Defensively, he anticipates well and is a strong on-ball defender.

Jalen Carruth, Kissimmee Central Pointe: The 6’7 junior wing out of Atlanta was one of the better shooters we saw on Saturday.  With range well past the arc, he has a quick release off the catch that makes opponents regret helping off of him.  A very good athlete, he is quick to get out in transition and score easy points.  He has the physical tools to be a good rebounder and defender from the “three” position.  With two years remaining at the high school level, he has ample time to develop his other skills and the mindset to become the best player every time he steps on the court.

Mycol Sanchez, Kissimmee Central Point: The 6’6 senior wing was another Central Pointe product that showcased a valuable shooting touch.  He connected on a bevy of three pointers and long twos that gave the defense fits.  On a couple of occasions, he responded to poor closeouts with strong drives to the basket.  Sanchez is a solid athlete with enough skills to play either wing spot.

T.J. Hurley, Gainesville The Rock School: A 6’5 senior from the Great White North, Hurley was impressive in his debut in the states.  He has a very quick release on his shot and that shot is very accurate past the arc.  Hurley handles and passes the ball well, makes good shot vs. pass reads, and quickly gets the ball to open teammates.  An above-average athlete, he is quicker and stronger than he appears, doesn’t mind physical play, and rebounds well.

Kameren Wright, Gainesville The Rock School: The 6’5 sophomore provides an explosive component to The Rock’s lineup.  He finishes transition and half-court lobs above the rim, has a quick burst on his drives and scores creatively in a crowd.  Right now Wright is best at attacking the basket, but his shot form looks good so it should only be a matter of time and repetition before he starts connecting on his perimeter shots with greater frequency.  Defensively he is disruptive, whether guarding the dribbler and breaking up pass attempts off the ball.

Joel Harrison, Oldsmar Christian: A 6’1 junior, Harrison has a lot of tools in his toolbox.  Both fast and quick with the ball, he easily beats defenders off the dribble to score at the basket.  He pushes the ball in transition and uses crafty footwork and body control to get by defenders to score.  Harrison has an attack mentality at both ends of the floor.  He defends the ball ferociously, forces turnover via traps and bad passes, and is quick to turn steals into scores.

R.J. Morgan, Oldsmar Christian: The 6’1 senior is very similar to Harrison in many ways.  The main difference is that right now Morgan is a more accomplished perimeter shooter than his junior teammate.  He had a personal run in the game we watched of a steal and score then consecutive three pointers that broke the game open for his team.  Another guy that plays his tail off at both ends of the floor, Morgan looked comfortable at either guard spot.

Elijah Mahi, Jacksonville Potter’s House: The 6’6 senior was one of our favorite players from this past spring and summer.  He didn’t disappoint on Saturday.  The PH roster only had two players on the roster that would be traditionally guards, but it was Mahi that was charged with running the offense.  Playing the position of point-forward, he gets the ball where it needs to go, can operate effectively in either role on ball-screens and looks to quickly get the ball either into the post or to open shooters on the perimeter.  Mahi is a decent perimeter shooter off the catch and is more likely to pass than look to score when driving to the basket.  However, when he decides to score, it usually turns out in his favor.  While he may not be an explosive athlete, he’s good enough to play and defend a variety of positions.

Fredy Sylla, Jacksonville Potter’s House: The 6’7 sophomore has a smooth game and quietly produces in abundance.  He currently scores best when he is slashing to the basket, whether that be in transition, short drives, or cuts into the lane without the ball.  He’s long and quickly gets to rebounds.  His perimeter shot continues to improve, especially in catch-and-shoot opportunities.  As his ball-handling improves, we can envision Sylla being a big wing guard in the future.

Andre Wright, Speights Academy: The 5’10 senior is one of only two non-post grads on the Speights Academy roster.  We saw Wright this summer play for Team Speights and were impressed with his ability to control a game from a defensive standpoint.  That remained true on Saturday.  We had Wright for seven steals on Saturday and they came a variety of ways: outright strip of the dribbler, cutting off the passing lane, digging down in the post, slapping the ball away from rebounders, etc.  If he didn’t get or cause a turnover, he made life absolutely miserable for the ball-handler.  While Wright missed the lone perimeter shot he took, his value on the floor is much more than just scoring.