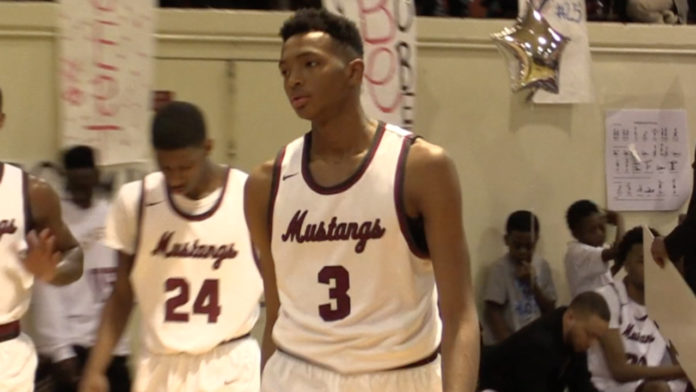 Chicago’s best vs. the nation’s best.  These teams could meet again next month in Memphis but for now it is for a place in the City of Palms finals.  East brings high college level talent, length and athleticism while Simeon will bring big city grit and toughness.  How will Simeon’s Talen Horton-Tucker handle the length of the Memphis skyline?

Horton-Tucker hit one of two free throws to open the contest, then Alex Lomas of Memphis East scored on a drive to give them the lead.  A free throw by Simeon’s Kejuan Clements knotted the score at two.  James Wiseman of Memphis East threw down a lob but Simeion took a lead on a three from Clements.  East then went on a run as Chandler Lawson hit a long two, Lomas scored on the break and Lawson hit a mid-range shot in transition.  With just under four minutes to play in the first, East led 10-5.  Simeon got back on the board with a three from Clements that was answered in kind by Ryan Boyce of East.  Messiah Jones put back a miss for Simeon and then Xavier Pinson tied the score at 13 with a three for Simeon.  Lomax put East back in front with a drive, then Simeon took a lead after a three point play by Pinson.  A three from Derrin Merriweather closed out the first quarter with East on top 18-16.

Simeon tied the score with a putback by Jones but East responded with a 7-0 run as Lawson hit a three and Wiseman scored twice inside to give East a 25-18 advantage.  After an exchange of free throws and empty possessions, a Horton-Tucker bucket made the score 26-22.  Johnathan Lawson then scored on a baseline floater for East and after a put back from Simeon, a three by Boyce gave East a seven point 31-24 lead with just under two minutes to play in the half.  A three by Simeon’s Bakari Simmons got the margin down to four but Lomax scored for East at the other end.  Jones and Horton-Tucker each scored inside for Simeon to close out the half with East clinging to a two point 33-31 lead.

Simeon took a one point lead to start the third quarter on a three from Pittman.  That didn’t last long as Lawson knocked down a three for Memphis.  A Jones putback tied the score at 36 then East’s Lawson scored four straight points to make the score 40-36.  A transition basket by Simeon’s Clements got them back on track for a moment but then the Simeon well went dry.  East capitalized with a pair of baskets from Wiseman and a three from Merriweather.  Now East had a comfortable 47-38 lead.  Jones stopped the bleeding for Simeon with a putback but another three from Merriweather made it a ten point lead for East at 50-40.  Zion Young hit a three for Simeon but Lomax answered with a two and then Malcolm Dandrige hit one of two free throws for East.  A dunk in transition by Horton-Tucker made it an eight point game at 53-45 with one quarter left to play.

Horton-Tucker hit a mid-range jumper to open the fourth quarter for Simeon.  A three from Lawson of East was offset by a three of Pittman of Simeon to keep the margin at six.  Dandridge put back a miss for East but then Simeon krept closer with a 7-4 run to make it a 60-55 game.  That would be as close as Simeon would get as East closed them out with an 8-2 run and led by eleven at 68-57 with two minutes to play.  Simeon ultimately ran out of time and East advanced to the finals with a 70-60 win.

Kenny Pittman led Simeon with 14 points while Xavier Pinson had 11 and Messiah Jones finished with 10 points.