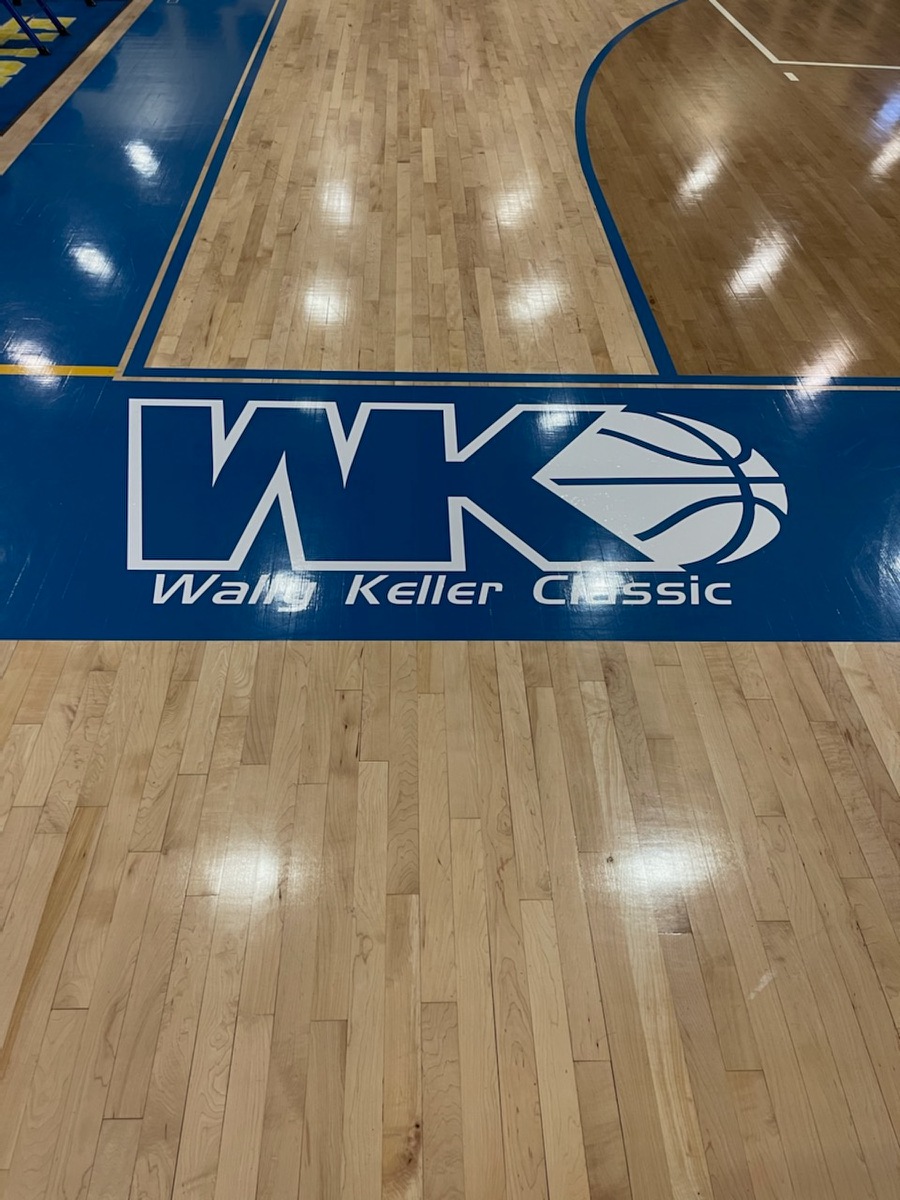 We headed down to Charlotte High School in Punta Gorda to take in the 17th Annual Wally Keller Classic.  A two-day event with games going on simultaneously in two gyms separated by a thirty-foot walkway, it is essentially non-stop hoops featuring not just the best teams from Southwest Florida but from other parts of the state.  We stuck with the action in the main gym where the top matchups took place.

Both teams were not at full strength for the contest.  Alex Lloyd, Westminster’s 6’4 sophomore scoring leader, tweaked his ankle the night before and was unable to go while Oldsmar was without head coach Jordan Fair.  Neither team got off to a fast start and at the four minute mark of the first quarter, the Lions of Westminster led just 5-2.  At that point, Westminster got on a roll, scoring six unanswered in less than two minutes to force Oldsmar to take a timeout down 11-2.  However, the Lions continued with their stellar play and finished the quarter up 22-10.  The second quarter was much better for the Eagles of Oldsmar as they were able to stay even with the Lions.  At the break, the margin remained at twelve, 33-21.

Oldsmar tried a variety of defenses to get back into the contest in the third period.  However, the Eagles found it difficult to contain 6’9 senior Jaylen Carey and 6’6 sophomore D.J. Wimbley from getting to and scoring at the basket.  With one period left to play, Oldsmar was still down double-digits at 49-35.  At times in the fourth quarter, it looked like Oldsmar would make run to make the game competitive, but they eventually ran out of gas.  Westminster was able to increase its lead late to win by the score of 64-48.

Wimbley was named Player of the Game for Westminster with a game-high 29 points while Carey added 17.

For Oldsmar, 6’5 senior Braylon Jackson scored 17 points, earning Player of the Game honors for the Eagles.

Providence is one of the top teams in a very competitive Class 3A while St. Pete is starting to hit its stride and looking to make a run to Lakeland in 5A.

The teams swapped leads multiple times early in the first quarter and Providence led by just one, 6-5, with three minutes left to play.  At that point, the Stallions went on a 14-3 run to close out the quarter up 20-8.  St. Pete continued to struggle on the offensive end in the second quarter and Providence was quick to take advantage.  They nearly had the Green Devils doubled up at 30-16 with three minutes left until the break.  St. Pete didn’t let Providence get any further ahead and was down by fourteen, 37-23, at the half.

Providence maintained control and a double-digit lead for much of the third quarter.  However, down 44-28 midway thru the third, St. Pete got itself together and went on an 11-3 run to get the margin to nine at 48-39.  Providence was able to recover and led 51-41 with one period left to play.  In the fourth, Providence once again had a fourteen point lead, 59-45 with four minutes remaining and once again, St. Pete made a run, getting to within eight at 59-51 with 2:30 left to play.  However, time was now St. Pete’s opponent more than Providence, and the Green Devils just didn’t have enough of it.  The Stallions would go on to win by the score of 63-51.

Jaylen Robinson, a 6’6 junior scored 17 points for Providence and was named the Stallions’ Player of the Game for his efforts.  Brady Patterson, a 6’0 junior, added 11 points while 6’7 senior Mason Lee dropped in 10 points.

Tristan Gross of St. Pete earned his team’s Player of the Game designation with a team-high 18 points.  Sam Duckworth, a 6’1 senior, contributed 13 points and 5’9 freshman Emir Gainer finished with 11 points.

Sagemont was originally scheduled to play Winter Haven in a matchup of top ten teams regardless of class in the state but a scheduling issue with another team in the event forced a chance of plans.  Both teams are small school powers (Sagemont in 2A and FBA in 3A).  FBA has played a very challenging schedule to prepare for a rugged region three tournament for the right to go to Lakeland while Sagemont hasn’t lost to a Florida team all season while defeating some of the top teams in talent-rich South Florida.

In the first four minutes, it looked like Sagemont might make a mockery of the contest as it went up 11-2.  FBA kept coming and by the end of the first eight minutes, FBA was down just five at 18-13.  In the second quarter, Sagemont used its superior size to grow its lead.  The Lions went from up five, 24-19, midway thru the quarter to ten, 36-26, by the halftime break on the strength on strong inside play from 6’8 senior Danielius Kasparas and 6’6 junior Dominic Issa.

FBA came out strong in the third quarter, outscoring Sagemont 8-2 to make the score 38-34 with just over four minutes gone by, forcing a Sagemont timeout.  It didn’t help and with three minutes left to go in the quarter, FBA grabbed its first lead at 39-38.  Sagemont didn’t let FBA take complete control as was down just one, 43-42 going into the fourth quarter.  Sagemont was able to go on a 6-2 run early in the fourth quarter to re-take control of the game.  With time running down (less than a minute to go), FBA needed to foul to stop the clock and get the ball back.  However, they only had two team fouls at the time.  Sagemont realized this and did its best to spread out and move the ball before the fouls could take place.  Sagemont would ultimately go on to win by the score of 56-51.

Kasparas led Sagemont with 20 points and was named Player of the Game for the Lions.  6’4 senior Maxx Martinez added 17 points while 6’7 senior Tynan Becker contributed 12 points.

For First Baptist Academy, 6’3 senior Latrell Davis was absolutely spectacular in dropping a game-high 33 points.  As one might expect, he was named Player of the Game for FBA.  Adrian Rodriguez, a 6’4 junior, added 10 points.

OCP came into the contest with just one loss, a triple-OT one to Orlando Olympia.  TC didn’t have the sterling record of OCP because it has played an incredibly demanding schedule.  However, the Crusaders are coming off of a home win over Orlando Oak Ridge, one of the tope teams in 7A, and look to be hitting their stride.

It was a back and forth affair in the first quarter as OCP led just 7-6 with 3:30 left to play.  At that point, Tampa Catholic ripped off an 9-0 run.  Undeterred, OCP scored the last four points in the first quarter to make it a four-point game, 15-11. Tampa Catholic maintained control for the greater part of the second quarter and led 22-18 before calling timeout with 4:22 left until the break.  That may not have been the best idea as out of that timeout, OCP would go on a 9-3 run to close out the half up two, 27-25.

OCP stretched its lead in the third quarter, having seemingly gotten untracked on the offensive end.  After dealing with foul trouble in the first half, leading scorer Isaiah Brown, a 6’4 junior, was making his presence felt.  With one quarter left to play, OCP looked in control up 47-40.  The good times didn’t last for OCP.  Tampa Catholic outscored the Warriors 11-4 to tie the game at 51-51 with 4:45 to play.  TC went on to hold a four-point lead at 56-52 when OCP’s 6’0 junior Ameer Ramadan hit a three with one minute left to close the gap to one.  OCP was now forced to foul and sent 6’0 sophomore Isaiah Campbell-Finch to the line where he hit one of two.  However, OCP was unable to get a bucket to tie or take the lead on its last two possessions of the game.  Tampa Catholic came away with a big win, 57-55.

Karter Knox, a 6’6 junior was named Player of the Game for Tampa Catholic with 11 points but it was 6’3 senior Eddrin Bronson that led the Crusaders with 15 points.

For OCP, despite the foul trouble, Brown finished with a team-high 19 points and Player of the Game honors. Marc Angueki, a 6’6 junior, added 12 points while Ramadan finished with 11 points.

Originally, the plan was to have Winter Haven play Sagemont and Miami Christopher Columbus play Sacred Heart-Griffin.  However, on Friday, Columbus issued a notice that due to a “traumatic situation” on Thursday, the team was cancelling all activities for the next 48 hours.  At this time, we don’t know what the event was and aren’t about to speculate despite the various rumors that we have heard.  Instead of cancelling the contest, organizers were able to “re-shuffle the deck” and match up Winter Haven with Sacred Heart.

Sacred Heart returns everybody from last season’s Illinois Class 3A championship team and defeated a solid Miami Norland club here the previous evening.  The score was knotted at 8-8 after the first four minutes.  At that point Sacred Heart went on a 5-0 run and led by five after one quarter, 19-14.  Sacred Heart maintained a lead thru much of the second quarter until Winter Haven tied the score at 22-22 with 2:30 left until the break.  The Blue Devils of Winter Haven took a brief lead but a three by Sacred Heart just before the horn gave them at 26-25 advantage.

An 11-5 run by Winter Haven over the first few minutes of the third period gave the Blue Devils a 36-30 lead and forced a timeout by Sacred Heart.  The Winter Haven lead was seven, 39-32 with four minutes left in the period but then foul trouble sent 6’8 senior Dylan James and 6’6 junior Isaac Celiscar to the Winter Haven bench.  Sacred Heart was able to take advantage of their absence and drew to within one 42-41 with one quarter remaining.  Moving deep into the fourth quarter, the score was tied at 52-52 with 3:20 left to play.  Kjei Parker, a 6’1 senior for Winter Haven, hit a three to put them up three with 2:30 remaining.  That seemed to take the wind out of Sacred Heart’s sails.  They would score only one more point while Winter Haven extended its lead from the free throw line and win by the score of 62-53.

Parker was named Player of the Game for the Blue Devils with his team high 17 points.  Jamie Phillips, a 6’4 junior, finished with 16 points while Celiscar added 12 points and James contributed 10 points.

Sacred Heart-Griffin’s Player of the Game was 6’5 senior Zack Hawkinson as he scored 20 points.  Jake Hamilton, a 6’3 senior, tossed in 18 points for the Cyclones.

A bitter rivalry in Southwest Florida, the gym was pretty much standing room only for this one.  Port Charlotte won earlier in the season at home and the Tarpons of Charlotte were hoping to even the score.

It looked like that might happen easily as Charlotte got out to a 9-4 lead midway through the first quarter.  The Pirates of Port Charlotte were unfazed and by the end of the first period had tied the score at 11-11.  Port Charlotte assumed control of the contest in the second quarter.  While the Pirate lead was never more than one or two possessions, they never gave it up.  At the break, they had a three-point advantage, 23-20.

The Tarpons scored the first four points of the third quarter to take back the lead but it didn’t last as Port Charlotte hit a three.  At the mid-point of the period, the score was tied at 33-33.  Port Charlotte resumed control at that point and led 39-35 with one more period to play.  The Pirates started the final quarter hot and extended their lead to 47-38 with just over four minutes to play, forcing Charlotte to call a timeout.  The Tarpons were unable to get scores and stops to get back into he game and the Pirates would go on to win by the score of 56-47.

Bode Stewart, a 6’5 senior, led the Pirates with 22 points, earning Player of the Game honors.  Dallas Lambert, a 6’3 freshman and Caleb Campos, a 6’7 senior, each contributed 11 points.