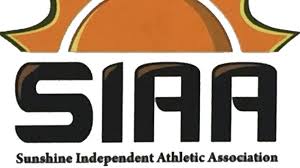 We headed to Daytona last night to catch some action in the Sunshine Independent Athletic Association between The Rock out of Gainesville and DME Academy.

The home team got out early in this one.  DME led 12-4 after the first three minutes of the nine-minute quarter that the SIAA plays under.  Half of those points came on a pair of threes from 6’3 senior Nigle Cook.  The Rock kept it even for the next three minutes but 6’8 junior R.J. Jones, the Lions’ tallest and most talented player, picked up his second foul at the 3:49 mark of the quarter and headed to the bench.  DME took advantage of this and finished the first quarter up eleven at 19-8.

The Rock continued to have trouble putting the ball in the basket in the early stages of the second quarter.  DME increased its lead to 27-11 after an 8-3 run, forcing a timeout from The Rock with 6:36 left in the period.  The break in the action didn’t slow down the momentum for DME at either end of the floor.  Jones picked up his third foul a bit later and again headed to the bench.  DME had little trouble adding to their lead and held a commanding 44-22 lead at the half.

The third quarter began with a feeling of anticipation that The Rock would cut into the deficit over the course of the next nine minutes and the game would become more competitive.  Every time the Lions looked to be making a run, DME had an answer.  On the bright side, The Rock stayed even with DME for the period and didn’t allow them to grow their lead.  On the other hand, that meant that The Rock was still down by a large amount, 58-36, going into the final period of play.

At one point midway through the fourth quarter, it looked like the Lions would make a game of it.  Down sixteen with the ball, a turnover resulted in a three for DME.  The Rock never really recovered from that blow.  DME would hold serve at home, winning comfortably by the score of 77-58.

Ten of the twelve players listed in the DME scorebook notched points in the contest.  Alvaro Fogueires, a 6’9 senior led DME with 13 points.  Cook added 11 points while Okojie Baraka, a 6’3 junior and 6’8 senior Maor Nekrashevich dropped in ten points each.

For The Rock, Jones and 6’5 sophomore Austin Leslie each connected for 13 points while 6’5 senior Dallas Jones added 10 points.

In a way, this game was a basketball version of the hit 1980s comedy “Trading Places” starring Eddie Murphy and Dan Akroyd of Saturday Night Live fame.  The “Basketball Gods” have apparently made a bet and threw misfortune the way of the “blue blood” while giving a program that was under-the-radar a shot at prominence.

The Rock entered this season with great expectations based on their SIAA state championship from last season and the plethora of players returning.  They were easily considered one of the top three teams in the state and deservedly were pre-season ranked in the Fab 50 by Ball is Life.

Then the complications came.

The top back-up guard and back-up big each decided to transfer out, as did another rotation player.  This sapped one of the team’s strengths: depth.  When over the Christmas break, 6’8 junior Sammie Yeanay decided to return to North Marion for reasons unknown, the biggest blow of all landed.  With the loss of four players expected to contribute heavily, the chemistry of the team seems to have been affected and the players have yet to respond to the new roles they must take on if they want to achieve success.

Conversely, DME has had what may be a breakout season for the program.  In the last National Top Ten poll put out by Max Preps, DME was ranked tenth, ahead of more notable programs such as Oak Hill or Legacy Early College, both out of the NIBC.  In watching them play, their individual talent and/or athleticism doesn’t stand out but their connectedness at both ends of the floor certainly does.  A talented team playing as individuals will not likely beat DME.

Hopefully, DME will continue this string of success, not just for this season but into the future.  We also hope The Rock can finish the season strong to alleviate some of the bitter taste that has been experienced to date.