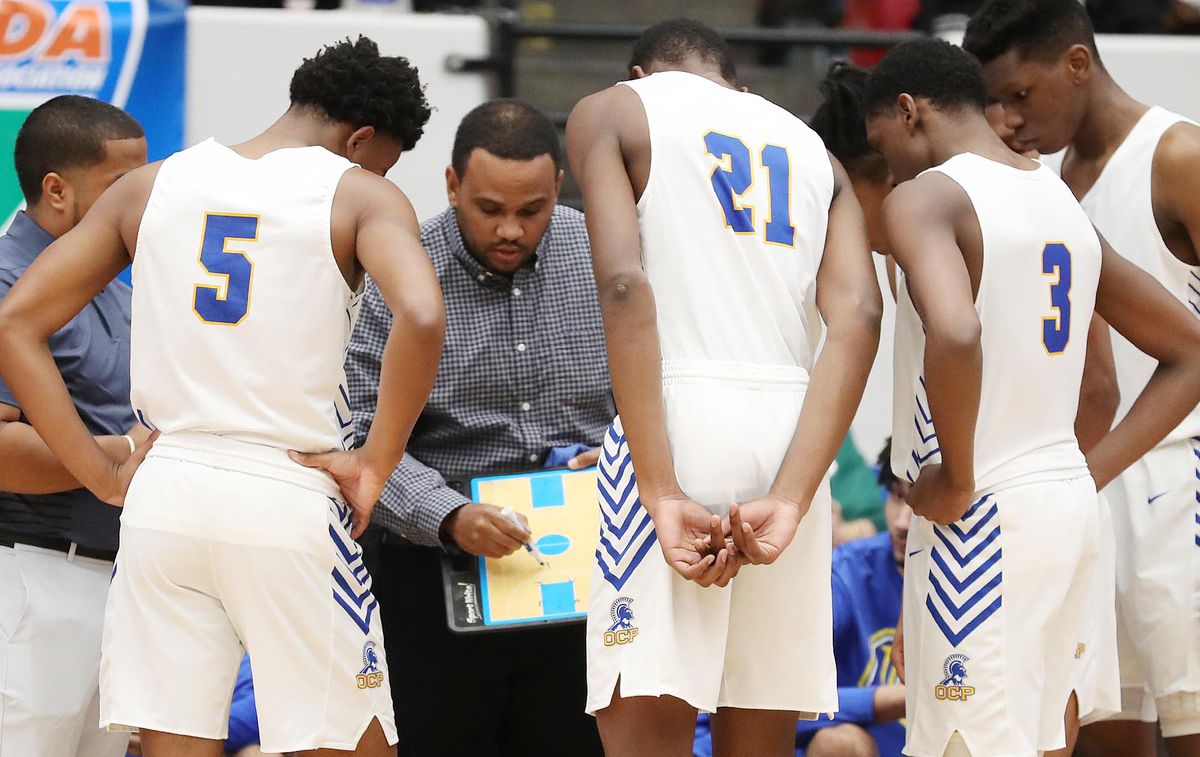 We braved the coldest day of the year and trekked over to Orlando Christian Prep to catch The Invitational, a three-game event presented by Access TV.  Three of the best teams in Orlando: Windermere, Oak Ridge, and Orlando Christian Prep took on a trio of standout teams from outside of Central Florida: Bradenton Southeast, St. Pete HS, and Ocala Trinity Catholic.

Fun Fact for Today: Bradenton Southeast has more Mr. Basketball winners than any other high school.  From 1990 to 2001, the Seminoles had three separate players received the award.

They way the game started off for Southeast, they certainly could have used one (or more) of those guys.  Windermere roared out of the gate quickly and led by the score of 17-4 after one period of play.  To give it some perspective, Windermere’s Sean Stewart, a 6’8 junior and Duke commit, had more blocks in the first quarter (3), than Southeast had field goals (2).

Southeast had a better time of things in the second quarter.  The Seminoles cut the deficit to eleven, 22-11 with two minutes gone in the quarter and the Wolverines felt a need to call a timeout.  Southeast seemed to find their rhythm from the perimeter and while Windermere never lost the lead, Southeast did slice the margin to single digits.  At the break, Windermere led by just eight, 34-26.

Southeast continued to whack away at Windermere’s lead in the third period and with just under four minutes to play, the score was 40-36 in favor of the Wolverines.  They responded with a 4-0 spurt to go back up by eight, but the Seminoles ended the period on a 5-0 run of their own to make the score 44-41 in favor of Windermere.

Southeast finally grabbed a 47-46 lead with 5:30 left in the contest.  At that point, Windermere seemed to awake from their slumber, reeling of seven unanswered points.  From there, things got very interesting down the stretch.  With only thirty seconds left to play and Windermere up 58-53, Southeast hit a three to make it a two-point game.  Southeast was forced to foul and Windermere hit both free throws to make it a 60-56 game with 14.5 second left.  The Seminoles launched a three with three seconds left and the ref called a foul, giving Southeast three free throws.  Southeast made the first two but missed the last one.  They fouled Windermere immediately.  The Wolverines hit one of two but with only 1.3 second left, there wasn’t enough time to get a good shot.  Windermere held on for a 61-58 win.

No excuses but St. Pete came in short-handed as they were missing their starting point guard to the concussion protocol and also without senior standout Derrick Mitchell due to a bum ankle.  Still, it was a bit of a surprise as to how fast the Pioneers of Oak Ridge blitzed out front to start the contest.  Seemingly playing with a “shot in seven seconds or less” mentality, Oak Ridge pushed the tempo at every opportunity.  And it was working.  After one quarter, the Pioneers had doubled up St. Pete 24-12.

The second quarter was even faster.  The Green Devils of St. Pete got going a bit too fast for themselves and Oak Ridge was more than happy to take advantage.  The Pioneers outscored St. Pete 28-12 in the quarter, twenty of those points coming in the last four minutes.  At the break, which St. Pete desperately needed, Oak Ridge was up 52-24.

The third quarter was better for St. Pete.  The Green Devils at least stayed even with Oak Ridge in the period.  However, the deficit was still large, 74-47, going into the final period.

With four minutes left in the fourth, St. Pete had cut the margin below twenty, 78-60, with four minutes left to play.  At one point after that, the Green Devils had a chance to cut it to twelve.  However, they couldn’t convert the free throws and the Pioneers were able to salt the game away from there.  Oak Ridge would win by the score of 83-66.

Oak Ridge got 20 points from Tyler Johnson while Fabio Basilli was right behind with 19 points.  Elijah Elliott tossed in 14 points while Jayden Reece added 11 ponts.

Both teams have legitimate state title aspirations in their respective classes (OCP is 2A and TC is 3A).  As expected, we got a highly competitive game from start to finish.  Though the Celtics of Trinity were the visitor, they were also the aggressor in the first quarter.  Trinity Catholic got the lead early and while their advantage was never more than a bucket or two, OCP was unable to make a run a take a lead in the first eight minutes as the score was 11-8 going into the second quarter.

OCP scored the first four points of the second to grab their first lead of the contest.  That was part of an overall 10-0 run by the Warriors to give them some breathing room.  It looked for awhile like OCP might put the game out of reach by the break, but the tide quickly turned in the Celtics’ favor.  They got on a run of their own and by the halftime horn sounded it was only a four-point game at 22-18.

For much of the third period, OCP would hold off any run that Trinity Catholic made at taking a lead.  Finally, with 1:30 left in the quarter, the Celtics tied the score at 31-31.  They also scored the last basket of the quarter and now led by two, 33-31, with one more quarter to play.

Trinity led by two, 38-36 with four minutes left.  At that point, the Celtics attempted to run time off the clock.  OCP was able to finally get the ball back and when they did, senior Ven-Allen Lubin converted a three-point play with 1:45 left to put OCP up by one, 39-38.  Trinity Catholic didn’t panic.  In fact, they struck back quite quickly as senior L.J. Pugh knocked down a three to return the lead to Trinity with 1:17 left to play.  OCP got a stick back from junior Jayden Hastings to tie the game at 41-41 with 1:05 left.  The Celtics worked the ball around for a good shot, but an errant pass was picked off by OCP’s Isaiah Brown and taken the other way for a score.  Now Trinity was down a bucket with forty-five seconds left.  The Celtics got a good look but the shot was off-target.  Brown grabbed the rebound and was fouled with ten seconds left.  He converted both for a four-point Warrior lead.  Trinity was unable to get a final shot to go down and OCP held on at home for a 45-41 win.

OCP was led by senior A.J. Brown with 13 points while Lubin added 11 points.

Trinity was paced by Pugh with 12 points, all on threes in the second half.