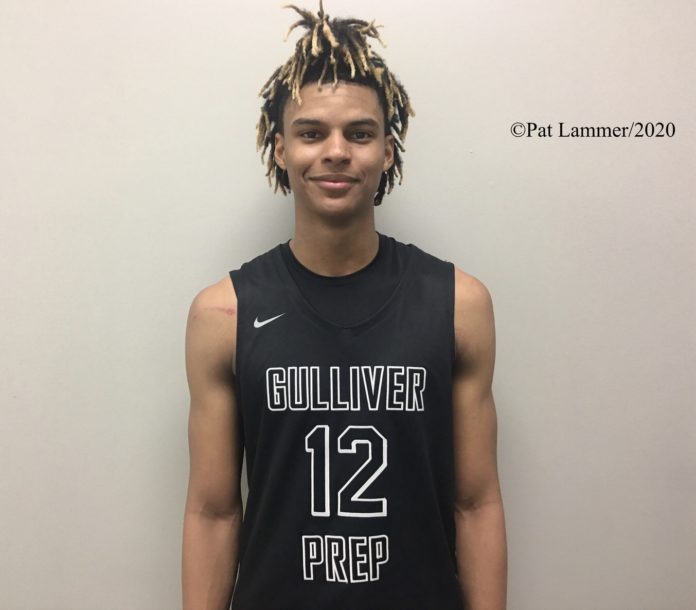 Tony Sanders Jr., one of the top senior prospects in Miami-Dade County, committed to Notre Dame on Friday.

Sanders, whose other scholarship offers included Dayton, Florida State, Georgia and Xavier, said he picked the Fighting Irish over Dayton.

Asked what pushed Notre Dame over the top, Sanders said: “The education piece on it and also the basketball piece. It reminded me of the academic side of Gulliver Prep.”

Sanders committed during the current NCAA dead period without having visited Notre Dame. He picked up a scholarship offer from the Fighting Irish this week and said he has learned more and more about the university and its facilities through the app, Zoom.

“They’ve been recruiting me since Christmas,” Sanders said. “I just feel like it was the right move.”

Sanders played travel basketball with Game Elite Florida. Coach Russell Powell talked about the type of player Notre Dame would be getting.

“He’s a versatile player that can play multiple positions offensively and defensively,” Powell said. “He can score on all three levels. Notre Dame is getting a high-character kid that loves to work hard not just in basketball, but in all aspects of life. His parents did an amazing job raising a very high-character kid.”

I was in Boca Raton for Gulliver Prep’s showdown with eventual state champion St. Andrew’s in January. Sanders excels in the spotlight.

Sanders went for 23 points against the Scots on 9-of-13 shooting from the field. He drilled three 3-pointers and added 8 rebounds on the night.

Asked where Notre Dame sees him on the court, Sanders said,” They see me as a basketball player and a person who can help in a tremendous way.”