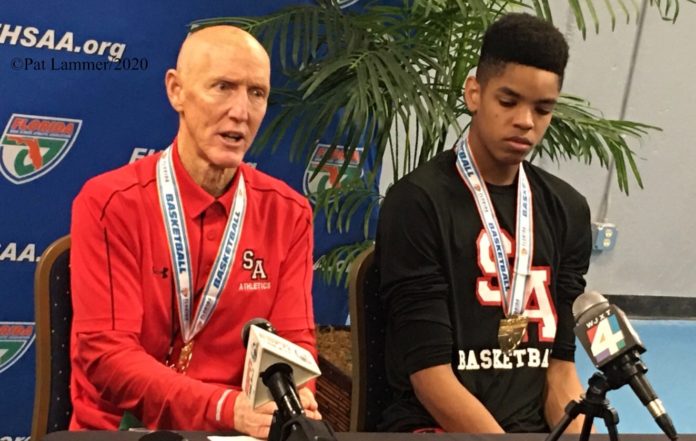 Oklahoma, out of the Big 12 Conference, is the latest Division I program to offer Boca St. Andrew’s junior forward Josh Minott.

The Sooners offered the 6-foot-8 Minott a scholarship during a conference call Monday night. He averaged 17.2 points, 7.4 rebounds and 2 steals in helping the Scots (26-5) to the FHSAA Class 3A state championship in March.

Minott is one of the top prospects in the state in the 2021 class. He brings nice size, is athletic on the break, finishes at the rim and can step out and hit 3s. Minott also teamed with Yale recruit Yussif Basa-Ama to provide defense and leadership.

Dayton, FAU, FGCU, Rice and Stetson are among the other programs who have offered Minott. He told me at the state tournament that Baylor and Georgia Tech had begun to show interest. Georgia, Memphis, UCF, Wake Forest and West Virginia have also been in touch, Minott said by direct message.

Asked what the college coaches say they like about his play, Minott said: “They say the really like my game, the facilitation despite the height. They really like my guard skills, the ability to score.”

Minott scored 13 points on 5-of-8 shooting from the field in the 57-50 state championship victory over Jacksonville Andrew Jackson in Lakeland.

He posted a double-double (19 points, 10 rebounds) in a 68-58 win over Hollywood Chaminade-Madonna in the state semifinals.

He says his priority this summer is to hit the weight room and put on size.