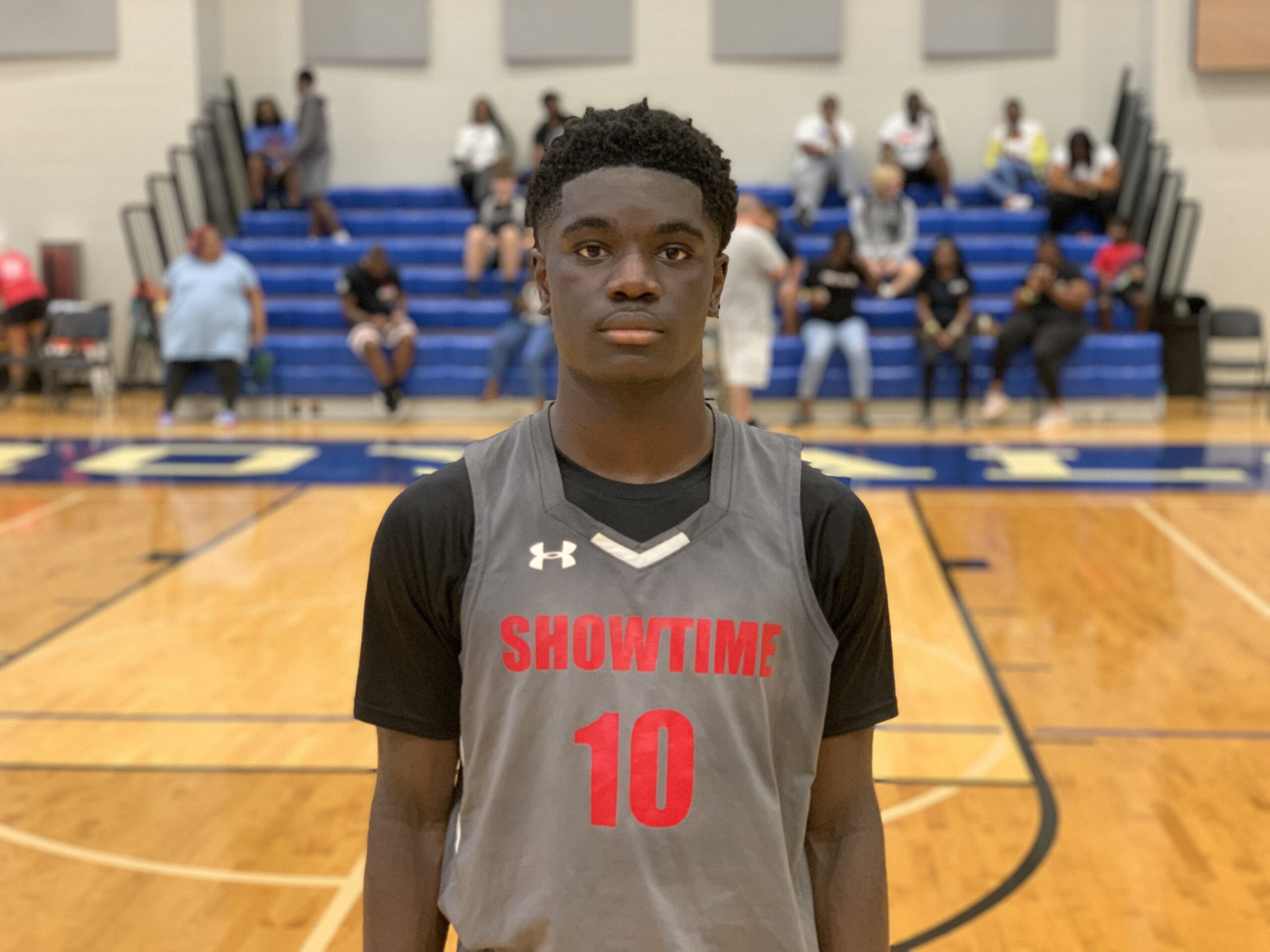 Chris Arias, SE Elite 3SSB 2023 – A 6’5 rising junior at Providence in Jacksonville, Arias has had a very good spring and summer and he continued that solid play at the Summer Showcase.  He has the ball-handling and passing skills to lead a team from the point guard spot.  Arias scores well on both drives and perimeter shots.  He is a reliable three point threat and scores well at the rim with either hand in a crowd.  Long and quick on the defensive end, he puts in great effort guarding the basketball and shows good instincts to disrupt the passing lanes.

Omar Adegbola, CP 25 Adidas Gold – A 6’5 rising senior in the Montverde CBD program, Adegbola was very productive in the team’s Sunday afternoon contest.  A solidly built wing, he got most of his work done inside the three-point arc.  Adegobla has a strong frame and uses it well to score on drives and out-battle bigger opponents for offensive rebounds and putback points.  He is quick to run the floor and finish above the rim in transition.  Active on the defensive end, Adegbola creates a lot of chaos with his quickness in jumping the passing lanes, alertly helping out from the weak side, and using his strength to bump cutters and keep drivers out of the lane.

Quentin Wimbush, CP 25 SWFL 2023 – A rising senior at North Fort Myers, Wimbush was one of the better perimeter shooters at the event.  He has a quick release and rare is the close out that gets to him in time. Wimbush is also quite deadly from deep when pulling up off the dribble.  While he had a couple scores off the bounce, its clear that he scores best from the perimeter.  Wimbush had a couple of nice passes on drives and really got after the ball coming off the offensive glass.  With his length and lateral quickness, he has the physical tools to be a solid defender.

Gavin Dunn, Showtime Ballers – A 6’4 rising junior at West Oaks Academy in Orlando, Dunn pulled double-duty this past weekend playing for both the 17U and 16U teams.  Regardless of the level of competition, Dunn produced.  Thriving in the up-tempo that Showtime plays at, Dunn uses his athleticism to great effect with attacking the basket in transition.   With excellent body control he makes shots from tough angles.  Dunn is effective as a straight-line driver in the half-court, and his jumper, both from mid-range and behind the arc, has improved to the point he must be respected.  He plays aggressively on the defensive end, hounding the basketball and looking to trap at every opportunity.

Jordin Bell, Showtime Ballers – A 6’1 rising junior out of Brooks-DeBartolo in Tampa, Bell impressed us at the FABC team camp last month and was just as solid this past weekend.  He is quite quick to the basket going in either direction, showed off a reliable floater in the lane, and has a knack for drawing fouls and converting at the free throw line.  While his perimeter shot wasn’t falling, Bell has good mechanics on the shot so it should get more consistent over time.  Defensively, he compensates for a lack of strength with activity and anticipation.

Caleb Williams, SE Elite 3SSB 2025 – A 6’3 rising junior from Riverview Sumner near Tampa, Williams was solid all weekend long.  He scored well going to the basket, made some good passes on the move that resulted in assists and was active defensively.  His perimeter shot is quickly becoming more of a weapon.  Williams looks to initiate the action at both ends of the floor.  He also rebounds actively and is quick to push the pace once he secures the ball.

D.J. Sandi, OTWT – A 6’0 rising freshman that is slated to attend Fort Lauderdale St. Thomas Aquinas, Sandi was a key component for both the 16U and 17U programs this past weekend.  Solid with the basketball and playing with an aggressive mindset, Sandi looked to get into the lane and collapse the defense at every opportunity.  When he did so, he made good shot vs. pass decisions and frequently found himself at the foul line.  Sandi may have had his greatest impact on the defensive end.  He did an excellent job of containing the basketball and really frustrated opponents to the point they had to be taken out of the game to calm down.

Forest Dudley, Showtime Ballers 15U – A 5’10 incoming freshman at Crossroad Academy in Quincy, Dudley looks to make an impact quickly on the high school level.  Strong with the ball and quick to the cup, he scores well in a crowd around the basket.  Dudley is in the process of extending the range on his jumper but he did manage to knock down enough threes to keep the defense honest.  He arguably saved his best game for last as on Sunday afternoon he led the team to a win, scoring a game-high 26 points.