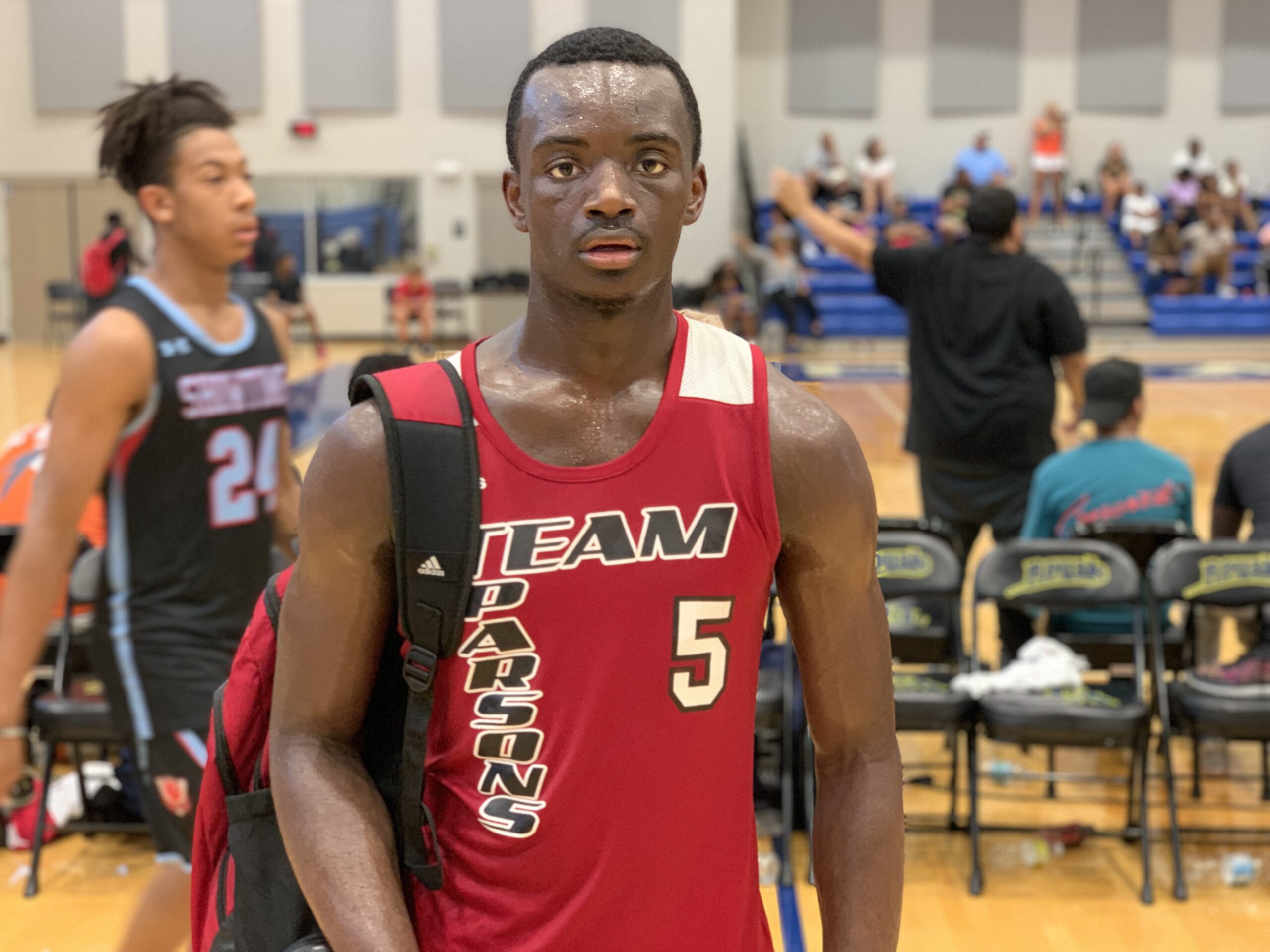 Chris Mubiru, Showtime Ballers – The 6’5 rising senior wing from West Oaks Academy in Orlando is just now getting back into form after dealing with an injury for the majority of the spring and summer.  Because of that, his usually reliable perimeter shot showed some rust, but, Mubiru found other ways to make an impact on the game.  Mubiru was exceedingly active on the offensive glass as he routinely outbattled bigger players and produced points as a result.  He also showcased his ability as a facilitator, either getting the ball quickly to open shooters on the perimeter or quickly pushing the ball up the floor via the pass or the dribble to ignite the transition game.

Aramys Rodriguez, 352 Soldiers – A 6’3 rising junior out of Dunnellon, Rodriguez was one of the breakout players of the event.  A solidly built point guard, what he might lack in quickness he more than makes up for with moxie, court vision, and an ability to creatively distribute the basketball.  He is a strong driver and finisher at the basket, makes good pass vs. shot decisions on the move, and rebounds well at both ends for his size.  Rodriguez has good form on his perimeter shot but it wasn’t falling this weekend.  No doubt he will get some recruiting attention after his performance this weekend.

Jackson Outlaw, Legacy/A2 – A 6’8 rising senior at Orlando Olympia, the long and athletic Outlaw looks like he may be turning the corner when it comes to putting his physical tools to good use.  Very quick off the floor, he tallied a bunch of rebounds and blocked shots in the pair of games we watched.  Outlaw moves up and down the floor very fast and doesn’t shy away from physical play in the lane.  His defense is certainly ahead of his offense at this time but he seemed more comfortable this weekend in making post moves against defenders attempting to push him off the block.  No doubt his best basketball is ahead of him.

Darius Livingston, SE Elite 3SSB 2025 – A 6’0 rising sophomore out of Wekiva in Orlando, Livingston looked the part of a D-I level recruit this weekend.  He shot the ball well from the perimeter, was quick to get by defenders and score at the basket, and found teammates for open shots whenever possible.  Defensively he moves his feet well, does a solid job of anticipating in the passing lanes, and is quick to help and recover from the weak side.  Livingston has great speed and quickness with the basketball and looks to push the pace at every opportunity.  There are several solid point guards emerging in Florida’s 2025 Class and Livingston is joining that select group.

Bryan Harris, Showtime Ballers – A 6’5 wing from Pensacola, Harris is making a compelling case to be one of the better wings in the Class of 2023.  He has the length, athleticism, and shooting ability from the perimeter that coaches now covet.  Harris is also a solid ball-handler and passer, getting the ball quickly to open teammates on the perimeter or when cutting to the basket.  He has the skills to be a grab-and-go rebounder, uses his length well on the defensive end, and can guard multiple positions.  Harris is also a good athlete, finishes well above the rim, and gets to and converts from the foul line at a high rate of frequency.

Calvin Liptrot, CP25 Adidas Gold 2024 – A 6’4 wing from Orlando Jones, the rising junior has developed into a dangerous perimeter shooter.  Whether it be a catch-and-shoot situation or rising up off the dribble, Liptrot knocks down shots with great regularity.  This opens up his drive game when defenders overplay him for the shot as he gets to the basket quickly and finishes with a soft touch.  Liptrot has a solid frame and puts it to good use when chasing after rebounds.  His ball-handling and passing skills continue to improve and he should be a catalyst for the Jones Tigers this coming season.

Kendrick Cela, RMF 300 – A 6’2 rising senior at Miam Monsignor Pace, Cela didn’t “wow” in any one phase of the game but rather came across as a “glue” guy that does a lot of little but important things that go into winning basketball games.  Though a bit undersized, Cela is a good athlete, successfully challenges bigger players, and puts out maximum effort every moment on the floor.  He showed off a reliable mid-range shot when catching the ball around the free throw area and a quick first step to the basket to score.  It is easy to appreciate how Cela goes about playing the game.