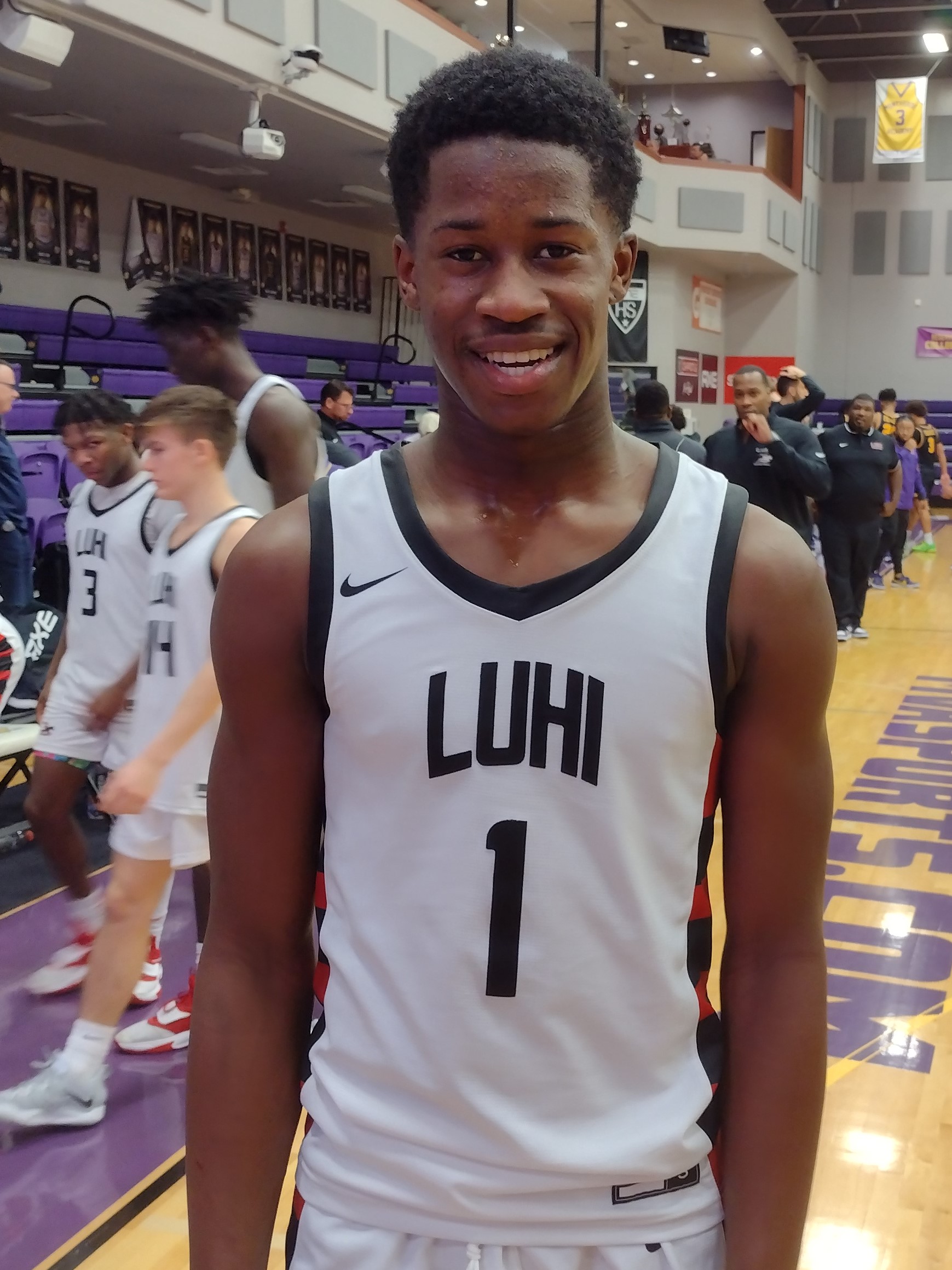 The nightcap of the NIBC Sunshine Classic pitted Long Island Lutheran out of New York against Legacy Early College from South Carolina.  Legacy is a charter member of the NIBC while Lutheran, or “Lu Hi” as they are often referred to, is in its first season in the league.

Legacy kicked off the scoring with a three from 6’8 senior Tyler Ringgold.  LuHi responded with a driving score from 6’10 senior Amdy Ndiaye.  Legacy kept a lead until V.J. Edgecombe, a 6’4 junior, scored in transition for LuHi to give them an 8-7 advantage.  Ringgold tied the score at 8-8 with a free throw but LuHi got three free throws from 5’11 senior Jayden Reid and a put back basket from 6’8 junior Ben Michaels to go up five, 13-8, with just over four minutes left in the period.  Legacy got back to within a point as Coen Carr, a 6’7 senior, threw down a violent slam in transition and 7’0 junior Daniel Jacobson scored inside with 1:24 left in the quarter.  LuHi then took control, scoring seven unanswered points as Michaels put back a miss, Reid drained a three and 6’8 senior Jayden Ross beat the buzzer with a dunk in transition to give LuHi a 20-12 lead.

The run for LuHi continued into the second quarter as Edgecombe hit a three and Reid scored on the break to make it a thirteen-point game, 25-12.  Legacy’s Carr threw down another menacing slam and this got the team going as 6’1 junior Elijah Crawford scored five straight points to get to within 25-19.  Edgecombe hit a three for LuHi which was partially offset by a dunk from Carr.  Edgecombe then scored on a cut to the goal and put in another three to push LuHi’s margin back to double-digits, 33-21, with just under two minutes left in the period.  Carr put back a miss for Legacy but both Edgecombe and 6’2 sophomore Kayden Mingo scored on the break.  A free throw from Legacy’s 6’2 senior Khalil Arnold made the half-time score 37-24 in favor of LuHi.

The third quarter provided little drama.  For every mini-run by Legacy to get the deficit down to ten, LuHi would string together a couple of baskets or free throws and get the margin back into the low teens.  With twenty-four seconds left in the third, Reid hit a three for LuHi to make the score 49-36, a thirteen-point margin that the quarter started with.  A late putback by Legacy’s Jacobson made it a 49-38 game with one more period to play.

Early in the fourth quarter it looked like Legacy would make a run.  Arnold hit a three and after LuHi got a bucket, Carr converted a three-point play.  Now with 6:10 left to play, Legacy was only down seven, 51-44, and it appeared to be anybody’s ball game.  That notion took a quick and quiet death as Edgecombe put back a miss for LuHi as did 6’0 senior Malachi Brown.  The margin was now back to double-digits at 55-44.  A pair of free throws from Arnold got Legacy back to within nine, but they would get no closer the rest of the way.  LuHi would go on to win comfortably, 73-59.

LuHi got a game-high 28 points from Edgecombe.  He also grabbed 12 rebounds and had 4 steals.  Reid scored 20 points.

For Legacy, Carr led the way with 14 points while Crawford, Ringgold, and Arnold each scored 11 points.