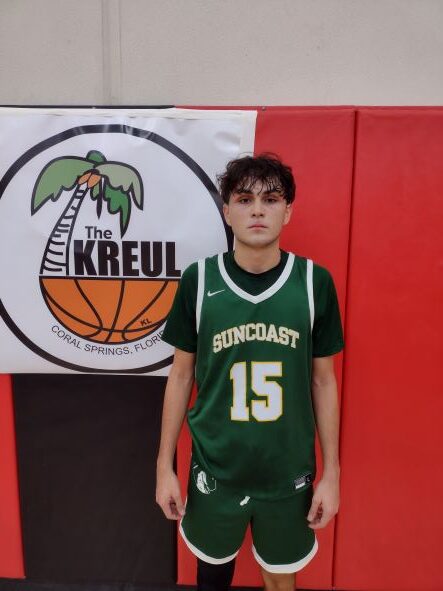 We took in the Saturday edition of the Kreul Showcase at Monarch High School in Coconut Creek this past weekend.  This five-game slate had some of the better public schools in Broward County taking on highly regarded programs from outside the area.  It turned out to be one of the better early season events in the state.

Game One: Hallandale vs. Ely

A matchup between two Broward County teams, we knew we would see two fiercely competitive teams go at it even if we knew little about the individual participants.  The Chargers of Hallandale dominated at the start, building a 10-2 lead with just over four minutes to play before an Ely timeout.  After that, the Tigers of Ely drew within two, 11-9, in the next two minutes.  Hallandale responded in a big way, going on a 10-3 run to end the first period up 21-12.

The pace slowed down a bit in the second quarter.  Ely decided to face-guard Hallandale’s 5’10 senior Anthony Lloyd and the Chargers didn’t handle it well.  The Tigers got to within five, 26-21 with three minutes left but the Chargers regrouped with an 8-0 run to go up by thirteen.  An Ely three just before the half-time horn made it a 34-24 ball game at the break.

Ely had the hot hand early in the third quarter as the Tigers were fueled by Hallandale turnovers and got to within 38-36, forcing a Hallandale timeout.  Midway through the period, Hallandale’s lead was only one, 41-40.  Ely took their first lead of the contest on its next possession but that didn’t last long.  The teams continued to go back and forth and at the end of the quarter Hallandale was back on top, 51-47.

Some fireworks took place early in the final period.  Apparently, an assistant coach for the Chargers used some not-suitable-for-work language regarding a foul call.  He didn’t back off, even after a warning by the officials, and was subsequently tossed from the game.  Ely was down 56-50 at this point and hit three of the four technical foul shots.  Ely then scored on its ensuing possession with a three to tie the game at 56-56 with 5:30 left to play.  Moving ahead with the score tied at 60-60 with four minutes left, Hallandale gets up by four, only to have Ely hit a three with 2:11 left to play.  Samir Norman, a 6’3 senior for Hallandale, scored inside to make the margin three at 66-63 with 1:26 to play.  The Tigers would get to within two at 67-65 with forty seconds left, but Hallandale would hold on from the free throw line to win by the score of 69-66.

We’d like to tell you who Ely’s double-figure scorers were but let’s just say the MaxPreps rosters for the team are incorrect and leave it at that.

Suncoast was ranked #1 in Class 5A to start the season and came in with an unblemished record.  The Chargers looked solid in jumping out to an 8-2 lead midway through the first period but Deerfield marched right back to within two with two minutes remaining.  Eventually, the Bucks and Chargers would head into the second quarter tied 14-14.

That period was tightly contested the lead changed hands on more than one occasion.  Deerfield’s deep bench, fresh players, and extended defensive pressure kept them in the game while Suncoast would make just enough shots to stay even.  Deerfield took its first lead at 22-20 with three minutes left in the period.  Neither team scored much the rest of the way and the Bucks led by three at the break, 24-21.

The third period saw great effort and hard, physical play on the court but not much to show for it on the scoreboard.  Suncoast made a late run and at the end of the quarter and the game was knotted at 34-34.

With four minutes remaining in the game, Suncoast led 47-46.  After a Deerfield free throw tied the game, Suncoast’s 6’2 junior Joseph Renna drained a three to give the Chargers the lead.  Suncoast got a stop at the other end and went back to Renna, who drained another three to give the Chargers a 53-47 lead with 2:48 to play, forcing a Deerfield timeout.  After a two-point basket by Deerfield and a free throw from Suncoast, Deerfield got a three to go down to make the score 54-52 with 1:26 to play.  Renna was fouled and made both free throws for Suncoast and after an empty Deerfield possession, Renna surprised the crowd with a baseline drive and score to put Suncoast up 58-52 with forty seconds left.  After another empty Deerfield possession, the Bucks were forced to foul.  That man Reena stepped up again, nailing both free throws and the lid on the Bucks’ coffin.  The Chargers would go on win by the score of 62-54.

Isaiah Horton, a 6’0 senior, led Suncoast with 17 points but Renna’s 15 points, all in the fourth quarter and all timely, were huge.  Ian Smikle, a 6’8 junior, added 14 points for the Chargers.

Jason Morris led Deerfield with 18 points while Joe Barksdale added 12 points and Jairon Speights finished with 10 points for the Bucks.

Both teams are highly regarded in their respective counties (Palm Beach and Broward) and both teams have legit title aspirations in Class 6A and 5A respectively.  However, play was a bit sloppy to start the game and Dwyer led just 5-4 midway through the first quarter.  Fortunes changed for the Dragons of Stranahan as the defense stiffened, holding the Panthers of Dwyer to just two points the rest of the period and taking a 10-7 lead.

Both teams struggled to get anything going offensively in the second quarter.  Dwyer regained the lead at 13-12 with just over five minutes to play and the score was tied at 22-22 with two minutes left until the break.  As in the first quarter, Stranahan was able to get on top and stay there to go up 26-24 at the half.

As one might expect, the third quarter was just as close as the previous two.  Stranahan made its charge first, hitting a three and getting some close-in buckets to go down to lead 36-30 with four minutes to go in the period.  Dwyer didn’t back down.  The Panthers outscored the Dragons 9-3 the rest of the period to make the score 39-39 all.

If you can believe it, the final quarter was even more intense. Dwyer hit a three to open the period but at the four-minute mark the score was tied at 49-49.  It looked like the Dragons would hold on for a “W” after a bucket inside gave them a 58-53 lead with 1:15 left to play.  Ten seconds later, Dwyer responded with a three from 6’4 senior Blake Wilson.  Dwyer played tough defense and tried to force a turnover and they did, scoring to tie the game at 58-58 with forty-five seconds left.  Stranahan looked to take the last shot and with thirteen seconds left drew a foul on a drive to the rim.  Stranahan made the first but missed the second.  Dwyer called a timeout to set up for the final shot.  The shot was off but Jalen Nelson, a 6’3 junior, got just enough fingertip and force on the ball to get it back up on the rim just before the horn sounded.  The ball rolled once around the rim and fell through, giving the Panthers of Dwyer a thrilling 60-59 win.

Last year’s 6A state champ Martin County came south and took on traditional Broward power Boyd Anderson.  The Tigers of Martin County stayed even with the Cobras thru the first four minutes as the score was only 7-6 in favor of BA.  The Tigers then did something unusual: they subbed out the first five and put in the second unit.  BA took full advantage and raced ahead to a 16-6 lead with 1:30 to go.  The Tigers’ starters came back in, but the damage was done and BA led 20-9 after one quarter.

BA apparently took its collective foot off the gas in the second quarter.  Midway through the period the Cobras’ lead was down to 27-20.  Elijah Duval, the Tigers 6’3 nationally-ranked junior, began to make an imprint on the game and created havoc on both ends of the court.  By the time the half-time horn sounded, BA still had a lead but it was now just three points at 36-33.

Boyd Anderson dominated the beginning of the third quarter, pushing its lead back to double-digits at 45-35 with 4:30 left in the period.  The Tigers didn’t fold and over the next 1:30 scored six straight to make it just a four-point game.  Both teams went cold at that point.  Martin County had the last shot of the period and made a three-pointer just before time expired.  Now it was anybody’s ball game with BA up just by one, 45-44.

Martin County grabbed its first lead early in the final period but couldn’t sustain the momentum.  BA used a 10-3 run to regain control with 4:44 left to play and up 55-49.  On top of that, the Cobra’s were in the bonus.  With each Tiger missed shot or miscue, they were forced to foul to get the ball back.  The Cobras would increase their lead at the foul line and win by eight, 75-67.

For Martin County, Duval led all scorers with 29 points.

The final game of the night pitted the Lake Worth Trojans, one of the better teams in Class 7A this season, taking on a re-loaded Pines Charter team.  The first quarter was a back-and-forth affair and neither team could gain any kind of advantage.  Pines Charter led by just one, 13-12, after the first eight minutes.

The second quarter was much the same.  It appeared that Lake Worth might gain a bit of advantage as they got into the bonus early in the period.  However, Pines Charter held firm and the Trojans were unable to make the most of that opportunity.  At the break, nothing had really been settled and the score was tied at 29-29.

The Trojans came out with extended defensive pressure and took advantage of its effect on Pines Charter.  Lake Worth had a seven-point lead at the midway point and led by ten, 46-36, with 1:20 left in the quarter.  A late three-point bucket by Pines Charter made the score 46-39 in favor of Lake Worth with one quarter left to play.

Pines Charter adjusted to the ramped-up Lake Worth defense and began to get back into the contest.  Lake Worth’s margin was only four points, 50-46, at the four-minute mark.  Things got even more interesting when Adrian Shackleton, a 6’3 junior for Pines Charter, knocked down a three to make the score 53-51 with 2:15 remaining, plenty of time for the Jaguars to finish the comeback.  However, Lake Worth scored six straight points to go up by the score of 59-51 with under a minute to go.  Pines Charter hit a three to get within five but that is the last points the Jaguars would score.  Lake Worth would score one more insurance bucket to win by the score of 61-54.

“Junior” Bartellus, a 6’5 junior for the Trojans, paced them in scoring with 15 points.  Calvin Sirmans, a 5’9 senior and Marvin Golf, a 6’5 senior, both scored 13 points and 6’7 junior Jeremy Innocent added 11 points.