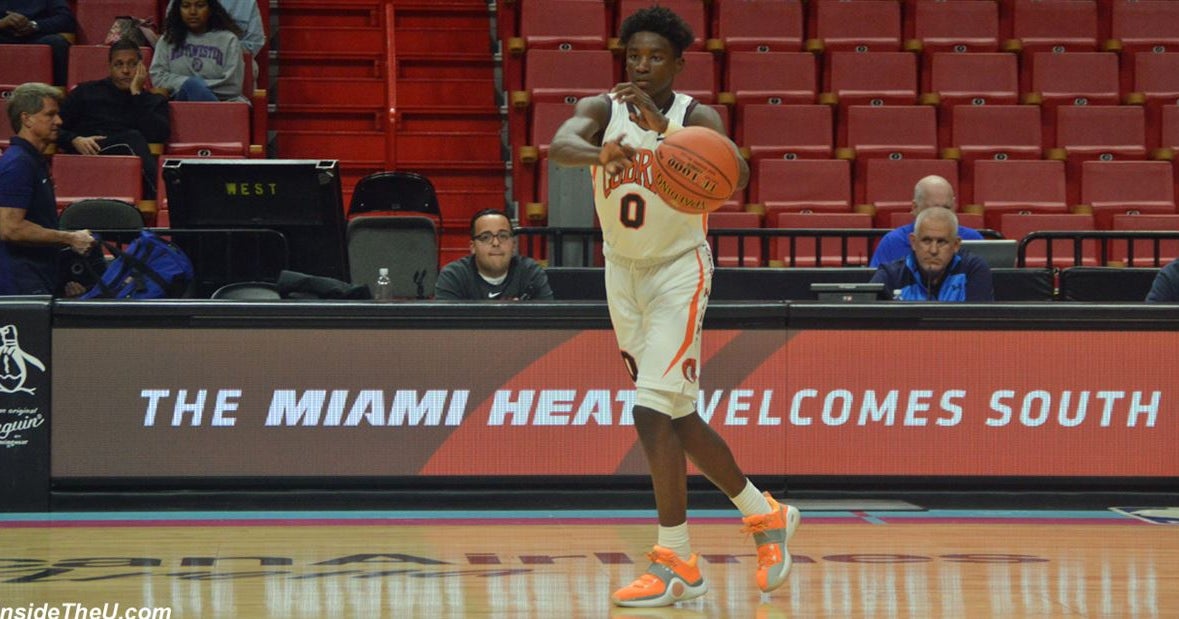 Photo Courtesy Inside The U

On the final day of the Montverde Academy Invitational, South Florida neighbors Westminster Academy of Fort Lauderdale and South Miami met up in the Seventh Place Game.  Both teams harbor state championship aspirations and neither wants to leave here 0-3.

The Cobras of South Miami got off to a good start as Brandon Sanders hit two free throws after being fouled inside on the games first possession and a bit later Nic Louis Jacques knocked down a three the make it 5-0 in favor of South Miami.  Westminster finally got things going with a mid-range jumper from Aiden Abell.  Chris Pujols then scored for the Cobras on a floater but a transition basket from Ben Middlebrooks and a long two from Abell made it a one point game at 7-6 in favor of the Cobras.  A bucket from Pujols was offset by a score from a put-back from Troy Boynton of Westminster.  A pair of free throws from Middlebrooks gave Westminster its first lead at 10-9.  Arturo Dean got the Cobras back in front with a drive and score but a driving score from Stephan Swenson of Westminster gave them back the lead to end the quarter up 12-11.

The second quarter continued as a back and forth affair. Pujols scored to open the period and give the lead back to South Miami by a point.  Swenson responded in kind for Westminster.  Pujols again scored but Kaleb Walters hit back to back buckets to give the Lions a three point 18-15 lead.  A three from Caleb Muller of Westminster then bumped their lead to six.  After Middlebrooks connected on a pair of free throws to make the score 23-15 in favor of Westminster, Louis-Jacques connected on a three stop the South Miami drought.  Walters scored on a drive and Middlebrooks hit two free throws to push the lead to nine at 27-18.  South Miami closed out the half with Louis Jacques hitting two of three free throws after being fouled, and Westminster took a 27-20 lead into the break.

Tavoris Miller of South Miami opened the scoring for the third quarter but Swenson of Westminster quickly replied with a driving bucket.  Pujols but back a rebound for the Cobras but Swenson stretched the Westminster lead with a three point play.  Boynton hit a three to give Westminster a double-digit lead at 35-24.  Louis Jacques countered that with a three of his own but a Walters score in transition made the score 37-27.  Sanders connected on a pair of free throws and after putting back a teammate’s miss, cutting the margin to six.  Muller responded with a three off of a long rebound for Westminster, but Dean scored in transition and Sanders threw down a lob to get back to within five at 40-35.  A three point play from Abell of Westminster pushed the margin back to eight to end the third quarter with the Lions up 43-35.

South Miami came out with full court pressure to start the fourth and it paid immediate dividends.  Dean scored in transition and then hit one of two free throws.  Muller got open for a three for Westminster but Louis Jacques answered with one of his own.  Dean again scored in transition for the Cobras and now it was just a three point game at 46-43.  Muller once again connected from deep to give Westminster more of a cushion.  South Miami wasn’t done as Louis Jacques hit two free throws and Dean Scored in transition.  When Louis Jacques hit a three after a Westminster turnover, South Miami had their first lead at 50-49 since early in the first.  Dean scored on a cut inside and Pujols scored in transition to boost the Cobras lead to five at 54-49.  Boynton of Westminster finally ended their dry spell with a bucket in transition, but Dean once again answered in transition.  Muller of Westminster was fouled attempting a three, and he connected on all three chances to draw within two at 56-54.  Dean hit a pair of free throws in response but after Walters scored on a putback and Middlebrooks hit two free throws after being fouled inside, the game was tied at 58 all with under one minute to play.  South Miami spread the floor, looking for a good shot.  Dean thought he had one on a drive but missed.  Fortunately for him, Miller was in the right place at the right time and put back the miss to give the Cobras a two point lead with fifteen seconds left. After a couple of time outs, Westminster had a couple of chances to put the game into overtime or win, but couldn’t get the ball to go down.  The Cobras come back for a big win by the score of 60-58.

For South Miami, Dean and Louis Jacques each scored 19 points while Pujols finished with 10 points.

Westminster’s Muller led with 15 points off the bench while Walters added 10 points and Middlebrooks finished with 10 points and 17 rebounds.