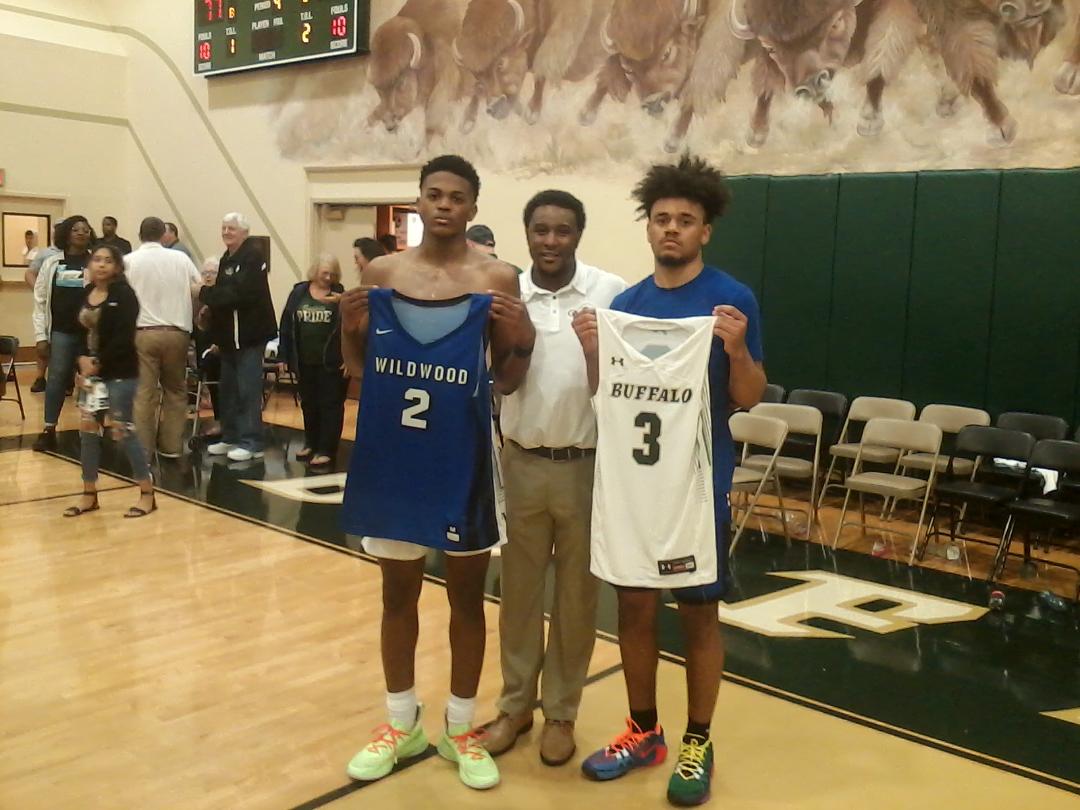 With the schools being but three miles from each other, this has become a major rivalry.  We got there with six minutes left in warmups and the gym was packed and people were being seated in the nearby cafeteria to watch the game on closed circuit TV.

Justice Robinson hit a three for Wildwood to open the scoring, but a three and a score inside by Ricardo Wright gave the host Buffalos a 5-3 lead a minute into the contest.  Robinson again hit a three for Wildwood.  The Villages then put together a spurt to lead 10-8 midway thru the period.  That spurt continued and the lead was up to 18-8 with just under a minute to play.  Marcus Niblack of Wildwood finally got on the board with a three to end the first quarter with the score 18-11 in favor of the host Buffalos.

The Buffalos stampeded to open the second quarter.  Thru the first four minutes, they outscored Wildwood 15-5, opening up a 33-16 advantage.  Wright had seven of those fifteen.  Wildwood finally slowed the Buffalos down but some serious damage was done.  At the break, The Villages had a double -digit lead at 38-22.

The pace slowed down for the first half of the third quarter as the teams managed a total of just eight points between them in the first four minutes.  At that point, Wildwood was trailing by thirteen at 40-27.  Wildwood amped up their defense and Niblack started to get rolling on the offensive end.  He scored sixteen points in the quarter, but even with that outburst, Wildwood was down ten, 51-41, heading into the final period.

Wildwood in general and Niblack in particular kept coming at the start of the fourth period.  They cut the margin in half with just under four minutes to play, making it anybody’s ball game.  With 2:30 left to play, Alfred Corbin drained two free throws to tie the score at fifty-six.  With thirty seconds to play, The Villages led by four, 62-58.  Niblack drew a foul shooting a three but only converted one of his three free throws.  Wildwood was forced to foul, and it worked as The Villages missed the front end of the one-and-one.  With two seconds left, Robinson of Wildwood drained a thee to tie the score at 62.  A desperation heave by The Villages wasn’t close and we headed to overtime.

In the OT, Niblack scored first for Wildwood but The Villages scored the next six points to lead 68-64.  Niblack converted a three point play to get within one but A.J. Williams responded with a three point play of his own for the Buffalo.  Wildwood would get no closer than those four points the rest of the way as The Villages would hold on to win by the score of 77-72.

Wright led The Villages with 34 points.  He’s always been considered one of the better perimeter shooters in the 2020 class but he displayed a keen ability to score off the dribble this night.  More important he was stellar from the free throw line, hitting 14 of 16 attempts.  At 6’4 and with good speed and quickness, he’s an ideal wing guard at the collegiate level.

Niblack led all scorers with 39 points, 36 of those coming after halftime.  Unsure why but he sat out much of the second quarter.  Out of the halftime break, he was in rare form, knocking down deep threes off the dribble, connecting on floaters in the lane, and essentially challenging the defense at every opportunity.  It was an impressive performance in a big-time environment.