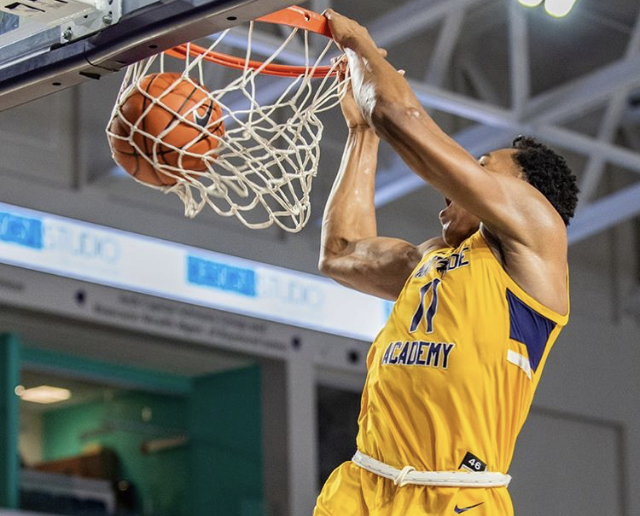 The consensus #1 team in the country, Montverde faces a national caliber team, Long Island Lutheran, in the finals of the Montverde Academy Invitational.  This will be the Eagles last game at home for the season and they finish out their regular season in a couple weeks at a tournament in Maryland.  The Eagles have thrashed nearly all of their opponents this year.  Any thing less tonight may disappoint a sell-out, standing room only crowd.

It only took three seconds for the fans to explode as Day’ron Sharpe knocked the opening tap to Cade Cunningham, who hit a streaking Scott Barnes for a dunk to get the Eagles off to a good start.  LuHi’s Andre Curebolo responded with a basket in the lane.  Sharpe hit a bucket inside for Montverde but Zed Key of the Crusaders notched a bucket inside to tie the game at four.  The Eagles then ripped off five straight points as Sharpe put back a miss and Caleb Houstan dropped in a three.  Key hit a surprise three for Lutheran to get them back to within two at 9-7, but Sharped dropped in a mid-range “J” to answer.  Key again scored for the Crusaders but A three from Moses Moody and another from Houstan pushed Montverde’s margin to eight at 17-9.  Kacper Klaczek scored on a drive for Lutheran, but Montverde closed out the quarter with seven straight points as Langston Love dropped a three and then a pair of free throws, followed by a bucket inside by Barnes.  After one quarter of play, the Eagles were soaring with a 24-11 lead.

A Dariq Whitehead mid-range jumper and two free throw from Zeb Jackson grew Montverde’s lead to sixteen at 28-11 with 5:30 to play in the second quarter.  Key converted a three point play for Lutheran to get them on the board.  A three from Love and a putback by Whitehead gave Montverde at nineteen point lead at 33-14.  Curebolo finally broke through for a score for Lutheran but a free throw from Barnes and a three from Moody pushed the margin over twenty at 37-16 with 2:30 left in the half.  Lutheran answered with a three from Paul Jordan but that was cancelled by a three from Houstan.  Lutheran scored the last points of the half on two free throws from Key, and the Eagles flew into the locker room at the break up 40-21.

The Eagles busted out an 8-0 run to start the third as Moody hit two threes and Sharp threw one down in transition to make the score 48-21 with 4:30 left in the quarter.  Klaczek hit a three for Lutheran to put them on the board and stop the bleeding but a free throw from Cunningham and another Sharp slam on the break continued the onslaught.  Curebolo knocked in two free throws for Lutheran but that was answered with a mid-range jumper from Whitehead and a score inside by Love.  Key made one of two free throws for Lutheran but Michael Wu came off the bench to hit a three and Love put back a miss for the Eagles.  Jayden Reid closed out the scoring for the quarter with a bucket before the buzzer to make the score 60-29 going into the final period.

With the margin at thirty-one, the final period was anti-climactic.  The Eagles put in their bench for most of the quarter and all but one player on the Montverde roster scored.  Lutheran was unable to make a dent in the margin because of the bench players for Monteverde’s success.  The Eagles ultimately win going away by the score of 83-47.

Love led the Eagles in scoring off the bench with 14 points, Whitehead and Moody each scored 12 points while Sharpe finished with 10 points.

Lutheran’s Key finished as the game’s high scorer with 19 points.