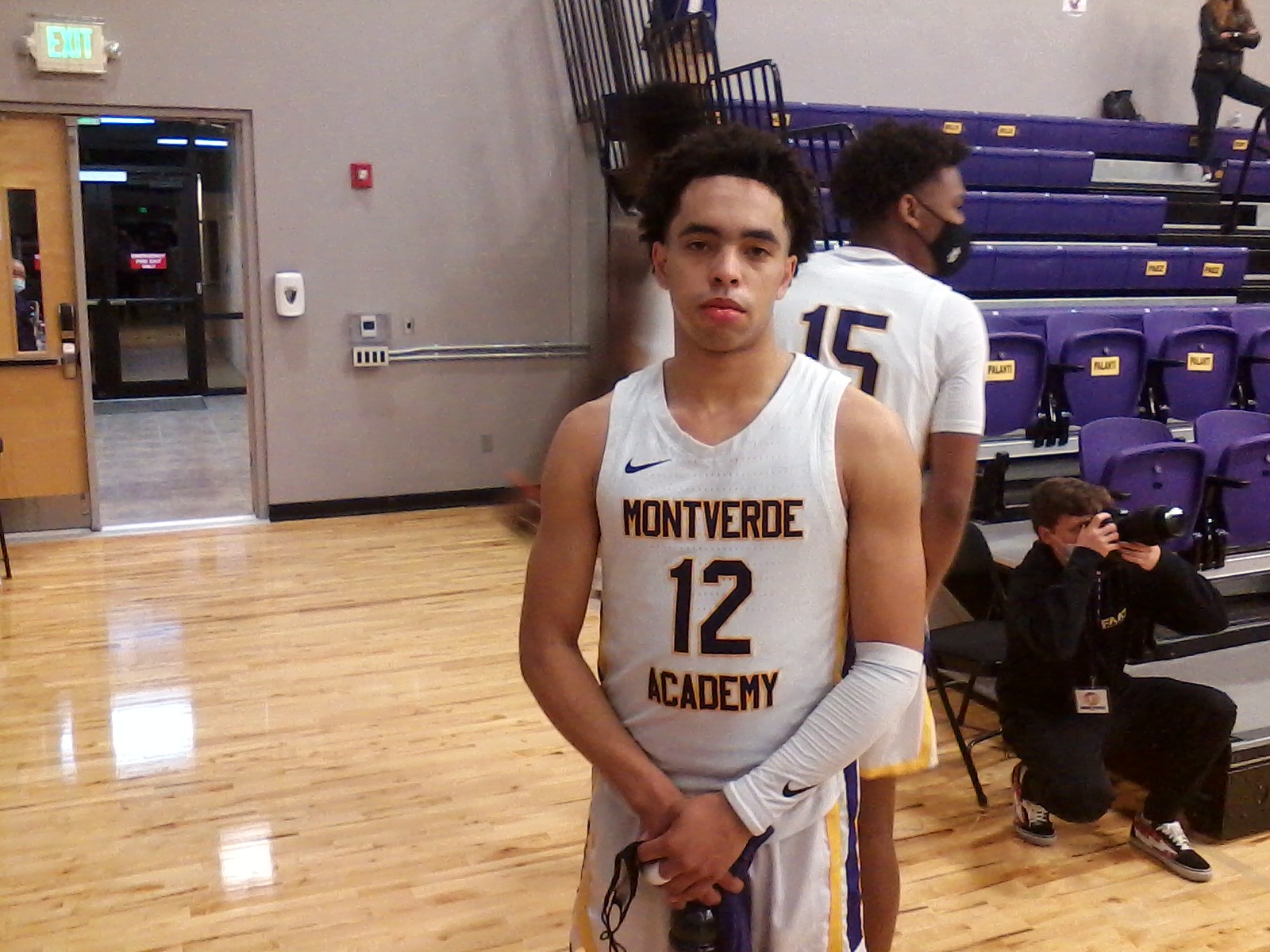 The final contest of Day One of the Montverde Academy Invitational Tournament features a pair of unbeaten powers.  The Eagles of Montverde Academy are the consensus #1 in the various national polls while Compass Prep, which is not recognized by a high school governing body and therefore is not eligible in the BallisLIfe Fab 50, is ranked #10 by Max Preps.  Currently, Montverde is on a 40-game win streak that extends from last season while Compass Prep is 15-0.  A very good team will get its first (maybe only) “L” of the season.

The Dragons of Compass grounded the Eagles early on.  Glenn Taylor was fouled on a three for Compass and hit all three free throws to start the game.  A bucket inside from Adrme Diongue and two free throws from DaRon Holmes gave Compass a 7-0 lead with four minutes to play in the quarter.  Caleb Houstan dropped a three to give Montverde its first points of the game.  Compass wasn’t done as Ty Ty Washington scored inside and Holmes had a steal and score to make it 11-3.  A bucket inside by Montverde’s Jalen Duren and a three-point play by Houstan brought Montverde to within three.  That 11- 8 score stood to the end of the first eight minutes.

Ryan Nembhard (pictured) scored on a drive to bring Montverde to within one on the first play of the second quarter.  Washington of Compass responded with a four-point run of his own to push the margin to five points.  Montverde then found its stride, going on a 10-4 run as Houstan hit two free throws and scored on a drive, Langston Love scored twice in the point and Justice Williams scored on a drive.  A three from Taylor of Compass was all the Dragons could muster and the Eagles had their first lead of the game at 20-19 with 4:26 to play in the period.  A long two by Washington returned the lead to Compass but a three from Love and a putback slam buy Duren gave the Eagles a four-point lead.  After two Compass free throws, a three from Houstan upped the margin to five at 28-23.  Two free throws from Holmes and a three from Josh Uduje of Compass tied the score at 28-28 but with two seconds remaining in the half Langston of Montverde was fouled.  He connected on both free throws and the Eagles took a meager 30-28 lead in to the halftime break.

Montverde came out hot to start the third quarter.  After a transition slam and floater in the lane by Dariq Whitehead, Houstan dropped in a layup and then two free throws to give Montverde a double-digit advantage at 38-28.  Compass responded with a three from Uduje and after a bucket inside from Love, Compass hit a three and got a put back to make the score 40-36 with just under four minutes to play in the third.  Love responded with a three and after a mid-range jumper from Diongue, Houstan hit another three for Montverde to push the lead back to eight at 46-38.  Compass responded with seven straight points as Uduje hit a three, Washington drilled a long two and then a drive to draw within one with five seconds left in the quarter.  Nembhard got past the defense and launched a long three just before the buzzer.  It dropped in, giving Montverde a 49-45 lead heading into the fourth quarter.

Whitehead hit a long jumper just before the shot clock expired on Montverde’s first possession of the period.  Compass responded with a pair of free throws from Washington and a three from Uduje to close within one at 51-50.  A technical was called on Whitehead after the play and Washington hit both free throws to give the Dragons a 52-51 lead.  Montverde tied the score with a free throw from Jalen Hood-Schifino put Compass grabbed the lead back on a stick back from Holmes.  On the next play, Montverde’s Nembhard drove to the basket and took a tumble, tweaking his ankle and exiting the game.  A three from Javon Small upped Compass’ advantage to five, 57-52 with just over four minutes remaining.  Love got a stickback for Montverde to draw within three and then Houstan hit a three to tie the score at 57-57 with just under two minutes to play in regulation.  Holmes hit two free throws for Compass and Nembhard re-entered the game.  Houstan connected on a mid-range jumper but with a minute to play Taylor scored inside to give Compass a 61-59 lead.  Montverde worked the ball inside to Duren and he was fouled.  He connected on both free throws to tie the score with thirty-four seconds left.  Montverde was able to force a shot clock violation on the next Compass possession and had a chance to win with four seconds left.  Nembhard got to the basket and got a shot to drop in a crowd, but the horn sounded just before he released the ball and we headed into overtime.

In the extra period, Nembhard put the Eagles on his back.  He scored the first six points of overtime and overall Montverde ran off nine straight points before a putback with under a minute to go gave Compass its first points of the OT.  Now time was the enemy of Compass and they had to foul.  Montverde connected on six consecutive free throws while continuing to make it tough for Compass to score.  In the end, the Eagles would fly off with a 76-65 victory to remain unbeaten on the season.

Houstan led Montverde with 21 points while Nembhard tossed in 19 points and Love finished with 18 points.

For Compass, Washington had 21 points while Uduje added 14 points and Holmes finished with 10 points.