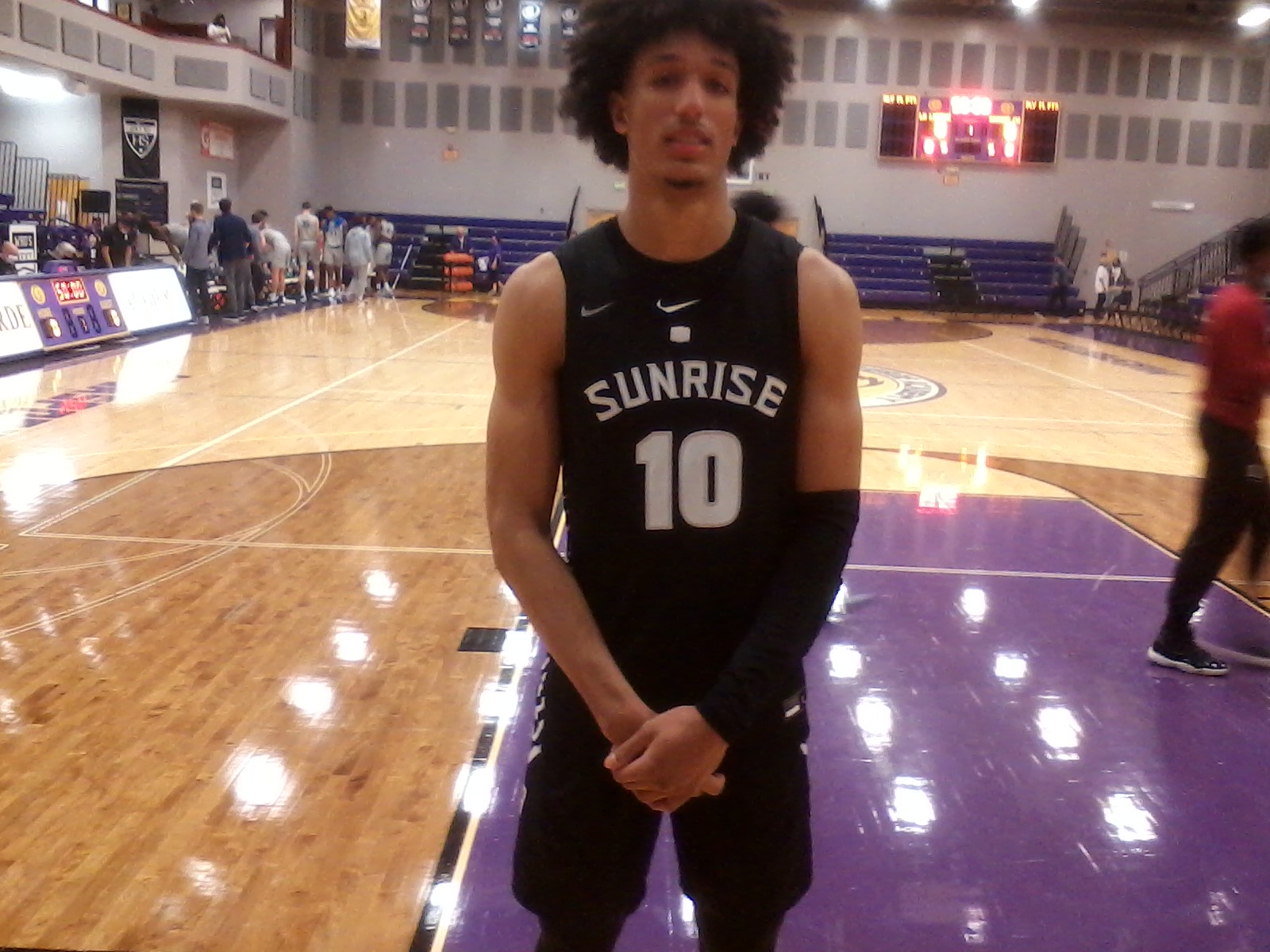 In Game Two, La Lumiere out of Indiana, ranked #11 in the BallisLife.com Fab 50, takes on the #2 ranked team in the country, Sunrise Christian out of Kansas.  Both teams are stocked with high-major D-I talent and have made recent appearances in the GEICO Nationals over the last few years.

Sunrise Christian struck first with a three-point play from Grady Dick.  La Lumiere responded on their next possession with a three from J.J. Starling to tie the game.  From there, Sunrise took off.  Dick hit a long two, Zach Clemence completed a drive and Kendall Brown (pictured) put back a miss.  La Lumiere called a timeout down 9-3 with 3:11 left in the first.  Chisom Okpara converted two free throws for La Lumiere but that didn’t stop the bleeding.  Brown threw down a lob, Kennedy Chandler tossed in a three and Jaylon McDaniels dropped in a free throw to make the score 15-5 with a minute left in the first.  Starling hit a floater for La Lumiere but a three from Willie Lightfoot of Sunrise gave them an 18-7 lead going into the second quarter.

It didn’t get any better for La Lumiere.  Back-to-back threes, one from Kenny Pohto and one from Dick built the lead to 24-7.  A three-point play from Okpara got La Lumiere back into the game but a steal and score from Brown and a transition basket from Pohto pushed the lead to 28-10 with six minutes left.  Starling got La Lumiere back on the board with a drive but Sunrise wasn’t done.  Grady scored on a drive and Chandler scored five points in a row to grow the Sunrise lead.  A three from Starling made the score 35-15 in favor of Sunrise with three minutes to go in the quarter.  Sunrise would stretch that margin by three by the end of the second quarter, up 43-20.

A 5-0 run by Sunrise to start the third period made things worse for La Lumiere.  A 7-1 run by La Lumiere, culminating with a three from Starling got the deficit down to 49-27 with 4:31 to play in the third.  However, that is as close as they would get.  Sunrise finished out the third period with a 13-7 run to make the score 62-34 with one period left to play.

La Lumiere score the first four points of the final period but a transition bucket from Brown and a three from Chandler pushed the Sunrise advantage to 67-38 with five minutes left.  La Lumiere made a bit of a run to make the score a bit more respectable but Sunrise won in a walkover 77-53.