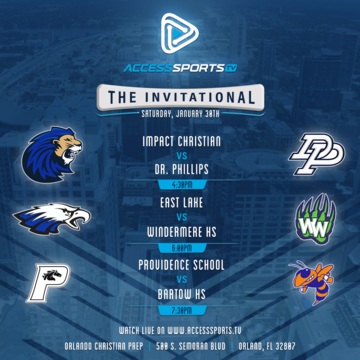 We took in The Invitational presented by AccessSports.TV held at Orlando Christian Prep this past Saturday.  While COVID may have impacted the initial field and nicked the event to three games, it was still a quality set of games featuring a high level of play from all six teams involved.

Both teams are highly regarded as one of the favorites to get to Lakeland in their respective classifications.  DP is the #2 ranked team in Class 7A, the state’s largest, while Impact plays in Class 2A and has taken on a very challenging schedule this season.

Dr. Phillips started strong with a 10-2 run in the first two minutes of the opening quarter.  Denzel Aberdeen and Riley Kugel each scored on drives to the rim and connected on a shot from behind the arc to give the Panthers the lead.  Impact took a timeout at that point and slowly climbed back into the game.  By the end of the first quarter, Impact had cut the deficit in half and trailed just 14-10.

In the second period, DP slowly grew its lead.  By the midway point, the Panthers had re-established the eight-point advantage they had let erode with the score standing at 25-17.  From that point on, DP outscored Impact 5-1 over the final four minutes of the second, establishing a 30-18 advantage.  Aberdeen scored nine points in that quarter, draining a trio of triples.

Dr. Philips continued its run to open the third quarter.  The Panthers outscored the Lions 15-8 during the first four minutes of the period, forcing Impact to call a time-out.  DP pushed that margin up to twenty at one point, but Impact rallied a bit, scoring the final five points of the third to trail by fifteen, 49-34, going into the final quarter.

Impact was able to keep DP from growing the lead in the first half of the fourth and the margin was still fifteen points, 57-42.  However, time was running out and Impact found it necessary to do things out of character, such as pressing, shooting threes, and fouling to get the ball back.  The Panthers took advantage and finished the game on a 12-4 run to win by a comfortable 69-46 score.

Arguably the marquee game of the night, both teams feature potent offenses fueled by high-scoring perimeter players.  The Eagles of East Lake came in with a record of 16-0 while averaging over 70 points a contest.  Windermere’s record wasn’t unblemished but their losses have to come some of the top-rated teams in the area.

East Lake got out on top early, 11-4, getting an unlikely seven quick points from Henry Hurst as Windermere was focusing on the East Lake trio of Anthony Bittar, Mikey Shane, and Dean Gabrelcik.  Windermere took an early timeout to adjust and the magic words must have been spoken as the Wolverines finished out the quarter on 9-3 run take a 16-14 lead.

Windermere kept a slim lead throughout the first half of the second quarter, leading by just two, 24-22, at the four-minute mark.  Windermere again finished the period strong, compiling a 7-2 run to lead by seven at the half, 31-24.  Kanye Jones had a big quarter, tallying eight points for Windermere.

Windermere’s run carried over into the third period.  The Wolverines lead reached double-digits, 38-26, midway through and East Lake took a timeout to get things back on track.  The timeout seemed to have its desired effect as East Lake pulled to within seven, 45-38, with one period left to play.

In the final quarter, it seemed like whatever East Lake tried to do to catch up, Windermere had a response.  Though East Lake was able to keep the lead from growing, the Eagles were also unable to get within one possession of tying the game or taking the lead.  A last second layup by East Lake made the final score 59-54 in favor of Windermere.  It was East Lake’s lowest scoring output of the year by eight points.

Jones led Windermere with 26 points, only three of those coming from deep.  Instead, he worked his magic inside the arc and at the free throw line.  He also tallied 7 rebounds and 3 assists.  Trey Moss tossed in 13 points and grabbed 7 rebounds.  Chris Nurse contributed 6 points and 8 rebounds, playing very tough on the interior.

Bittar led East Lake with 20 points.  He excelled at getting to the basket and scoring in traffic with either hand.  Hurst finished with 13 points, 5 rebounds and 3 assists, providing a major lift.  Gabrelcik scored 10 of his 13 points in the second half.  He also grabbed a team-high 8 rebounds.

Both teams have a championship pedigree, are well-coached, play hard, and don’t shy away from playing top-level competition.  That’s why they agreed to play The Invitational.

Surprisingly, both teams started the game a bit sluggish as the score was just 5-5 after the first four minutes of play.  Bartow woke up first, scoring the last seven points of the quarter to lead 12-5.  A pair of threes from Tyrone Smith got the Yellow Jackets going.

Providence clawed back in the early part of the second period.  The Stallions put tother a 7-1 run to get within one in just over two minutes.  Providence finally drew even with Bartow, 16-16, with four minutes remaining in the half.  At that point, the teams traded baskets and the lead until the half-time horn sounded.  When it did, Bartow led by a single point, 23-22.

A 6-0 run by Bartow at the beginning of the third built their lead and forced a timeout from Providence.  It didn’t have its desired effect and Bartow continued its run.  By the fou- minute mark, Bartow’s run was 13-2 and the Yellow Jackets led by the score of 36-24.  Providence rallied but couldn’t dent that twelve-point margin as the score was 42-30 heading into the final quarter.  To make matters worse, Providence’s force inside, J Lee Repass, fouled out in the third quarter.

The Stallions of Providence were able to reduce the deficit, getting within six, 44-38, with four minutes left to play.  However, Bartow was able to keep control and ultimately won by nine, 54-45.

Smith finished with 17 points for Bartow, going 5-9 from beyond the arc.  Amarion Frazier also contributed 17 points as well as 5 rebounds and 2 steals.  Walter Clayton, a Iona commit, only had 5 points, but put up 7 assists.