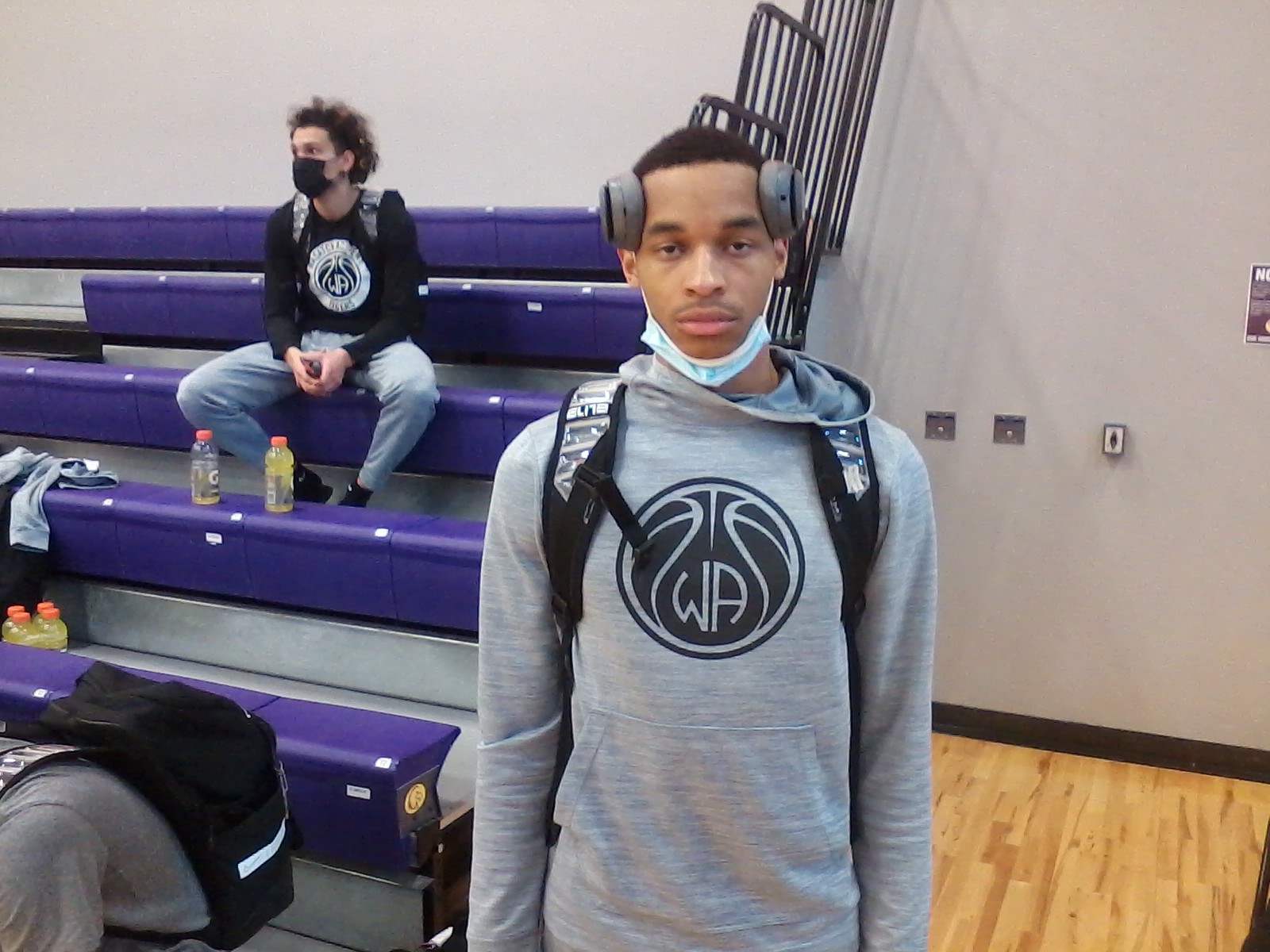 The first game of the Montverde Academy Invitational Tournament featured Oak Hill Academy, ranked #5 in the BallisLife.com Fab 50, taking on Wasatch Academy from Utah, who comes in ranked #6 in that same poll.  Oak Hill has been a power in the high school ranks for over three decades while Wasatch is somewhat new to the scene.  Both teams bring in a load of talent and the expectations are for a high-octane game that will be fast paced.

Wasatch got out of the gate fast as Robbie Armbrester slammed home a baseline drive and Nolan Hickman (pictured)  drained a three.  Manny Okitondo got Oak Hill on the board with a bucket inside but a pair of free throws from Roddy Gayle made the score 7-2 in favor of Wasatach 1:30 into the game.  Oak Hill drew within one as M.J. Rice scored in transition and Camryn Carter dropped in a mid-range jumper.  The teams would exchange buckets and with 4:39 left in the first, Wasatch led 12-10.  Wasatch then went on an 8-2 run starting with a dunk on the break from Armbrester and finishing with a transition basket from Keba Keita.  During this time, Oak Hill was only able to muster a bucket inside by Judah Egbo.  Rice got Oak Hill back on the board with a bucket inside but a transition basket by Brennan Rigsby and a free throw by Keita gave Wasatch a 23-14 advantage with thirty seconds left in the first period.  Caleb Foster score on a drive for Oak Hill just before the horn to make the score 23-16 going into the second period.

Foster of Oak Hill converted a three-point play to open the quarter and was answered with a driving score from Hickman.  Oak Hill scored to get within four at 25-21, but Wasatch put together another run to open a nine-point margin.  Hickman started it with another score at the rim and Fousseyni Traore ended the run with a putback.  With 4:40 left in the period, Wasatch led 33-24.  Not it was Oak Hill’s turn to make a run, outscoring Wasatch 9-2 as Carter scored in transition and put back a miss, Foster hit a floater in the lane and A.J. Williams dropped in a three.  With two minutes left in the half, Oak Hill was back to within two at 35-33.  Wasatch ended the run with a lob slam by Armbrester and when the half came to a close, Wasatch led by just three at 38-35.

Wasatch scored the firs three points of the third but a four-point play from Ricks made the score 41-39.  Wasatch again went on a run, a 12-2 run to take a 53-41 lead with 3:46 to play in the period.  Gayle had five points in the run, including a concussive slam in transition.  Oak Hill cut five points off that margin quickly with three from Carter and a bucket from Xavier Brown.  A three-point play by Traore stopped the run momentarily for Wasatch.  Oak Hill hit two free throws but a three pointer for Wasatch pushed the lead back to double-digits at 59-48 with two minutes remaining in the third.  Oak Hill responded with a small 4-0 burst but couldn’t sustain that momentum.  At the end of the third period, Wastach had a nine-point lead at 65-56.

Wasatch pulled away in the final period.  After a three-point play from Carter of Oak Hill and a pair of free throws from by Ricks sandwiched around a free throw from Traore of Wasatch, Oak Hill was within five at 66-61 with 6;26 to play.  From there, Wasatch slowly grew its lead back to double digits.  Oak Hill had to foul to get the ball back but Wasatch took care of business from the line.  Ultimately, Wasatch would win by ten, 84-74.

Wasatch was led by Hickman with 20 points while Gayle scored 18, Richard Isaacs had 13, Traore had 12 and Armbrester finished with 10 points.