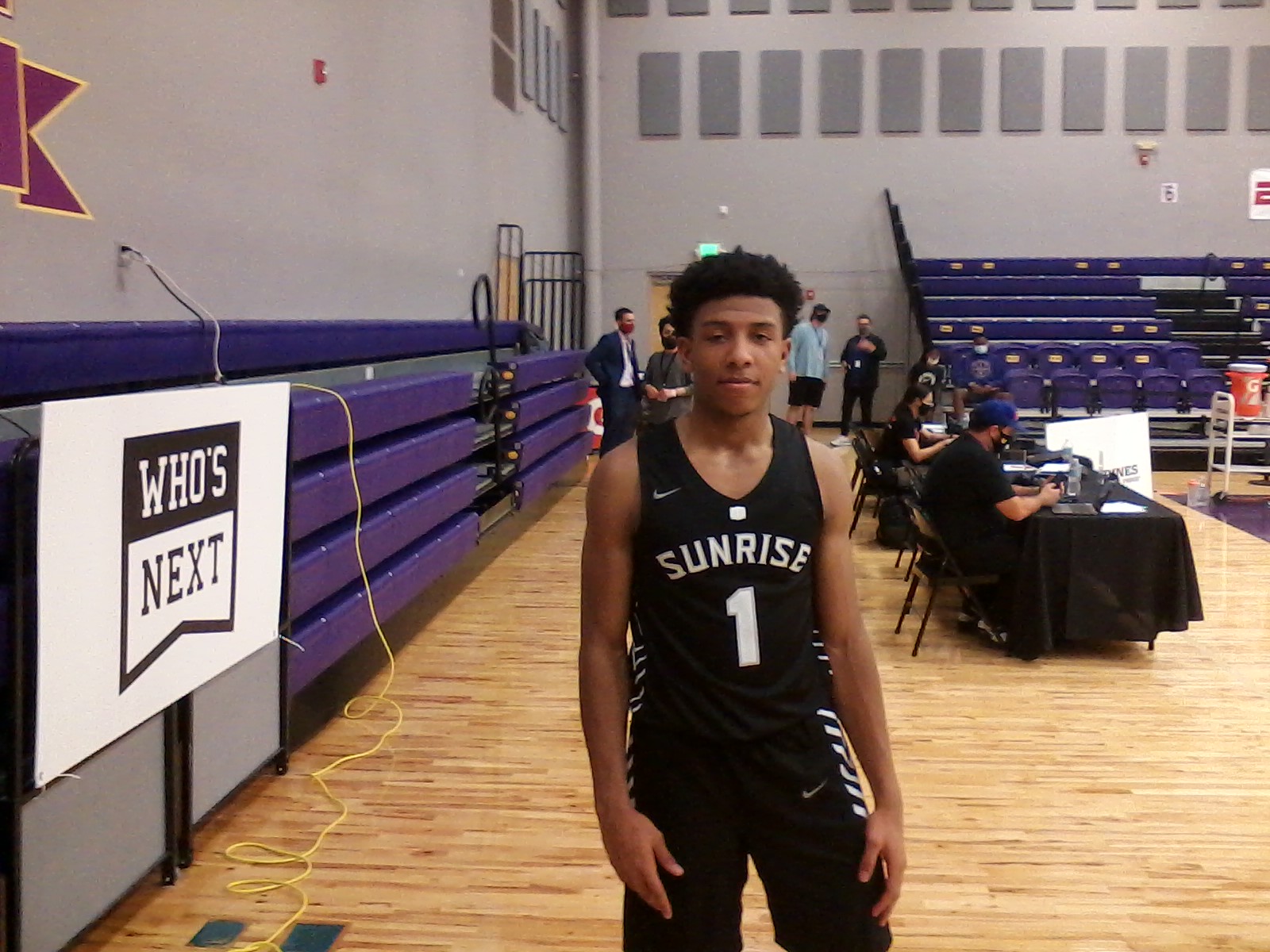 The #1 Montverde Eagles looked to defeat another top three team in #3 Sunrise Christian out of Kansas.  Montverde won a close contest in mid-January against Sunrise to remain unbeaten.  Sunrise would like nothing better than to give Montverde its first loss of the year on their homecourt.  Montverde was dominant last night against Fort Lauderdale Calvary Christian while Sunrise took out Oak Hill.

Montverde struck first as Dariq Whitehead hit a mid-range jumper.  On Sunrise’s first possession, Kenny Pohto connected on a three.  The next three possessions for each team were empty.  A three from Caleb Houstan of Montverde broke the ice but was quickly answered with a bucket inside from Kendall Brown.  He scored again in transition to give Sunrise a 7-5 lead with 4:40 left in the first.  The Eagles responded with a Ryan Nembhard drive to tie the score then Jalen Duren dunked twice to give Montverde an 11-7 lead with 3:26 remaining.  A floater from Kennedy Chandler (pictured) and a three from Zach Clemence returned the lead to Sunrise but a three from Houstan returned it to Montverde.  Brown dunked inside with sixteen seconds left to tie the score at 14-14, which stood to the end of the quarter.

The Eagles of Montverde lifted off quickly to start the second quarter.  Langston Love dropped in a three, Jalen Hood-Schfino scored on a drive and Love again scored at the rim.  After just two minutes, Montverde led by seven, 21-14.  Clemence finally got Sunrise on the board in the period with a bucket inside but Love responded with a three for the Eagles.  Pohto scored inside for Sunrise to make the score 24-18 with just under five minutes left in the quarter.  A bucket from Love of Montverde was offset by a Pohto score inside.  Montverde closed out the second quarter by scoring the last four points, a three and a free throw from Nembhard.  At the break, Montverde led by double-figures, 30-20.

That lead dwindled quickly at the beginning of the third period.  Sunrise scored seven straight points, four by Brown to make the score 30-27.  Montverde responded with five straight points of their own to stretch it to eight.  Willie Lightfoot hit a three for Sunrise and after each team connected inside, the score was 37-32 in favor of Montverde with 2L47 left in the quarter.  Montverde got transition baskets from Love and Whitehead to push the margin back to nine.  Chandler scored at the rim to draw Sunrise close but Malik Renau of Montverde answered with a bucket inside and after three quarters of play, Montverde was up nine, 43-34.

Sunrise scored first in the final period but Montverde responded in kind.  The lead returned to double digits, 48-38 after Chandler hit a floater in the lane for Sunrise and Duren completed a three-point play for Montverde.  The game changed at that point.  All of a sudden, the Sunrise press slowed the Eagles down.  Over the course of five minutes of game time, Sunrise ripped off a 14-3 run to take a 52-51 lead with just under two minutes two play.  Montverde got the lead back with a Duren dunk inside then upped it to four with a three from Houstan.  Gradey Dick hit a three for Sunrise to get back within one but Montverde looked good after Houstan hit a pair of free throws with seven seconds left to make it a three-point game.  Instead of fouling to send Sunrise to the line for just two shots, Montverde played defense straight up.  It cost them, as Chandler hit a three before the buzzer to send the game into overtime tied 58-58.

In last week’s OT game vs. Compass Prep out of Arizona, Montverde scores the first six points and didn’t look back  This time the situation reversed.  Chandler scored on a drive, Brown drilled a three to beat the shot clock and scored again inside to make the score 65-58 with 1:35 remaining.  Montverde crept back into it.  Love converted a three-point play and Houstan hit two free throws to get within two.  Chandler returned it to a two-possession game with a pair of free throws.  Nembhard drew a foul with sixteen seconds left and connected on a pair from the charity stripe.  Somehow, Montverde forced a turnover and Nembhard drew another foul with ten seconds left and a chance to tie the game.  He missed the first and made the second, closing to within one.  Forced to foul, Montverde sent Chandler to the line and he connected on both for a three-point Sunrise lead.  Montverde had zero timeouts put enough time to get a solid look if they pushed it.  The Sunrise extended defense kept that from happening and the Eagles last ditch three-pointer was off target.  Sunrise gets a bit of revenge with a 69-66 OT victory.

Brown led Sunrise with 21 points.  Chandler was close by with 19 points while Dick finished with 10 points.

For Montverde, Houstan led the way with 19 points while Love finished with 15 and Duren tallied 13 points