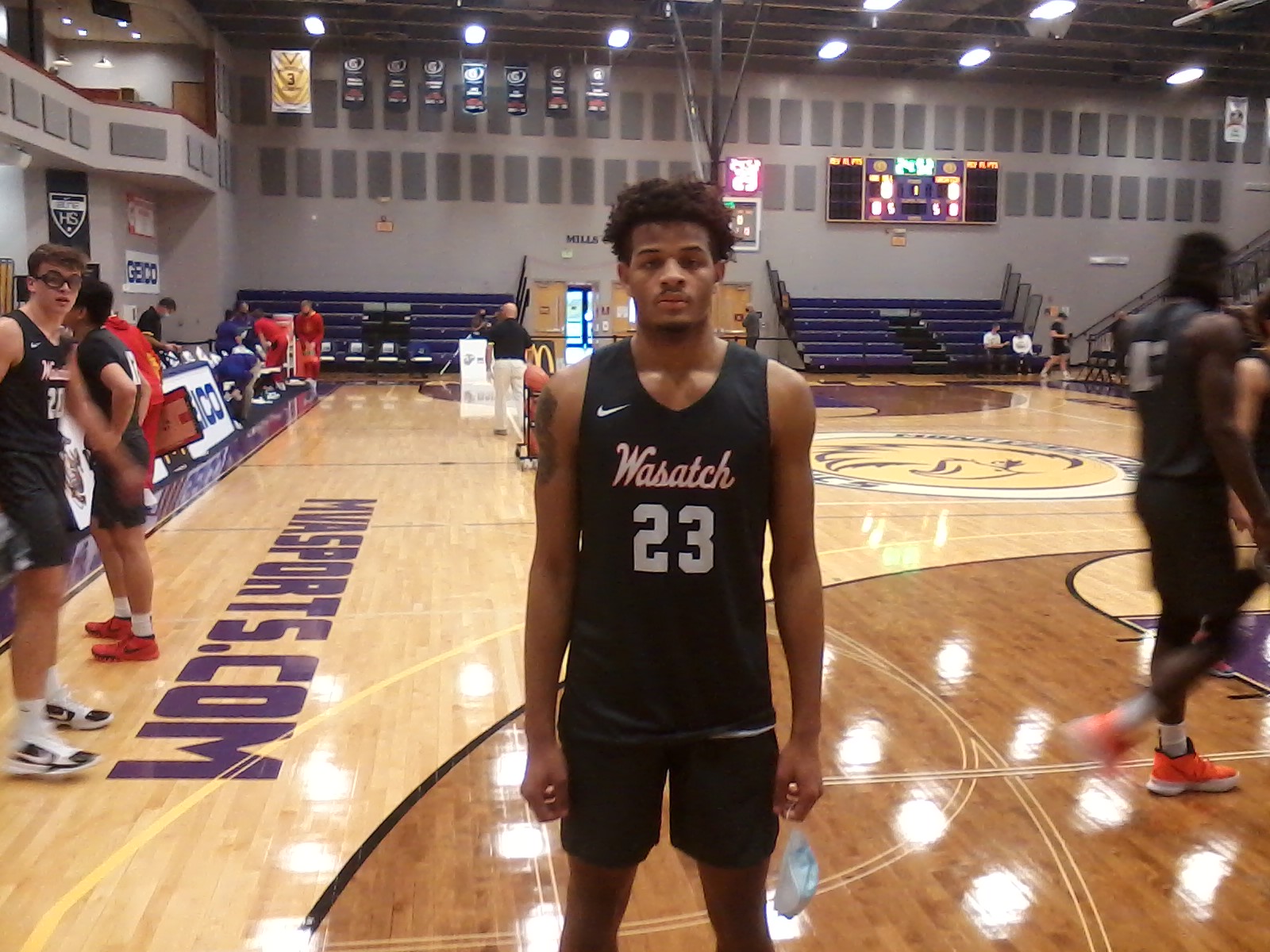 A pair of powerhouses go against each other on the second day of the MAIT-NIBC II at Montverde Academy.  Wasatch defeated Oak Hill by ten in last week’s session of the MAIT-NIBC.  Last night, Oak Hill lost to Sunrise Christian Academy while Wasatch got by La Lumiere.  The Warriors of Oak Hill hope to get back on the winning side of things while Wasatch wants to continue to win here in Central Florida.

Wasatch got on the board first with a transition basket from Roddy Gayle (pictured).  Oak Hill answered quickly as Jalen Ricks put back a miss.  Fousseyni Traore put back a Wasatch miss and Robbie Armbrester hit a free throw but Oak Hill got back to within one after Jalen Ricks hit a pair of free throws.  At that point, Gayle went on a personal 7-2 run as he scored on a drive, hit a three, and put back a miss while all Oak Hill could manage was a transition basket from M.J. Rice.  Wasatch now led 12-6 with under four minutes to play in the first quarter.  Oak Hill cut that margin in half as Rice hit a free throw and Ricks scored on a drive.  Back came Wasatch with a pair of buckets, one from Traore and a jam by Armbrester.  Oak Hill was quick to respond.  They tied the game at 16-16 as Caleb Foster hit a three, Xavier Brown had a steal and score and Rice hit a pair of free throws with thirty seconds left in the quarter.  A three from Richard Isaacs of Wasatch broke the tie but Rice hit two free throws very quickly for Oak Hill.  Gayle was fouled and connecedt on a pair of free throws to lead by three but Foster of Oak Hill dropped in a three to tie the game at 21-21 after one period of play.

Wasatch opened up an early five-point lead until Foster dropped in a three for Oak Hill.  Nolan Hickman hit a three for Wasatch and the back and forth continued.  With just over four minutes to play, Wasatch led 34-30.  That’s when things went south for Oak Hill.  Wasatch put together a 7-1 run, highlighted by a transition slam from Brennan Rigsby to lead by ten at 41-31.  Oak Hill mounted a mini-run of their own, crawling back to within four, 41-37, with six points coming from Rice. Wasatch wasn’t done.  They closed out the second quarter with a 7-2 run, starting with a three from Armbrester and capped off with a pair of free throws after a steal by Gayle. At the half, Wasatch was up by nine, 48-39.

Oak Hill scored the first four points of the third period as Camryn Carter hit a long two and Rice slammed home an offensive rebound.  At that point the wheels came off for Oak Hill.  Wasatch put together a 16-5 run over the next five minutes of playing time.  It started with a steal and score by Hickman and ended with a pair of free throws from Hickman.  With two minutes left in the third, Wasatch was up big at 64-48.  Oak Hill got a putback in the last minute while Wasatch got a free throw from Issacs to make the score 65-50 with one quarter left to play..

If the wheels came off for Oak Hill in the third quarter, the car got towed away in the fourth.  Wasatch scored the first seven points of the period as Rigsby hit a three, Keba Keita scored inside and Casey Jones hit a pair of free throws after an intentional foul on Oak Hill.  Now the margin was twenty-two, 72-50, with 5:41 left to play.  Oak Hill wouldn’t break that twenty-point plus margin until a minute was left in the game and both teams had emptied their respective benches.  Wasatch would win comfortably 84-69.

Gayle and Hickman led Wasatch with 19 points each.  Isaacs finished with 15 points while both Armbrester and Traore each scored 10 points.

For Oak Hill, Rice was the high scorer with 22 points while Brown finished with 10 points.

Oak Hill was outrebounded 43-30, including 16-9 on the offensive glass.