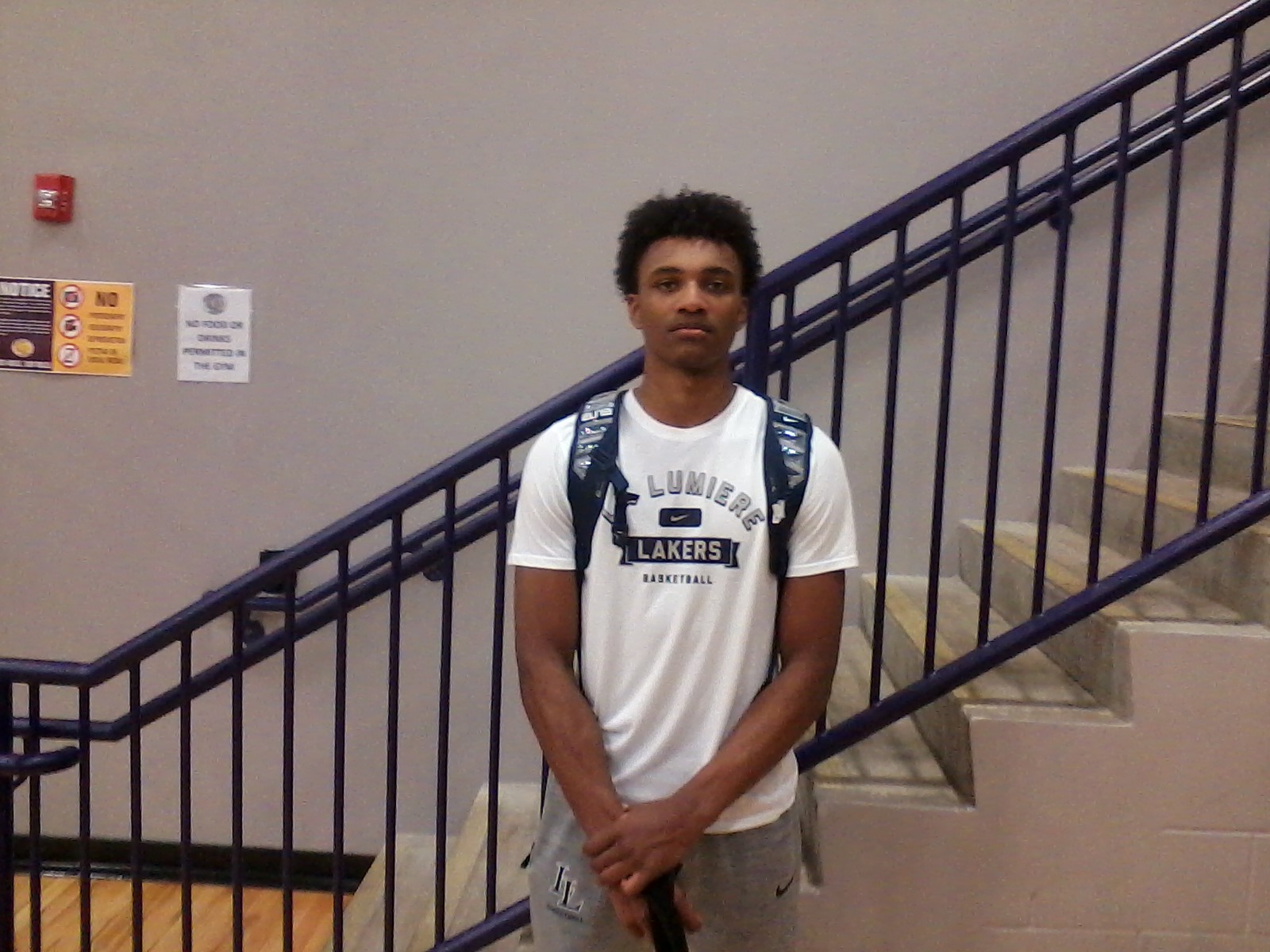 In the final game of Day Two, La Lumiere took on Calvary Christian.  Both teams have been in various national rankings this season.  La Lumiere has had mixed results in the NIBC.  Calvary Christian finished second in a loaded Beach Ball Classic back in December, but their three games here are a big step up in competition.  Both teams lost on Thursday so both are hoping that tonight will be a win and the start of a long winning streak.

Marvel Allen got Calvary on the board first with a pair of free throws.  Lumiere responded with a pair of free throws from Treyton Thompson.  After a mid-range jumper from Taylor Hendricks gave Calvary a 4-2 lead, Lumiere took off on a 12-0 run.  J.J. Starling (pictured) dropped in a three to start it and Chisom Okpara scored inside to finish it.  With 1:34 remaining in the opening period, La Lu was up 14-4.  Calvary responded with six quick points as Allen hit two more free throws, Gregg Glenn scored on a drive and Carl Cherenfant also scored at the rim.  Now it was 14-10 with just over thirty seconds remaining in the quarter.  Starling dropped in a three to make the score 17-10 after one quarter of play.

Vincent Iwuchukwu of La Lu scored inside to push their lead to nine.  A drive by Cherenfant and two free throws from Allen got Calvary back to within five.  Allen then dropped in a three coming off a ball-screen to make it a 19-17 game with 4:26 remaining in the second quarter.  Back came La Lu, with five points from Starling and a transition basket from Okpara.  This put La Lu up nine at 26-17.  Glenn scored on a drive for Calvary to stop the bleeding, but only for a moment.  Okpara hit a surprising three, Starling scored on a drive and Jeremy Fears dropped in a three to push the lead to fifteen at 34-19.  Calvary scored the final basket of the half on a mid-range jumper.  At the break, La Lumiere was in control by the score of 34-21.

Four quick points by La Lu increased their lead at the beginning of the third quarter.  Tyler Hendricks hit a floater in the lane for Calvary’s first basket of the period and after Starling scored on a drive for La Lu, Calvary cut the deficit some more with a dunk inside by Chrenfant and a thre- point play from Glenn to make the score 40-28 with just under four minutes left in the quarter.  La Lu hit a free throw but Glenn scored off a putback to draw Calvary closer.  However, La Lu responded and with 1:09 left in quarter they were up by fourteen, 46-32.  Calvary would not back down, closing the quarter on a 6-1 run as Glenn had a steal and score, Dylan Canoville did the same and Cherenfant scored in transition just before the horn sounded.  Heading into the final period, Calvary was down just nine, 47-38, but seemingly on a roll.

That roll continued as Cherenfant scored on a drive and Tyler Hendricks dropped in a three for Calvary at the start of the fourth.  All of a sudden, the margin was only four at 47-43.  La Lu squashed that run with one of their own, a 6-0 run with all of them being dunks, two by Iwuchukwu and one for Fears.  This made it a ten-point game at 53-43.  Allen hit a pair of free throws for Calvary and after Okpara scored inside for La Lu, Allen dropped in a three to make the score 53-48 at the four-minute mark.  After the media timeout, Okpara scored inside and Starling scored on a drive to make it a nine-point contest, 57-48.  Calvary kept coming as Glenn scored inside and Taylor Hendricks dunked one home to make it 57-52 with just under two minutes to play.  La Lu’s Iwuchukwu scored inside and after a miss by Calvary, time was starting to be their enemy.  They had to start fouling and La Lu went three of four from the strip over the last thirty seconds.  Calvary got a late drive from Glenn to make the final score 61-54 in favor of La Lumiere.

For Calvary, Glenn had 15 points, Allen tallied 14 points and Cherenfant finished with 12 points.