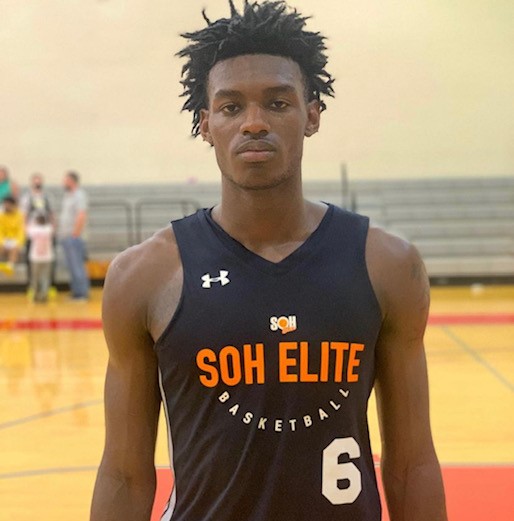 This past weekend, the King of My City event took place at the Gamepoint Events Center in Orlando.  It was a full weekend of exciting hoops action.

A couple of unusual games to mention before we get into some of the better individual play.

SE Elite 3SSB 15U came into their 9AM contest with just five players after a “tumultuous” week.  Midway thru the first half and leading by a possession or two, Jaylen Robinson took a hard fall after a transition basket attempt and stayed down after play went the other way.  He limped off the court but it was clear he wouldn’t be returning.  SE Elite continued to play with four vs five and as one might expect the team found themselves down at the break.  It was decided then that SE Elite would not play the second half with just four players, despite the protests of players and parents.  It was the right decision.  The team got some extra players in before their second game of the day but for a while there was some concern about their participation the rest of the weekend.

In a game late in the evening, SOH Elite 16U “spotted” their opponent a 19-0 lead at the start of the contest.  It was SOH’s third game of the day, so while the team’s poor start was surprising, it wasn’t a complete shocker.  To their credit, the South Florida squad didn’t give up or mope.  They dug a little deeper and took advantage of the opponents’ over-confidence.  SOH surprisingly came all the way back and had a three point lead with under ten seconds to play.  Their opponent drilled a three with seven seconds left to tie the score at 70-70 and it looked like overtime might be in order.  After a timeout, SOH’s Max Turner found himself with the ball on the baseline with two seconds left.  He turned and flipped in a shot that fell through the net just as the horn sounded to give SOH a comeback win that one doesn’t see often at this level of basketball.

Dylan Canoville, SOH Elite 17U: A 6’5 senior from Calvary Christian in Fort Lauderdale, he may be looking to take a prep year to solidify his perimeter skills should the right collegiate offer not come along this spring or summer.  Canoville is very strong and athletic and has the ability to control games within fifteen feet of the rim.  An offensive rebounder deluxe, he uses long arms and explosive leaping ability to beat opponents to missed shots.

Elijah Mahi, 1 Family 17U: A 6’7 junior at Jacksonville Potter’s House Christian Academy, Mahi is a matchup problem.  He is too big for smaller “3s” and too skilled and quick for bigger “4s”.  Mahi is able to stretch the floor with his shot or drive from the high post and short corners, finishing through contact once at the basket.  He is also an effective offensive rebounder.

Moises Bolanga, CP 25 North 17U: A 6’4 junior from Bishop Snyder in Jacksonville, he had quite an impressive performance on Saturday.  Using strength and speed, he consistently got by his defender into the lane and made the right read as whether to score or give the ball to a teammate for an easy assist.  Bolanga also made open shots from the perimeter, aggressively rebounded the ball, and dug in on defense.

Jah Nze, CP 25 National 17U: A 6’2 junior from Hagerty in Oveido, Nze can light up the scoreboard when he is on.  He has become better at mixing in drives with his jumper, making it much harder for the defense to contain him.  Nze has improved as a passer in finding open teammates when his avenues to score have been cut off.  He uses his strong build to rebound successfully against bigger players.

Jamar Houston, Team Orlando 17U: A 6’2 junior at Central Florida Christian Academy in Orlando, the term “explosive athlete” barely begins to describe Houston.  He is a way-above the rim finisher and a surprisingly competent three-point shooter.  Houston has great potential to be a disruptive perimeter defender at the collegiately level.

Dylan James, 1 Family 16U: A 6’8 sophomore now back at Winter Haven, James has a very high ceiling.  He can step out and score from the three-point arc or post up inside.  James is fast up the floor in transition and pursues offensive rebounds with a hunger.  Defensively he is a good shot blocker/shot challenger and can switch out and guard smaller defenders on the perimeter.

Karmello Branch, Team Speights 16U: A 6’4 sophomore from Tampa Catholic, Branch came into the weekend with somewhat of a rep as a catch-and-shoot guy and left with observers knowing he has a varied offensive arsenal.  He scored on drives, got to the free throw line, and got a lot of second chance points on put backs.

Julien Clark, E1T1 15U: A 6’0 freshman at Orlando Christian Prep, he could be “next” out of OCP.  He is very good with the ball, pushes the pace and makes excellent decisions.  He scores and distributes equally well and plays hard at both ends of the floor.