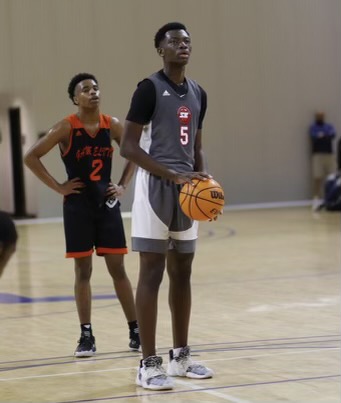 James Morrow, CP 25 North 17U: A 6’7 junior out of Jacksonville Jackson, Morrow is long, athletic, and active on the interior.  He is a rim-runner, quick off the floor for rebounds and to challenge shots.  He scores mostly on putbacks and lobs but has shown that he can knock down short range jumpers if the occasion arises.

Adrian Cruz, SOH Elite 17U: A 6’3 junior out of Miami South Dade, he is a wing that scores in a variety of ways.  His jump shot is reliable out to the arc and he is a crafty driver and strong finisher on the break.  Cruz plays with a chip on his shoulder and is a real pest on the defensive end.

Jaylan Smith, 1 Family 16U: A 5’10 sophomore from Orlando Edgewater, Smith is a problem for opposing defenses.  He is quick and strong, gets up high in his jumper, and scores at all three levels.  With the ball in his hands, he puts defenders on skates.  Smith is able to finish above the rim on the break and had a highlight reel lob that nearly emptied the gym.

Eric Navarre, CP 25 National 17U: A 6’2 junior from Kissimmee Central Point Christian, Navarre is a good athlete with a strong frame.  He rebounded well against bigger players, made perimeter shots and finished strong in transition.  Navarre is relatively new to the states so it was a good first outing for him.

Max Turner, SOH Elite 16U: A 6’5 sophomore from Weston Cypress Bay, either he finds the ball or the ball finds him.  Turner comes across as the ultimate glue guy, seemingly making the right play at every opportunity and never forcing the issue.  He is a solid scorer from fifteen feet and in, rebounds at both ends and is a reliable ball-handler and passer.

Xavier Peavey, CP 25 Tampa 16U: A 5’11 sophomore from Tampa Durant, Peavey is quick with the ball, pushes the pace and gets into the paint.  He made enough open shots this weekend to force defenses to play up on him, allowing him paths to the rim.

Kyson Pruett, Loyalty United 16U: A 6’1 sophomore from Windermere Prep, Pruett was a very impressive perimeter shooter on Saturday.  He has excellent shot prep and a quick release.  The ball looks like it is going in every time.  Pruett handles the ball adequately vs. pressure and he puts in a good effort on defense.

Tyler Johnson, E1T1 15U: A 6’5 freshman from Apopka, Johnson is a good athlete that moves well, runs the floor, rebounds out of his area and challenges shots inside.  His perimeter skills are developing and he make the most of his scoring opportunities in transition or chasing down offensive rebounds.  Johnson has a high ceiling based on his athletic ability and rapidly developing skills.

Carl Parrish, CP 25 16U: A 6’1 sophomore from Miami Norland, Parrish had a solid run at the point guard spot this weekend.  He pushed the pace and got the ball where it needed to go.  Parrish got his teammates involved early in the game but also made open perimeter shots and drove hard to the basket when the opportunity presented itself.

Fredy Sylla, SE Elite 15U: A 6’6 freshman from Potter’s House Christian Academy in Jacksonville, Sylla is a smooth wing that gracefully gets to the basket on drives.  He is an improving perimeter shooter, a grab-and-go rebounder and versatile defender.

Lorenzo Cason, 1 Family 15U: Only got to see the team play half of a game but the 6’0 freshman now at Victory Rock Prep in Bradenton was highly productive for those sixteen minutes as he drained four of five shots from beyond the arc.  Cason proved to be fast up the floor in transition and his lob pass for a dunk on the break was on-target and catchable.