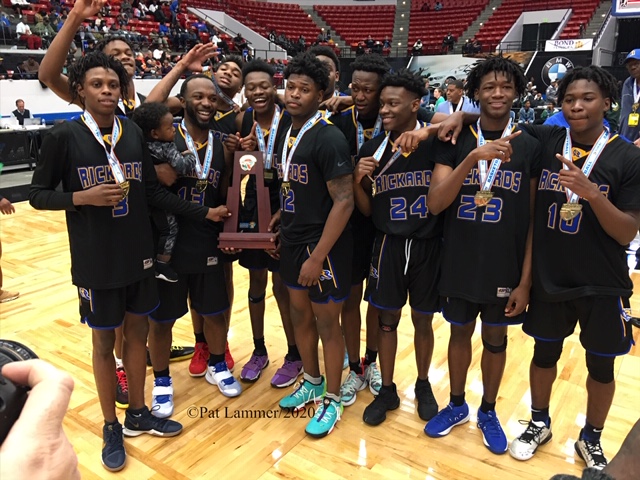 Bartow finished the season with only one blemish, a loss to Santa Fe Catholic early in the year.  The Yellow Jackets get this nod not because they were so much more talented than the rest of the field but because of their resiliency and toughness.  After a three point regional final win at home over Hillsborough, Bartow got past a very good East Lake team and then defeated perennial power Dillard in overtime to grab the state title.  While the inside/outside duo of senior Josh Simmons and junior Walter Clayton got the most recognition, this was a team where every player understood their role and performed it at their highest possible level.

We identified Rickards out of Tallahassee as a favorite in their region at the start of the season.  However, after watching Jacksonville Lee play in January, it seemed that the Generals would have the inside track to Lakeland.  Rickards may have had the fewest wins of any state title winner (21; next lowest was 24), but they came into the playoffs peaking at the right time.  They beat Lee in Jacksonville to reach Lakeland, then defeated an athletic Sebring team in the semis before dispatching heavily favored Pembroke Pines Charter by seven to win the title.  Rickards set the tone on the defensive end, using that to fuel their offense.

#1 Seed: Bartow – Not dominating physically but their toughness and tenacity puts them at the top spot

#2 Seed: Orlando Christian Prep – Arguably the most talented and deepest team of the seven state champs.  The Warriors have the ability to defeat teams in a variety of ways.

#3 Seed: Boca Raton St. Andrew’s – The way Yussif Basa-Ama played in Lakeland gives St. Andrew’s a player that is difficult to match up with.  Add in the versatility of Josh Minott and the excellent chemistry the team played with all season long, St. Andrew’s would be a tough out for any team.

#4 Seed: Miramar – One could choose either the Hurricanes or Stranahan for this spot and not be wrong.  With David Herard going down with a knee injury in the regionals, it just seems that a healthy Miramar has the slightest of edges in the match-up.

#5 Seed:  Fort Lauderdale Stranahan – The Dragons are back-to-back winners in two separate classifications, having won 6A last year and then after re-alignment, Class 4A this season.  The team got a big lift from junior Thaddeus Squire in Lakeland, but the senior leadership of Chayse Culpepper, Inady Legiste, Dequan Vickers and David Herard (before the injury) was key to the repeat.

#6 Seed: Tallahassee Rickards – Are we under-selling them again? Possibly.  The defense is undeniable but offensive consistency may be a question mark.

#7 Seed: Hawthorne – A lack of size and depth puts them here but there is little question they would give any of the above a tough game.

Below is an early look at who the top team and top player in each classification may be heading into the 20-21 season.