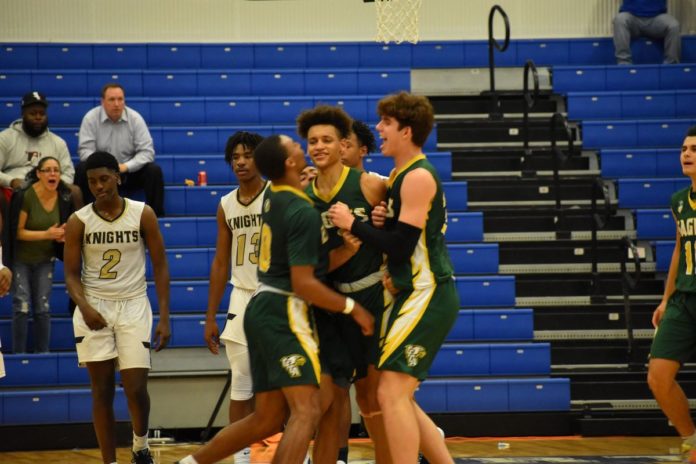 Torey Buie, Hawthorne: The 6’1 senior used his speed and quickness to cause havoc on both ends of the floor.  Offensively, he was an attacking slasher to the basket that broke down defenses and generally made the right shot vs. pass decision.  Defensively, he converted many steals into scores as well as disrupted offenses with his presence in the passing lanes.

Riley Kugel, Orlando Central Florida Christian Academy: The near-6’5 sophomore was a revelation this past season in guiding CFCA to a regional final.  Playing the point guard spot, Kugel displayed excellent court vision and a high basketball IQ in creating scoring opportunities for his team.  He also proved to be a deft scorer, averaging just over 16 ppg while shooting 50+% from the field overall, 40+% from beyond the three-point line and 80+% from the foul line.

Fanbo Zeng, Windermere Prep: A native of China, the 6’9 sophomore made great strides from his freshman year.  His ability to play on the perimeter allowed the Lakers to use a twin towers approach and it got them to a regional final.  The lefty is a solid ball-handler and passer, reacts well on the defensive end to challenge and/or block shots, and has the ability to be a grab-and-go rebounder.  Zeng is another player that averaged in double-figures (15.5 ppg) while scorching the nets at a sizzling 60% overall from the field, 47% from beyond the arc and 86% from the foul line.

Jalen Cooper, Anclote: The 6’6 senior was a versatile performer for a team that made it to a regional semi-final.  At times, Cooper was the team’s point guard and at times he was the primary scorer.  At all times, he was their go-to guy.  Averaging a double-double at 23 points and 11 rebounds a contest, Cooper was also a force to be reckoned with on the defensive end.  His generous wing-span and quickness made doing anything with the basketball in his presence a challenge.

Teron Haywood, Jacksonville Lee:  Lee was one of the better teams in the state regardless of class this season and the 5’10 junior had a lot to do with it.  While opponents focused on stopping teammate Alex Fudge, Haywood worked his ball-handling and passing magic to score or create easy opportunities for his teammates.  Unflappable against pressure, Haywood broke down extended defenses, controlled the pace of the game, and made the most of his offensive opportunities.

Kenney Gaines, Lake City Columbia: We admit that Columbia didn’t get the recognition it most likely deserved during the regular season, but the 6’3 senior made sure all that changed with his performance in Lakeland.  His regular season stats state he averaged roughly 12 points a contest, but he doubled that in the semis vs. Dillard.  Gaines has an uncanny ability to score in the lane.  He also does a great job of making plays for his teammates but when Columbia needed points, he got them. Gaines plays extremely hard and thrives in big moments.

Ladarrion Cleveland, Sanford Seminole: The 6’2 senior led Seminole in scoring this season at just over 16 points per game, but he had a few scoring outbursts that made people sit up and take notice.  He had 31 points in an early season matchup against future region participant Lake None, hitting five shots from deep.  He was also a key part of a relentless pressing defense that forced a lot of turnovers that became easy points for Cleveland and his teammates.

A.J. Staton-McCray, Orlando West Oaks Academy: A member of Ely’s state title time in 2019, not much was known about Staton and what he could do if “turned loose”.  Well, a move to West Oaks Academy turned him loose and proved him to be at least a mid-major college prospect.  Staton can fill up the score book from either beyond the three-point line are get to the basket and score through, around, or over defenders.  He is also a rock-solid defender, both on and off the ball.  In the span of one year, he pretty much went from unknown to coveted as a recruit.