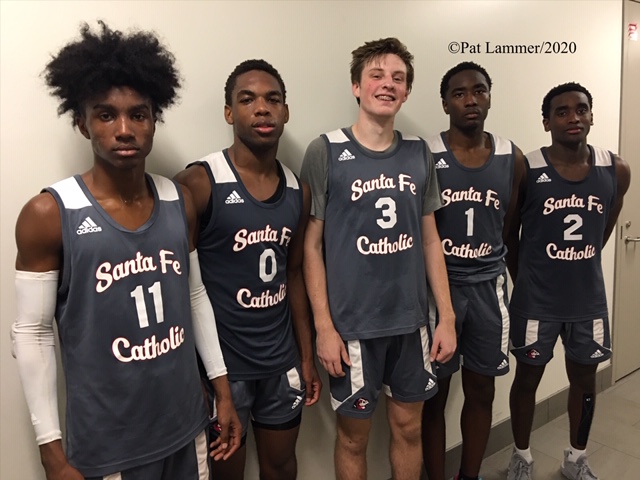 JACKSONVILLE — Lakeland Santa Fe Catholic, a senior-laden squad ranked No. 1 overall by the FHSAA in the latest boys basketball rankings, took down Jacksonville Paxon, 53-37, Friday on Day 1 of the Duel in Duval on the campus of the University of North Florida.

Six-foot-1 senior point guard Ray Davis excelled in leading the Hawks to their 18th victory in 20 games. Davis led a balanced attack with 15 points, 6-4 Joe Stubbs had 12 and both Javon Bell and Antwan Walker had 11 points.

Davis is a 1,000-point scorer for coach Mike Blicher.

“Ray Davis, unbelievable kid off the court first,” said Blicher, in his fourth year. “Three-point-five [GPA], 1220 SAT. Right now he’s got an NAIA offer and a D-1 JuCo offer from Albany Tech [in Georgia] and Aquinas College up in [Grand Rapids] Michigan. I don’t understand why D-2s aren’t all over him. He competes, he’s got athleticism, he’s got a body coming — that’s a work in progress. But you have the grades and you just have the leadership. He’s got everything I would want in a point guard.”

Class 3A SFC’s two losses are to Winter Haven and Lakewood Ranch.

“We came up here for the competition and it’s right when we are coming off a couple losses,” Blicher said. “So it’s a good test to see what are we going to do. Are we going to pout and go through a rough stretch or are we just going to turn it around? And tonight was great effort. I don’t think it was the cleanest game for either team in terms of execution but they were competing at a high level and we did not back down.”

Deandre Devaughn, a 5-8 2020 guard with Jacksonville Robert E. Lee High, canned five 3-pointers on the way to a 24-point performance in the overtime victory over Tallahassee Lincoln.

Devaughn does a lot of things well. He came into the game averaging 16.2 points, 2.5 steals and 2 assists.

Asked if coaches on the next level were looking at Devaughn, Jenkins said: “Some, but not enough.”

Jacksonville Lee coach Stephen Jenkins is in his 29th year as a head coach. He told me this would be his last season.

Six-foot senior guard Zae Wiggins scored 18 points vs. Jacksonville Lee. Wiggins — who has grown an inch and a half this year — is still searching for that first scholarship offer.

“I’m real surprised at [the lack of attention for] Zae, because he’s the consummate point guard,” Lincoln third-year coach Matt Anderson said. “He’s a three-year starter, his sophomore season he started on a very talented team my first year there. He shot 43 percent from the 3 that year. It’s gone down a little bit since’s he gone to point because so much focus is on him and he puts in so much work. He can pass it, he can handle it, he can shoot it, he can score in between, he can go by people, he plays great defense.”

2020 Jadan Glass added 15 points and 2021 David Ganious had 14 points, including the 3-pointer that tied the game at the end of regulation.

It was just Tallahassee Lincoln’s third loss in 19 games. The other two were to Miller Grove (Ga.) by 5 and Oviedo Master’s Academy by 1. That’s three losses by a total of 12 points.

“We’re close to where we need to be but we’ve still got a lot of areas [16 turnovers today] we need to shore up and improve on I feel like,” said Anderson, who was a part of six titles at Malone High. “But I feel like we are getting there.”

PROVIDENCE PUTS IT TOGETHER

Providence rolled past Central Florida Christian. “It was one of our better games,” said coach Jim Martin. “Solid guy in the lane. Not turning it over as much.”

J. Lee Repass is a nice prospect in the paint. Georgia Tech, Wake Forest, Furman, Siena and the entire A-Sun is involved with Repass.

ALL THE WAY TO THE BUZZER

Impact Christian played IMG Blue right to the buzzer but missed a shot at the horn in the one-point loss.