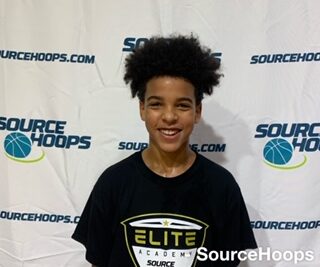 Tristan Gross, Clearwater Calvary Christian: The 6’3 sophomore played only one game as he tweaked his ankle early in his second contest of the day, but certainly showed enough to be considered one of the better prospects in attendance.  A very good perimeter shooter with a quick release, Gross made several “stop and pops” on the day.  He is good with the ball and finishes well with either hand around the basket.  While not blessed with blazing speed, Gross knows how to use change of pace and change of direction to get to where he wants to go on the court.

Jordan Mikell, Jacksonville Impact Christian Academy: There is a lot to like about this 6’6 sophomore.  A tough rebounder at both ends of the floor, he keeps after misses until the ball is secured.  He gets up and down the floor quickly and finishes in transition well when opportunities come his way.  Mikell also showed he could score in traffic, whether it be off offensive rebounds or after receiving the ball once he cut into the lane.  His perimeter skills are still developing but there is certainly time for that.

Chris Cornish, Punta Gorda Charlotte: The 6’4 freshman is an active rebounder and rim attacker.  He is quick to the basket once receiving the ball and doesn’t mind the pushing and shoving that takes place once he gets into the lane.  Cornish has a good touch inside and, if he doesn’t score, he usually earns a trip to the foul line.  He has a nose for the ball coming off the rim at both ends of the court.  Once his perimeter shot becomes a consistent weapon, his progress will take a giant leap forward.

Chris Brown, Orlando Geneva School: This 5’8 freshman is exciting and fun to watch!  He combines great speed and quickness with superior ball-skills to create scoring opportunities for himself or teammates.  Brown has deep range on his perimeter shot but also has a reliable floater in the lane.  He makes good pass vs. shot decisions when driving the basketball.  Defensively he has active hands and feet and makes the opponent work very hard to advance the basketball.  While Brown may be small in size, he plays with a big heart and an even bigger chip on his shoulder.

DeAndre Newland, Daytona Beach Mainland: It is all about potential and upside for this 6’10 freshman.  He surprisingly has good hands and made some tough catches on the move this past weekend.  As one would expect, he blocks shots and rebounds his area on the defensive end.  Offensively, Newland can score inside if not played physically.  He is still getting used to his body so there are instances where his movements are a tad awkward, but that will diminish over time.  Newland’s best is yet to come.

Greg Spate, Coral Springs HS: Saturday was a good day for the 6’6 sophomore.  He shot the ball very well from long range, something we hadn’t seen from him in the past.  Spate made shots off the catch and the dribble and his stroke looked smooth and sure.  Long and a good athlete, Spate made defenders pay if they overplayed his shot, using a quick burst to get to the rim and score.  Despite a thin frame, he rebounded well and was quick to push the ball up the floor in transition.  With his physical traits, Spate can defend a variety of positions.

Julian Grandville, Fort Lauderdale University School: We’ve now seen this 6’3 freshman on a few occasions and each time he has delivered.  A solid ball-handler, he uses head & body fakes often to either create space to get his shot off or shed defenders and get to the basket.  Grandville shoots the ball well from the perimeter and generally makes good shot vs. pass decisions on drives to the basket.