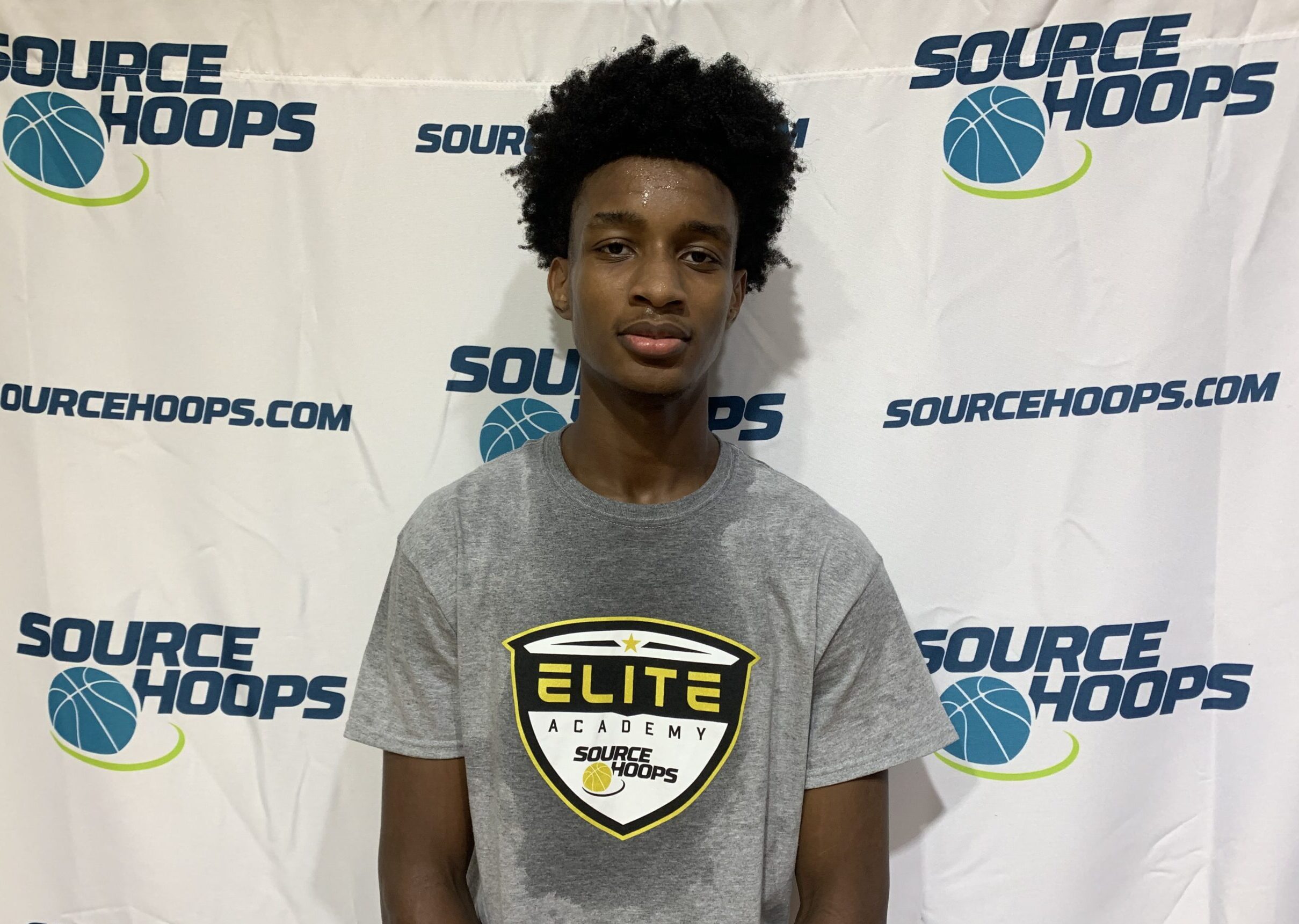 Kris Parker (pictured above), Quincy Crossroad Academy: The 6’6 sophomore was a dynamic presence and considered one of the top 2-3 players in attendance.  The reason?  Parker has all the tools and skills to be a high-level D-I recruit.  His is an excellent athlete with length, plays hard, and has the capability of playing and defending multiple positions on the floor.  Parker is a very good perimeter shooter, both off the dribble and the catch, with his range extending to the three-point line.  He is also a very capable ball-handler and passer.  Parker rebounds well at both ends of the floor, can grab a defensive miss and push it up the court on his own, scoring himself or notching an assist.  Defensively he anticipates well and uses his length and quickness to great advantage.

Elijah Elliott, Orlando Oak Ridge: When we saw the 6’2 freshman a couple of times this summer and fall, he was playing off the ball and was a dynamic scorer.  Saturday, he showed he could slide over and fill the role of facilitator.  A good athlete, Elliott was solid with the ball and quickly got to the basket without over-dribbling.  While he didn’t take many, Elliott knocked down open shots with regularity during the event.

Marcus Upshaw, Palm Beach Gardens Dwyer: The 6’1 sophomore played bigger than his size on Saturday.  He is a quick athlete with length which allowed him to get to rebounds before opponents as well as cover a lot of territory on the defensive end.  He showed a nose for offensive rebounds, speed in transition, and an ability to score at the basket in traffic.

Carter McDole, Montverde Academy: The 6’5 freshman had a good outing on Saturday.  A good straight-line driver and finisher, McDole had a couple of dunks after getting thru traffic at various times.  He also demonstrated a reliable shot out to the three-point line.  An active rebounder at both ends of the court, McDole is quick to outlet the ball to start the break as well as stay after offensive rebounds with quick second and third leaps.

Fredy Sylla, Jacksonville Potter’s House Christian Academy: The 6’6 freshman is an active wing with the ability to score from the perimeter with a jumper or drive strong to the basket and finish thru contact.  A very good athlete and quick leaper, Sylla runs the floor well and routinely beats the defense down court for easy scores.  A capable rebounder both in and out of his area, Sylla has the physical tools to defend inside as well as on the perimeter.

Blaise Wallace, Tallahassee Maclay School: The 6’6 sophomore continues to improve most every time we see him.  He is able to step out and score from the perimeter as well as take smaller players inside and score in the lane.  Wallace has a reliable jumper inside the arc and can get to and score at the rim with just one or two dribbles.  An active rebounder at both ends, he boxes out and is quick to the ball coming off the rim.  In transition, Wallace go score off lead passes at the basket or hit jump shots as a trailer.

Jaden Huygens, Orlando Cornerstone Charter: The 6’1 sophomore is a multi-sport athlete (baseball as well) and it shows on the floor.  A quick and sure ball-handler, Huygens routinely gets by the defense to finish at the basket before help can arrive.  He is also a good passer on the move.  Defensively he is alert for lazy passes into his area and turns steals into scores.